Project Seatpost: between the pain and the gain

Suddenly the sound changed. From the muffled sound of hard metal biting into softer metal it suddenly changed into a much hollower sound. A hollow sound! Excited I gave the screwdriver-working-as-chisel a few more hits. And then I heard "clinck!" and I knew my day was made. I had managed to chisel a part of the seatpost out, and it had fallen into the frame! And from then on it gets easier. Only minutes later I had the rest of the seatpost out too. How close I had been to success the last time I had a sawing session!
It wasn't all over, of course; I sandpapered the very rusty indide of the frame, and cleaned up. Then I pulled out the seatpost from my black bicycle (that's how matter-of-fact it should be!), shoved it in Jon's frame, hung the concomitant lock around it (Jon's lock could be gnawed through by the first passing shrew) and I could be off to buy a seatpost replacement. In theory, that is. 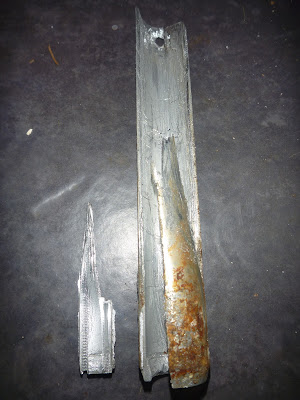 The guy in the bicycle shop asked what size seatpost it was I wanted, so I took out the specimen that was in place. He took a close look, and gained a very puzzled expression on his face. "Now that IS an odd size! That's what you get with these ancient bicycles. They used to have the funniest sizes back in the days. No, we don't have anything of the kind. I'll have to order one...". Ah yes. Of course. The story continues. Typical, by the way, that I liaise with such old bikes that the first seatpost I extract out of one of them is exactly the right outrageous size... 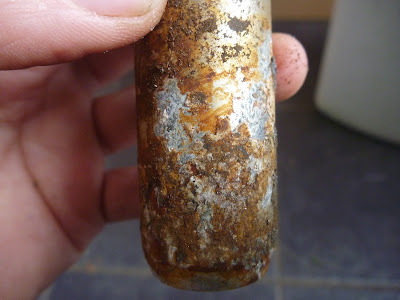 One should not let things go this far
It will be at least a few days before that bike is what it should be, but most of the mission is accomplished: I got it out! And now I'm confident I could get almost any stuck seatpost out. And in a perfect world I'd never need that skill, but the world isn't perfect, and who knows when this will come in handy again!
Posted by Margot at 12:51