Biking gives you exercise! Sometimes in unexpected ways. Some weeks ago I went biking with Jon, who mentioned his saddle actually wasn’t at the right height. And that was just one of these facts of life, as the seatpost was stuck, so it had been at the wrong height for 21 years. And counting.

After the bike ride I seized my chance, and borrowed that bike for the visit of my relatives. If it’s too low for Jon it may well be just right for a Saher! But the whole idea of a bicycle with the saddle stuck at an arbitrary height was more than my Dutch soul could bear. So I tried to loosen it up. The wrong way.

The first thing you do when something is stuck is apply penetration oil. At least, it is in my world. It didn’t work at all. So after many days of oiling and beating up I do the next thing I think everybody does in such case. Resort to internet! I found an interesting site that gave advice. And after some very stern warnings about what NOT to do when inserting a seat post it said “in case of an aluminium seatpost penetration oil is useless. Use household ammonia!”. Bugger.

I bought household ammonia, and tried to apply it; not easy with all that penetration oil in place. It didn’t help at all. The next tip was fixing the seatpost in a vise, and twisting the entire bicycle. I don’t have a vise. Jon doesn’t have a vise. But Big John might have one! He’s a builder, after all. So my plan was to contact him after coming back from Roland. 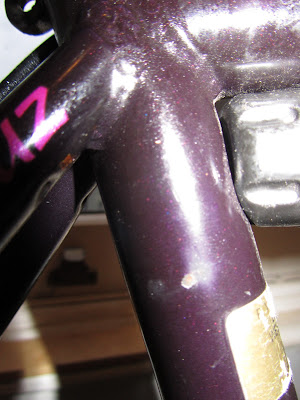 Notice the slight bulge, mainly in the light reflection. I thought it was the outline of the seatpost, but in reality it reaches much deeper.
When I was biking I contemplated things. If we would get that post out I wouldn’t want to insert it again. I think that post has had its chance! But then you’re there with a bike without a saddle. Not very practical. And then I biked, within a few minutes, past Big John’s grave (!) and a B&Q. The former seemed an omen, and I knew the latter would sell the kind of saw you can fit inside a seatpost. So when I was there anyway I went and bought one. And decided I might just as well skip the vise plan and start sawing. Close examination had revealed a bit of a bulge in the frame, which suggested the seatpost had once been forced in, and then it is quite doubtful if anything other than total destruction will undo that. So I left John in peace and directed my attention to that seatpost. 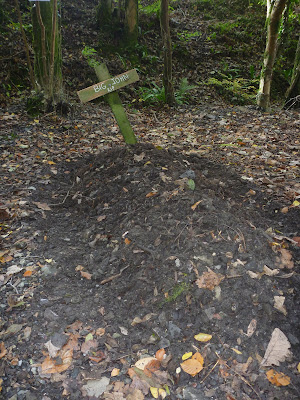 I'm not making it up! They were evidently planning Halloween fun on the bicycle track...
I took a deep breath: as soon as I would start sawing there would be no way back. Then I would have to manage! A bike with a cut-off seat post stuck in it is worth less than nothing. And things were made worse by the fact it wasn’t my bike... but I was strengthened by the thought the website had claimed sawing was fail-proof, and that Tasha’s boyfriend, a certified bike mechanic, had confirmed the authority of that specific website. So there I went! Beheading that bike.

When the saddle was cut off I tried some in-between trick: cool down the aluminium post with a cartridge of CO2. That can only be done when the top of the post is sawn off to gain access. Anyone want to guess if it worked? Of course it didn’t. So sawing it would be! I sawed one cut, and try to “roll up” the post. That is not as easy as one would wish. I decided to saw another cut, 180° from the other one, with the thought that as soon as that post would be two halves with some space in between, it would be possible to pry them out. And would that work? Of course not! The forces holding that seatpost in place must be stronger than anything physicists have ever found. Inspired by yet another website I tried to cut out a smaller section. I managed to cut out a narrow sliver that didn’t reach all the way down. That was all! I decided to saw a third cut. Trying to pry out a 90° section resulted in it breaking off. Great. 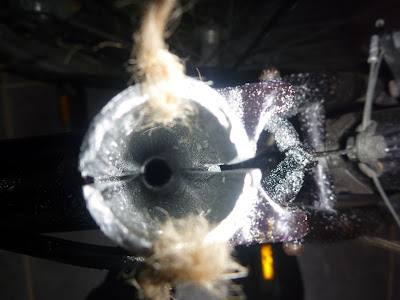 The first cut won't hurt at all... the second only makes you wonder... 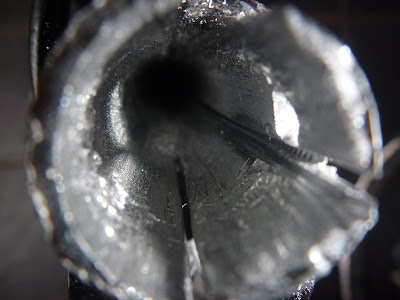 The third will have you on your knees... would Propaganda have been thinking of seatposts when they wrote that?
I also managed to screw up two screwdrivers and a chisel. I went to buy replacements, and pried and sawed on and on, until both sawing blades I had had broken twice. This attack of brutal violence hadn’t done it; maybe just calmly buying more blades, and just leisurely sawing away whenever I had some time to spare, might get me there. In the end. Blimey! Making the world a better place isn’t always a pleasant task. And it's even an academic question; as soon as I have finally managed to get that bloody post out, replace it with a well-lubricated one, fitted a nice and comfortable saddle, and given it back to Jon, he most likely will just let it collect dust in his garage for another 21 years. Oh well. I'd have learned how (not) to solve the issue of a stuck seatpost! 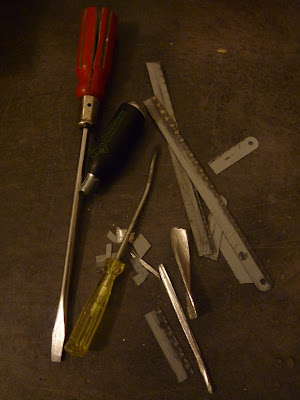 The sawblades and the damage done 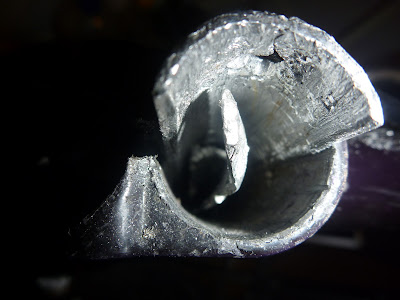 How can a seatpost that looks like this still be absolutely stuck?
Posted by Margot at 08:54