"Happy thanksgiving!" she said, when she gave me a hug. It was clear that for her this was quite a normal thing to say (on this date, anyway), while for me this was a first timer. But that was good!

In the recent year we had a veritable flood of new lecturers, and one of them, Pete, had been living in California for many years before joining us in Plymouth. He had clearly become somewhat American. And he had brought a charming American lady with him. Together they had decided it would be a good thing to celebrate Thanksgiving in Plymouth; the town from which the Pilgrim Fathers had sailed in the Mayflower. It was their survival, after all, that inspired the initial thanks. So Pete and Sabrina invited their colleagues (especially those with a tie with the USA) to come and celebrate with them. And I was fortunate to be one of the invited.

I wondered a bit about the nature of this celebration. Thanksgiving is a bit of a strange thing, as the colonists owed their survival to the local Indians, and we all knew what happened to them. Furthermore; these Pilgrim Fathers had left for these regions only because they found Europe insufficiently religiously rigid and humourless. So Thanksgiving boils down to celebrating the survival of miserable Calvinists at the expense of indigenous people. Yet, hundreds of years have turned it into a celebration of friendship and a feeling of community. A very ambiguous event!

I tried to stay true to both sides of the story. I considered myself the most plausible Calvinist of all present, as I may be an agnostic born from agnostics born from a lot of Catholics and a Lutheran (as far as I know), yet I at least had been born and bred in proper Calvinist territory. So I baked a quiche with an ichthus on top, brought my 16 Horsepower/Woven Hand collection, and told several infidels they would burn in hell. But at the same time I greatly enjoyed the hospitality of our hosts, and the splendid company of the other guests. The evening was somewhat darkened by the arrival of bad news, but there probably was no better place to cope with bad news than this festive abode. 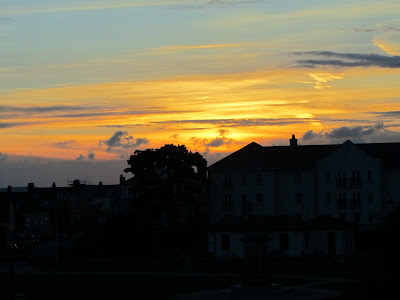 A picture taken from their house on an earlier occasion
The food was excellent, the wine plentiful, and I must say, I am taken by the thought of this American tradition, though I think it is not more than fair to keep in mind at what cost it came about. Wampanoag, you are not forgotten. But if all who have descended from the original disease-spreading colonists would be as hospitable and lovely as Pete and Sabrina then that would make the world a better place!
Posted by Margot at 18:54