In the previous blog post I mentioned that being a scientist means flying ruthlessly across the globe. And I was hardly exaggerating. I was reminded again of how much more than the average citizen I am used to flying when my sister came to visit, and she turned out to have no clue concerning modern day security procedures. I can dream them. I decided to quantify my own behaviour, starting with when I moved to Tromsø. It isn’t technically the moment I became a scientist; a PhD student already is one, but I cannot possibly remember my exact flying behaviour in that time. From my entrance into postdoc life I kept this most excellent blog, which makes it much easier to recall my past behaviour. 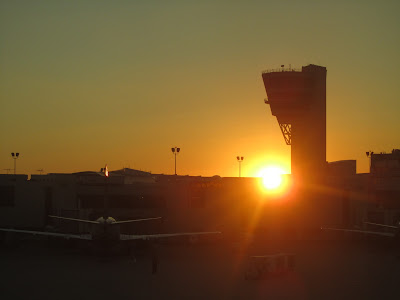 When I was living in Tromsø, which I did for 27 months, I flew 35 times (I count actual flights here, not trips), covering approximately 35000 km. That includes initially moving there. I flew slightly more for private reasons (53%) than business. During my time in Plymouth, which so far has been 15 months, I flew 24 times, coincidentally covering almost the same distance (that's what fieldwork in the USA does!). And 70% of that was business*.

The business flights are hard to avoid. Science demands the gathering of data, and places like Svalbard, Iceland and the USA are not easy to reach by other means than by plane. And we don’t always fly; we drove to Portugal, and Rob drove both to and from the fieldwork in Norway. That we didn’t fly to the Isle of Wight is less spectacular. NERC (the council than funds our project) demands we present the data at conferences, and is there any other practical way to go to San Francisco, for example?

The private flights reduce themselves: in my flight kilometers in my Norwegian time there's a big imprint from having a boyfriend in the Netherlands. But well, that 2000 km distance took care of the relationship, and behold the much lower percentage of private kilometers in my UK time, in which I was single! Can you imagine the carbon footprint if Floor wouldn't have called it a day after less than a year of separation... 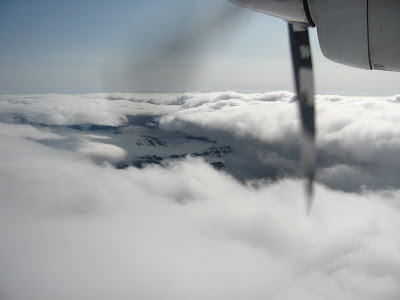 Being single makes the private flights less numerous, but even single I flew 10000 private kilometers in the last 15 months. Most of that was visiting Tromsø, and only 20% was visiting the Netherlands. If science forces you to live in all sorts of different countries, and you still want to see your friends and family, you have to travel far.

Is something likely to change? Fieldwork will still have to be done in earth science, and often there would be no feasible way to travel to the field site involved beside flying. Conferences are not only good for listening to talks and watching posters, which could be done online, but also for having a beer with a specifically inspiring speaker and coming up with future collaboration plans. But perhaps the day may come that air travel becomes either so expensive or so frowned upon, or both, that not flying becomes the standard, unless unavoidable. And if that moment comes, funding agencies would probably no longer demand conference attendance, and allow more time for fieldwork (or rather, for the travel to and fro) in research proposals.

And the living abroad? I think that will not change. Perhaps science will simply become even more incompatible with a private life, and visiting relatives in your motherland will be something a mere scholar can only rarely afford. 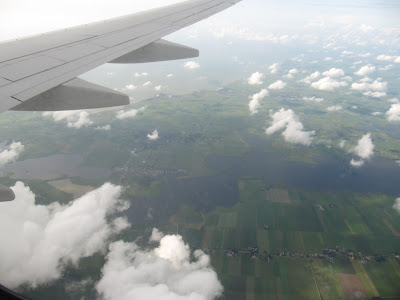 Any sign of change yet? Yes, perhaps! I got both my foreign jobs through a job interview at distance. When I applied for my Norwegian job in 2007, I just used a phone. The job interview for my UK job was more sophisticated: that was done through video conferencing. And though it is a disadvantage (I noticed during the rounds of recruitment here at Plymouth University), my CV proves it’s not impossible to get a job without having to fly all over the world for it. And that’s at least a start!

But what would we conclude? Are climate scientists, who almost invariably fly all over the world, hypocrite bastards? Are they (we!) the victims of overpowering pressure from those who employ them? Should flying scientists be a sacrifice we have to make in return for understanding of the system? Should a conscientious person choose not be to a scientist, in order to be able to maintain a low carbon lifestyle? If you’re a good enough scientist, should you not be so damn good you can demand the right to not go to distant conferences and get away with it? But if you are that good, would that not be a waste? Are we all going to hell anyway, so why don’t we just fly as much as we can; that way we get to see as much of the spectacular damage we are causing as possible? Should scientists, like most other people, just wait until the political will to act on a larger scale comes into being? Questions!


*: these figures are approximations. I just took the distance as the crow flies between the cities I had flown to and from, and in my UK time there's a few trips of which I don't remember if I flew from Exeter or Bristol. The first approximation means I'm hopelessly optimistic, as airplanes don't fly like crows, but the latter would hardly influence the picture.
Posted by Margot at 09:07

That is an awful amount of flying. Bad for both environment and person! Good to hear things have improved.