Did I say proper? This trip was as inproper as a trip can be. I knew it was going to be like that when I was standing outside on the street, awaiting Dave, listening to the clock striking seven and knowing he couldn't possibly make it in time. I also knew Lionel, the famously impatient, would be there. And I knew Ali was the designated person to rig this trip and he would not be there. This was going to be interesting.

The plan was to split in two groups: one descending down the shaft on a rope, the other coming in through the adit, and then coming out on both sides of a collapse. We would then try to re-establish contact. But it didn't work out that way!

We arrived to a parking lot filled to the brim with people in caving gear ostentatiously pointing at their watches. I jumped out, jumped into my oversuit, shoved the rest of my kit in my backpack and stood to attention. By then it had become clear that Lionel had lived up to his reputation and buggered off already with some like-minded people. And, allegedly, the rope.

Dave was going to go into the adit, and desired to drive there, as it could be done. Unfortunately, he was the only one who knew the way, but some quick instructions got the walkers on the way as well. Regrouping where the car had to be left behind we found out the rope was in Lionel's car, and the other rope we had was just, or just not, long enough. So we abandoned the idea of coming in through the shaft and all went into the adit.

As soon as I stepped into the cold water I heard sounds. Lionel cum suis! Soon we reached the guys who were actively prying around in a big collapse. It looked serious, so the rest of us preferred to stay at a bit of a distance. Rick, Lionel and Finbar were using loose bits of tramrails as a sort of battering ram to poke through the collapse. They made quite some progress, but no actual breakthrough! That means they'll be back. It's easy to see why people choose not to engage in such activities, but I'm fascinated, so with a bit of luck I'll be there when they come back. 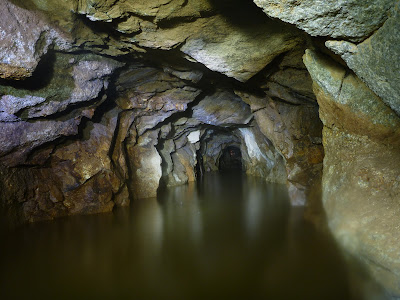 The adit; in the large version one can just see light at the end. The first group! 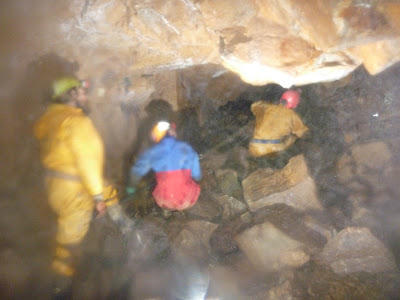 The men, seen through the fog, and their improvised battering ram
When I was not watching in a state of mild bewilderment at the somewhat defiant activities of the men I amused myself by running around trying to take pictures. The short lengths of tunnel we had at our disposal were clogged with cavers, as we had en enormous turnout this evening, and we hadn't counted on bringing them all to one and the same place. And then it was beer o'clock! And the pub fared well with our arrival. This trip had many things going wrong, but still, as far as I could see, everybody had a great time. That's how it should be! 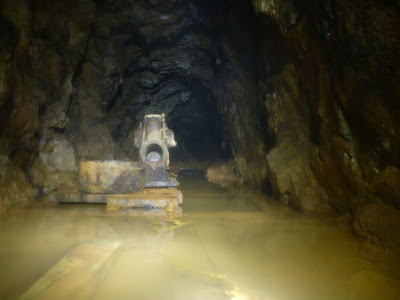 A delapidated pump in one of the side tunnels 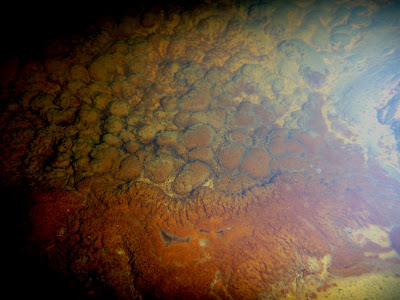 Behind the pump I found an undisturbed ochre floor. Pretty! 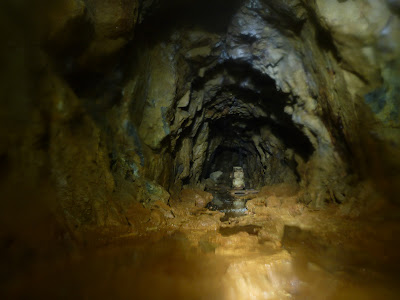 The pump seen from the other side
Posted by Margot at 16:39