It's autumn! The leaves have pretty colours and the weather is often bleak. Time for many mines to get flooded. We wanted to do a few of these early in the season, hoping they wouldn't yet be TOO flooded. And this was one of them.


Given this was the specific aim, I decided it was wetsuit time again. And I never regretted it! Ali lead this trip, and first scouted out an entrance that was flooded. Coming close you could see there were air pockets, but I figured it would go a bit far to try to go through there. So we went looking for the alternative entrance, of which it became apparent Rick had already found it. And then we went in. 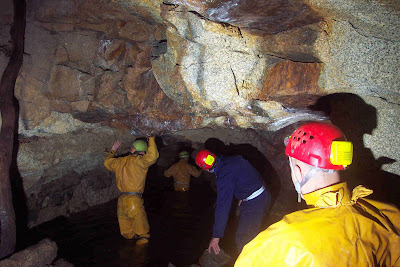 Going in! Pic by Dave 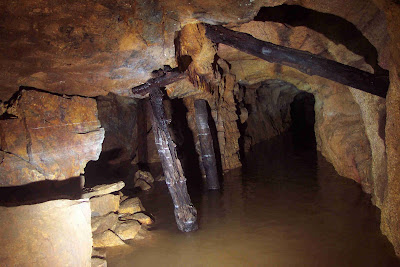 Pic by Dave
What a beautiful mine! Lots of stopes and winzes and whatnot, and most of it covered by between a foot and a fathom of crystal clear water. Excellent! The water meant you could go anywhere; I happily swam over several gaping holes in the floor. And this time the water was really water, and not some crap that looks like tomato soup, so I could admire all the structures. Swimming underground is the real deal! I've been lucky recently. Redmoor, the Tamar (not underground, but fresh, cold and dark, and thus nice, anyway) after Wheel Russell, and now this. I like! 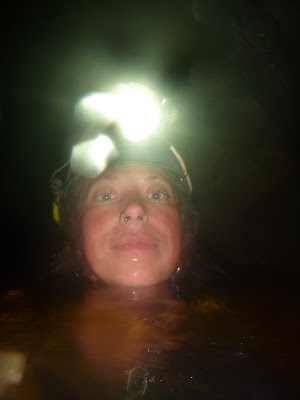 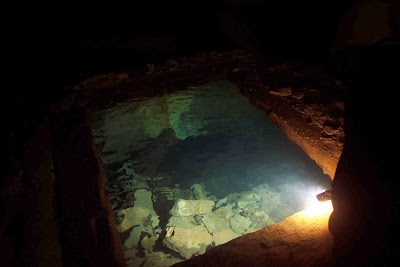 It allows one to just swim over structures like this! Pic by Dave.

In the end I went into a tunnel of which we assumed it came out at that entrance we first scouted out. The water didn't reach all the way up to the ceiling, but for comfort you need about 20 cm; the space between your mouth and the top of your helmet. If it's less you have to tilt your head all the way back, and then you can't see what you're doing, and it's freaking cold as well. So I dived two less-than-20cm-stretches, but then I decided to go back. I was alone there (the only one in a wetsuit), and if I would get myself into trouble it would immediately be big trouble. The others were tens of metres away in a tunnel you could only swim through, and so was the exit, and sticking your head in water of such temperature makes you really funny in the head really soon. I thought it was very wise of me to turn around! 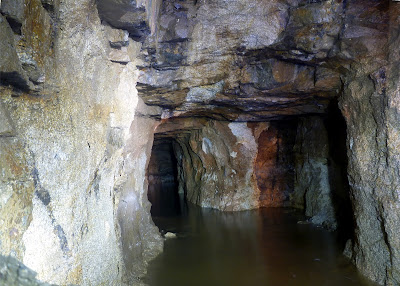 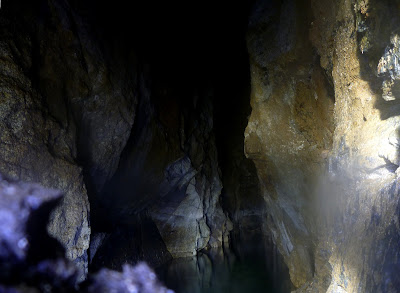 Ali wasn't impressed; he wanted me to come out on the other side, and was quite willing to shine a torch into the tunnel to guide the way, but as finding the way was the easy part, and I didn't see how light prevents you from drowning in cold water, I decided he could figure it out. Bring a wetsuit yourself if you want to know if one can get through! 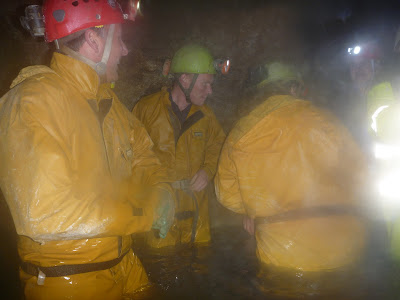 A remarkably large number of men in yellow that night!
By then we had seen it all, and we went back to the cars. Wrong! Dave and John were still in there, taking pictures, and we were going nowhere until they were back. I could have stayed! But well, what can one do. We waited for them, and then buggered off to the pub. And we had had an enormous turnout this day, so we almost filled it up. A good night!
Posted by Margot at 17:04