I might just have blogged about caving making you very welcoming towards cold, wet and muddy conditions, but a few days ago I got a message from the Cornish Mine Explorers: the Sunday trip was cancelled due to bad weather. What? Since when does anything stop these guys? Luckily we Devonians had another mine on our to do list: Ludcott mine. A few months ago we had found the shaft, and maybe this was a good moment to go in. Nobody had gone down there with permission for about 30 years! So five fast deciders gathered on a fresh Sunday morning, and were greeted by a sweaty man with a chainsaw in his hand. This executive gentleman lived right on top of the mine, and he wished us good luck.

I needed some that day; there is no path to this shaft, as nobody has any business there, and when I was struggling through the shrubs I managed to slap a branch of holly straight into my face. With force. Right into my eye! That hurt. While the men rigged I spent quite some time covering my teary eye with my hand and wondering how bad the damage was.

The whole idea of trying to find this mine had been Finbar's, who also was the one who knew the surface inhabitants, so when we had managed to rig this somewhat impractical shaft he had the honour of going first. I figured a sore eye is something to ignore, so I was second. And to my surprise, after Lionel there was no fourth! Dave and John decided to stay above ground. 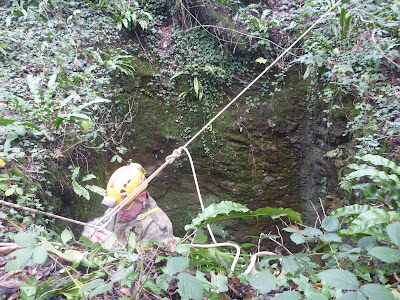 Finbar on his way down 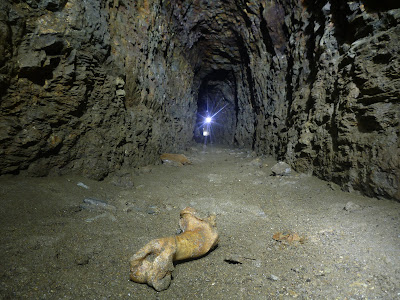 The sight that greets one just beyond the shaft
While Lionel was still coming down I had a quick look if the level that started at the bottom of the shaft went anywhere. I followed it to a T-junction and then came back. It looked promising! With the three of us we went on a proper exploration. Soon we had to conclude this mine is riddled with winzes, but most of them have at least some ridge on the side, and can be crossed. We also found another shaft; this one capped, and equipped with many remnants of mine engineering. I tried to take pictures of all that to show them to Dave, who had left his body and his mining knowledge at the surface. And amidst all that my eye did what I had hoped it would do: stop hurting. No serious damage then, luckily! 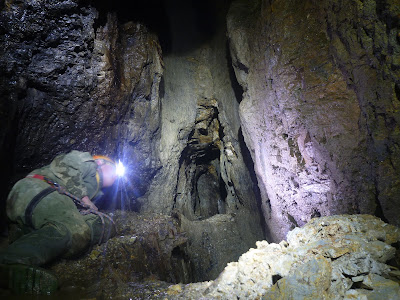 Finbar on a ledge beside the passable shaft 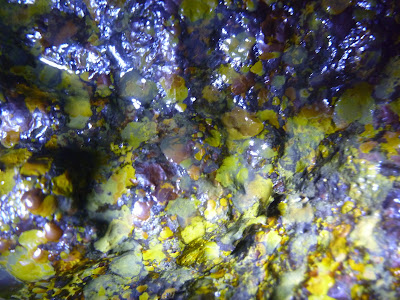 Beautiful staining on the wall 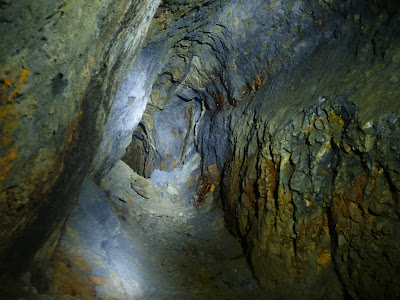 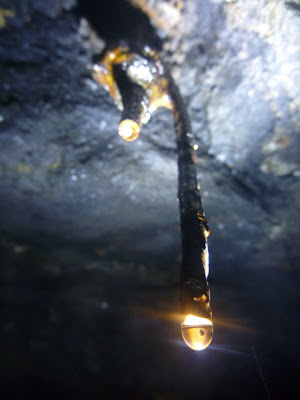 We climbed out, and unrigged the place. And reported back to Mike (who had laid his chainsaw aside). He and his wife even made us a cup of tea. Maybe next time Mike will come with us! This was mine exploration grande stylee, thanks to our overhead hosts! 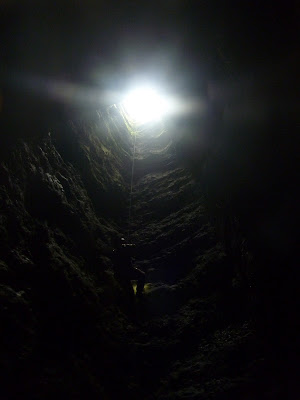 Lionel climbing back to daylight 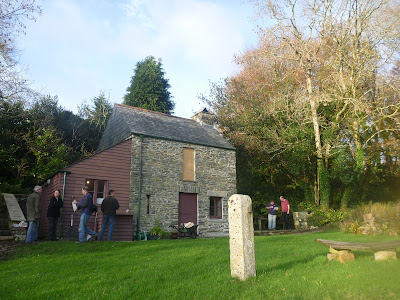 A post-underground cup of tea, and lots of discussion and exchange of documents with information about the mine. I hope to come back there soon!
Posted by Margot at 08:24