How can one tell if there is an underground emergency? It’s Dave phoning to say you should get over to his place. That was the first indication that the call-out practice of the DCRO is not perfect yet: I didn’t get the text message that we were expected to show up for a practice. We had to be there in an hour, and Dave had to gather his stuff, so the only way of car-sharing would be me driving to his place and then swapping to his car.
At the meeting place we bumped into Roger, the practice coordinator. He told us we didn’t have permission to go into the adits on the terrain, so this would have to be an above-ground search. And we need to train that too: if people are missing, and suspected to be underground, we’ll get called out, but there would of course not be guarantees that the victim indeed would be there. The Cornish guys had already spoken of more than one case where someone was suspected of having committed suicide by jumping into a mine shaft, but was found above ground. So we better get good at finding subaerial people as well.

Some people had come better prepared than me. I had only been enjoying my first cup of coffee when Dave phoned. But both Ferret and Rich had brought a whole flask of the stuff! Indispensible men they are. And after a long introduction on casualty care we split up in teams, and combed out the search area. My team contained the two paramedics, and they turned out to be keen mycologists as well. So we may not have found the victim, but we did find all sorts of mushrooms, including magic ones! 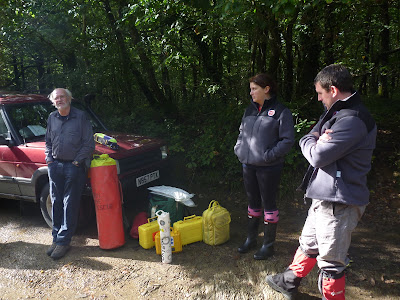 Roger giving us a briefing with the paramedics ready to talk us through the ins and outs of the medical equipment the DCRO has available
At some point the radio informed us some other team had found Roger, not only our coordinator but also our victim, and gave us the grid reference of where that was. He pretended to have had a heart attack. One needs to find some excuse for unwellness if one can’t use an abandoned mine to invoke such. So we stretchered him out of there. Heavier than the laminated A4 sheets that before had been our victims! But job done. Pint of beer deserved. And in spring they’ll do a proper cas-care course. Maybe I’ll join, and then I’ll get really good with non-plastic casualties... 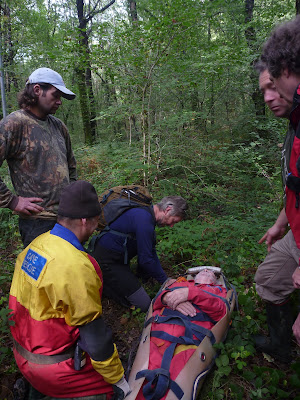 And Roger as victim
Posted by Margot at 22:05