“I didn’t know you ran!” “That’s because I didn’t!”
The desire to get some exercise seems to overcome more people. Last Friday I had lunch with Neil. A rare chance to catch up with a busy lawyer. And to my surprise he mentioned actually having time for running. Running? Neil running? That’s new. But then again, I came up with the reciprocal confession. And one thing leads to another: Neil would run around Burrator Reservoir on Sunday. Twice. And we decided I’d give it a go and join.
Underneath a scenic leaden sky a familiar car punctually pulled into the car park, and out came the newest version of Neil. Soon it would be evident the days were over that when a caving trip would include an uphill walk I would be mocking unfit lawyers. I doodled around while Neil did a warming up (I’m not good at such responsible things) and then we were off. And at what speed! 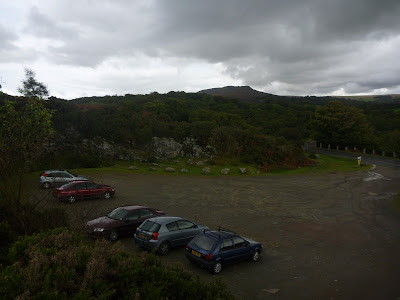 My faithful car on the parking lot where we started. Still with the Virtuous Lady roofrack on top!
The speed was one thing. Then the road was flooded. Suddenly I realised I had forgotten to bring dry socks. But what can one do. I just kept on running.

After a while it became clear Neil was more the impulsive than even type of runner. That mad speed of the beginning faded, but came back at unexpected moments. But I managed to keep up. At some point Neil asked what the longest distance was I had ever run. My mind raced back decades. I couldn’t think of anything further than Baarn-Hilversum, back in the days! And that’s 10 km. “This will be more” was the response. Blimey! Would I really outrun myself of half my present age? 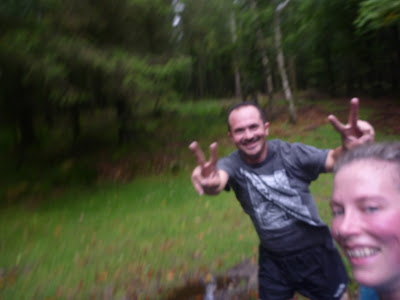 I'm not much of a photographer while running
This time I had brought my camera. I’m not going around an entire reservoir without a camera. And during several runs with Ferret I had regretted not bringing it. We tend to run in Plymouth, but sometimes you run underneath such amazing pink evening skies it screams for documentation. This time I’d be prepared! And I can’t keep my hand steady while running, but Neil can. 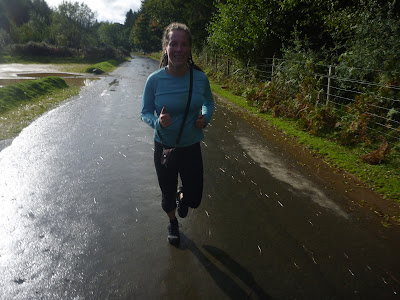 Before I knew it we left the road to struggle up a water-logged dirt track. Almost halfway! I sneaked a sip of water out of a bottle in the boot of my car and on we were again. I felt confident doing the next half. And on we went, again through the flooded bits, past all the dog-walkers, past Sheepstor, over the old mossy bridges, and what have you. 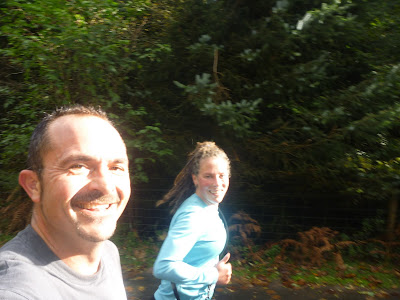 Again, before I knew it the dirt track popped up from behind a bend. Neil charged up like a bull. I was starting to feel the 135%  personal record, and followed at a saner pace. But I made it! I actually have outrun my 17-year old self. And that 17-year-old biked 30 km per day. Now I’m glad to make 3. 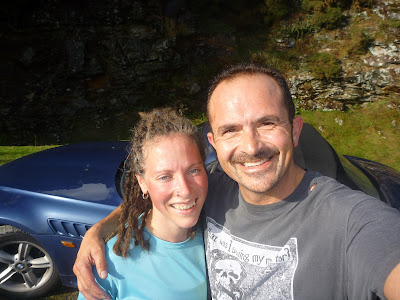 I personally think we look remarkably fresh for people who have just run ~13.5 km
We took a victory picture, and did some stretching and additional exercise (that is, Neil did), and did a cool down walk. Lastly, Neil did his Neil thing and enthusiastically pulled all sorts of things to show out of his car, even the CD he was looking for (he got me listening to Iggy Pop), and then we were off! And home I would realise how hungry this had made me. Dinner was followed by a proper after-dinner-dip until the first nutrients reached my blood stream. And the wet socks had resulted in a blister. But it was good! He does this every week. Who knows, I might join again next time... 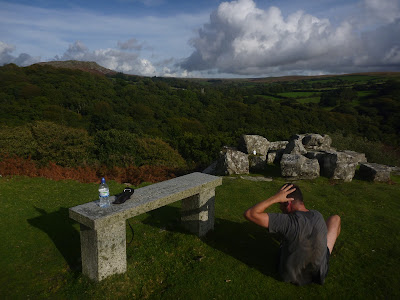