The first thing that happened after the Norway fieldwork was that Federico, one of our new lecturers, invited me over for an evening of gin and tonics. An excellent welcome!  And I figured by now the time had come to reciprocate. So I invited those who had been present there, being Federico, his wife Ella, and Jon, over for a night of emptying my drinks cupboard, which had been experiencing accommodation problems for a while.

Jon happens to be social velcro and rarely appears alone, so he had announced to bring his trusted companion John. And when I was telephonically flagging him in (none of my guests managed to find my house in one go; that’s what you get when you invite social scientists) there were three shapes staggering up my garden path. The third shape turned out to belong to a German collaborator of Jon’s, who had been paying a professional visit, and had another night to kill before flying back. Or flying somewhere random. This meant the food was not as plentiful as I had intended it to be, but the internationality of the company was. With a German Brit, a Luxemburg German, a Chinese American, a British Italian, a germanophone Brit, and me, it was a nicely varied bunch.
What I had been slightly afraid of indeed happened: all these people were either very polite, or very afraid there wouldn’t be enough alcohol, so while they were invited for making room in the drinks cupboard they brought in a bottle of Plymouth Gin, a bottle of grappa and a bottle of menta, and an unknown quantity of beer. As a tasting session it was quite a success!

The melee of the evening also allowed for all sorts of intercultural talk. And language discussions. I even learned some English! Though I might not want to repeat what I learned on the blog. But at some point Ella was yawning, and John was falling asleep in all sorts of uncomfortable poses, so it was time to do the British thing and call cabs to get all these people home. And I probably have to do this again! My drinks cupboard is overflowing. Next time I should only invite people who promise not to bring anything themselves... 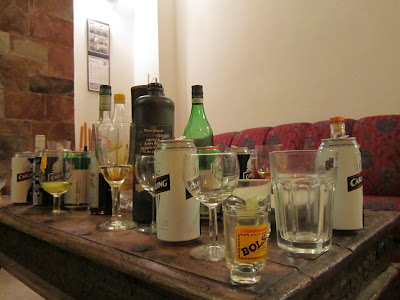