Time flies when you're having fun! Less than a year ago I took up caving. The third trip I went on was to Wheel Russell. We would go back there. So I had a look at my own blog to refresh my memory. And blimey, all these things that have changed!
When we went there last year I hardly knew more people by name than Dave and Neil. If I now look back at the pictures of that day I see faces that have become very familiar. But I also see that I was still crap at underground photography! And I'm still far, far from good now, but at least not as rubbish anymore as I was then.
My kit has also changed. And my approach to things. Back then I was aiming for staying dry. How I gave that up! It can hardly be wet enough for me now. So instead of donning waders I now zipped myself into a wetsuit. And then I found out I had forgotten how far away from the car park the entrance actually is! And whether you wear waders of a wetsuit; you get sweaty. But the good thing about a wetsuit is that you can flush the sweat out of it once you hit the water...
We struggled over hills and through undergrowth to the adit, and by the time we got there I was properly overheated. So I asked Rick, who lead the trip, if he minded if I already went into the half-flooded tunnel, while we were waiting for the last ones. He didn't. It was nice and cool in there, and that way I got to see Wheel Russell the way one rarely sees it: with clear water! It's about a foot of clear water, overlying about two feet of mud, until you stir it and it becomes three feet of tomato soup. The honour was mine!
The water level was lower than the previous time. Unfortunately! But the entrance chamber (the only lode in the mine) was still amazing, and I was still unable to make decent pictures there. I may have improved my photography skills but not my photography patience. Ah well. I remember! 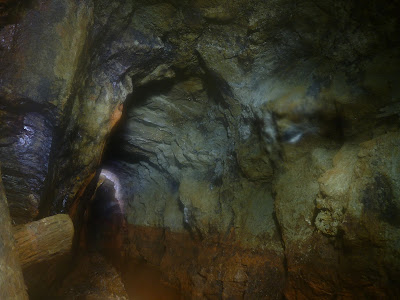 We went to the end, and this time I did go into the final tunnel before a collapse; it had deep water, and I could do with some more water cooling. Then we went back. I did manage to take a few 15 second exposure time pictures on the way! 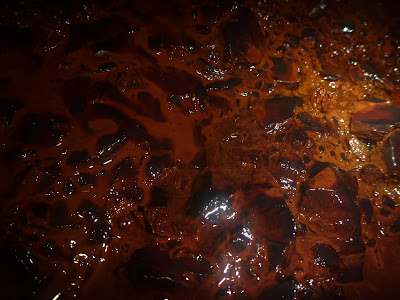 When I explained to my father and sister why caving is great I also mentioned the strange mineralogies, leading to strange colours and textures. Where do you find such pebbly floors above ground? 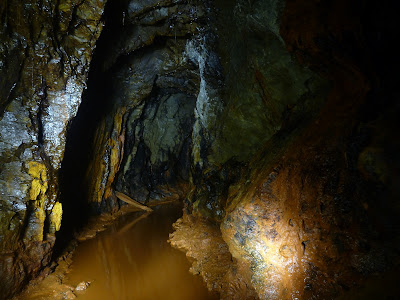 There is a side level behind an ochre dam somewhere along the way. I couldn't resist! But that meant I came out covered in mud up to my waist. So as soon as the path back to the cars went along the river I seized my chance. I jumped in! It was lovely. And in the mid-distance I saw some lights; it turned out to be Lionel and Jenny standing in a shallow part, cleaning up as well. I swam to them, and came out all refreshed. Splendid bonus! And I would go swimming again the next day, and I knew this way my wetsuit would never be dry by then, but well, there are worse things in life. 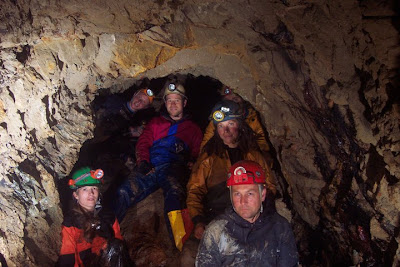 "Group" picture (we were at least twice as many as figure on the picture); pic by Dave 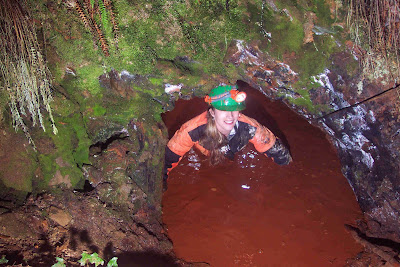 The gloop from which we emerged (pic by Dave)
We wanted to go to Chipshop, but the pub was reportedly closed! Another certainty in my English life down the drain. We redirected ourselves to the Queen's Head in Albaston, where we had a nice pint. And way too late I managed to drag Dave out of conversations with pensioner locals with all the time in the world. We had to get back to Plymstock, and from there I still had to bike to Plymouth! And the next day would be a proper working day. But it had been worth it. I like Wheel Russell! And I increased my sympathy for the Tamar as well. And it had been a brilliant illustration of the progress of time...
Posted by Margot at 08:54