How often do we look for things all over the world that we turn out to have in our back garden? I travel the length and bredth of southwest England (and some of Wales) to go underground, but I had never been underneath the very campus of Plymouth University. I had seen there's an entrance to the Students Union, and I figured it was some place that's used for more things, such as parties, but maybe because of being an arrogant member of staff I had never set foot there. But for odd reasons I had been running around on campus on Wednesday, and that very day there was a plant sale going on. Down there.
My office had never held plants as long as I had inhabited it, and my plants at home had all died while I was doing the Norway fieldwork. And this evidently was the time to do something about it! So I went down, and a whole new world opened in front of me. So that's where the students go and eat, relax, play pool, do whatever it is that students do! Quite a nice place. And not my place; I'm an arrogant member of staff! But now I was staff on a mission. A green mission. I bought three plants for in the office, and six for at home. Both look much nicer now! And there are no more fieldworks to finish them off. I hope they will last! 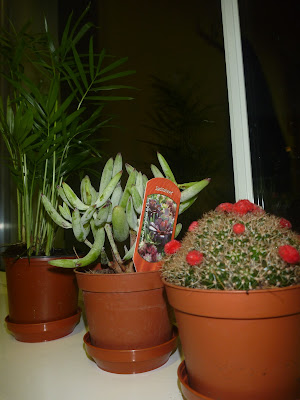 The window sill of my office, new style 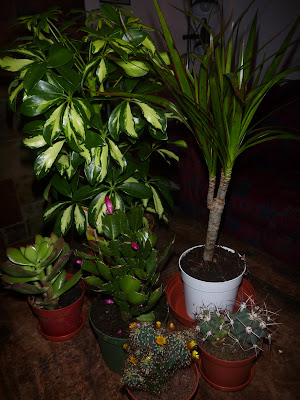 The harvest for at home