In May we had rescue training in Great Rock Mine, where we trained our searching skills. It's a mine with many entrances hidden in the forest, so it's more a hide-and-seek thing than a caving skill exercise. And I hope we're better at caving per se, as we failed to retrieve two of the (plastic) victims.

In June we trained with what's called the Heyphone; a sort of underground walkie-talkie. We hadn't tried that system before in an iron mine, and as the device uses the rock as an antenna that matters, so we should. 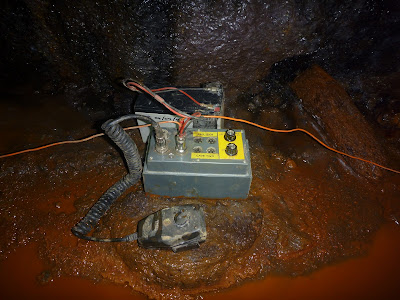 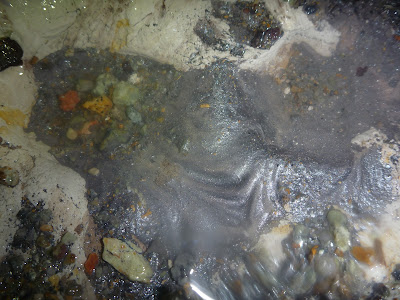 This picture of a puddle in a spoil heap illustrates the mineralogy: the white is kaolinite; weathering product of the granite that dominates in the area, and the silvery stuff is the micaceous iron ore. In the picture above it's evidently oxidised, but not here.
This gave us the opportunity to follow up on two trainings at the same time: go back to Great Rock mine, armed with Heyphones, and find the hapless two victims. While we were at it we also brought Little Dragons; hot-air rebreathers, which can be used to make hypothermic casualties feel a little less uncomfortable. 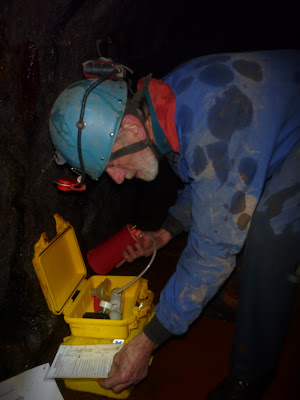 Mike assembling a little dragon
The little dragon worked! It's a neat invention. We did not manage to get the Heyphones to work, though. And by all indications that was not because of the ambient mineralogy. They are just old. There's a more modern, and hopefully better, system in development, and we hoped to already have gotten it, but it takes more time than expected. So to all those intent on getting lost in a cave: maybe wait a few months! 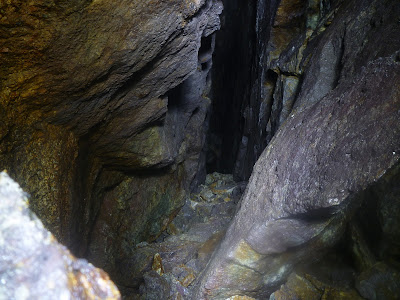 We were not allowed to look for victims beyond this point; the big slab on the right had recently come down, and one could see more of that on the verge of yielding.
Posted by Margot at 08:55