When I came to Plymouth, Roland lived in town. Within half a year he moved to a hamlet just outside town. And now he lives in Cornwall. That's a lot of moving house to do! And the first of these moves was the worst: they'd been living in that house for quite a while, and stuff tends to accumulate in such circumstance. Their big loft was full of dusty things. And it's a lot of work getting all that ready for the moving lorry. So Roland had called upon Rob and me. And he promised us a dinner in return. To be enjoyed at some later date. And we rocked that attic!

It turned out moving house was easier than organising that dinner. By the time Roland already moved out of the house just outside town I started to make him feel bad about still not having delivered. And it worked! So this Friday the dinner would finally take place. The night would be enlivened by the presence of Dorit; an Israeli lady who was in Plymouth on sabbatical, intending to work with Roland (at the time she organised that it evidently wasn't known yet he would be on Sabbatical too), and her husband Eli.

I was looking forward to it, and even a bit more than normal: Roland takes his sabbatical seriously nowadays, so I rarely get to see him. Good for science, bad for me!

I took the opportunity to go there on bicycle. It was a good ride! It was less than two hours, and the last miles were on small country roads (or even bumpy ex-roads full of pheasants), quite many of which I still remembered from walking there with Roland and Veit almost a year ago. I even got treated to a very pretty sunset. 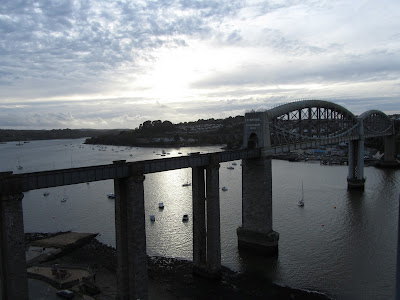 The road lead me over the Tamar Bridge. There's actually two: I took this picture from the new one, that holds the cars, cyclists and pedestrians, and what you see here is the old one, over which the trains go. 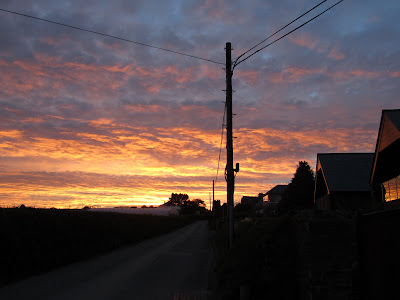 Sunset in Cornwall! When I took this picture I was already fairly close, so it wasn't entirely dark when I arrived...
While the darkness descended onto the land I reached the house. In good time to have a shower before the tidier guests would arrive! And the house looked much better than the previous time; then there were boxes as far as the eye could see. Now it was a house! Roland immediately dragged my bags into the house and claimed that "my room" was still a bit messy. They have a way of making you feel welcome!
Roland picked up Rob, Dorit and Eli from the railway station, and then we were complete! Now the night could really start. We had an excellent meal, as you do at this household, with excellent beverages. Rosa ran amok through the kitchen, and in between bonded with Dorit, who she seemed to adopt as an extra grandmother. Dorit and her husband also taught me a few words in Hebrew. Monday she'll make me do an exam!
It was a great evening, and these go fast, so before I knew it Roland had to bring the other guests back to the station. I would stay the night, and bike back the next day. So after one last glass we all went upstairs. And I slept like a princess. This gathering had been a long time coming, but well worth the wait!
Posted by Margot at 12:59