I biked the short way to Roland. I wanted to get out of the working day what I could get out. But on the way back I would have all the time in the world, so I would take the eastern, longer road. That means first getting to Gunnislake, then crossing the bridge back to Devon, and then to Tavistock, where the West Devon Way starts. That’s a lot of up and down, so it takes quite some time. And from Tavistock, where you leave the main roads, the route becomes not only prettier but also more elusive. 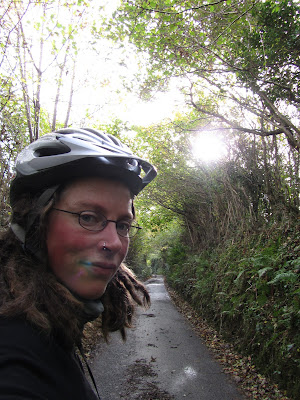 See! I was wearing a helmet. How un-Dutch, but very responsible, of me!
A moment of slacking attention meant I accidentally took route 27 instead of the West Devon Way. The map suggested it would stop somewhere, so I took some dodgy-looking route. It started after a bridge, which was so pretty I decided to sneak in a tea break. And it was fun! A winding road of appalling quality, snaking its way up the hill, then transforming into ribbons of muddy grass in a moors landscape. And by the time I reached Yelverton I was hungry, so I stopped for lunch. And a pint of cider! Belongs with English lunch, and it gives the inimitable feeling of alcohol in your leg muscles afterwards. Not that from there I still needed muscles: in Yelverton it’s done with the slopes up. There you hit the old railway which gently slopes down. 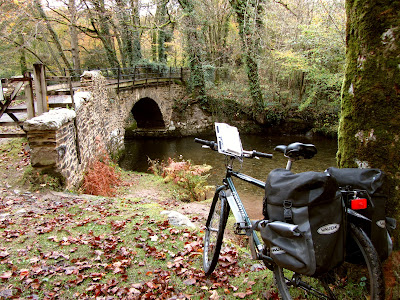 Good venue for a tea break! 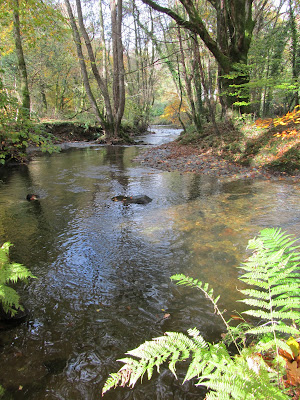 A beautiful autumn scene.
Somewhere along the way I came across an open mine entrance, and that was too much to resist. I wasn’t dressed to caving at all, but well, isn’t a bicycle lamp some kind of weak miner’s light? And is a bicycle helmet not some lightweight caving helmet? And well, I was going to have soaking shoes and socks, but there’s worse things in the world. So I parked my bike and sneaked in. Not wise, perhaps; nobody knew where I was, and I was alone and badly equipped. But I was glad I had done it: it was a cute little safe mine; not worth going there specifically for it. But if one is in the vicinity anyway it’s a lovely little bonus! 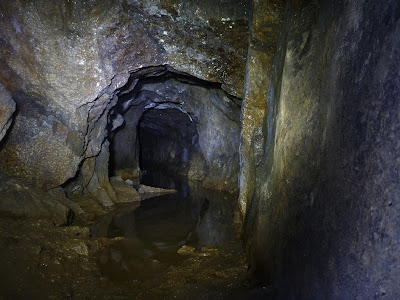 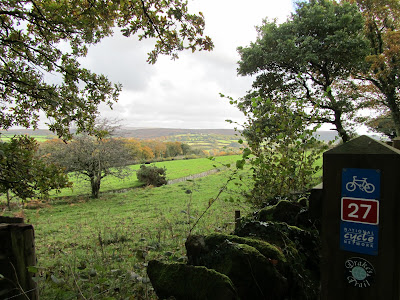 Near Clearbrook the path runs parallel with what I assume is Drake's Leat (the linear feature in the meadow). It was an old attamept by Drake to supply Plymouth with drinking water. Nowadays this comes from Burrator reservoir. Do notice as well the excellent signing!
With my dripping shoes I hit Plymouth, and one of the first buildings I came across was a DIY shop. I figured I may well just get me a pad saw. Why? It will all be revealed in due time! And then I went home. Altogether this trip had taken me at least twice as long as the way up, but this was a nice way of going about things! Not just a bike ride from A to B, but all sorts of weekend fun. Great!
Posted by Margot at 14:01