The days flew by! There were only two. Friday evening I was standing on the platform when the train from Bristol rolled in, and two very familiar shapes came out. Through the dark my father, my sister and I walked home, and for the first time I could welcome relatives in my abode! My father took a glance at my side table, and concluded rightly he was already there. They then both showered me with cheese and pepernoten! We had another beverage together (I had bought beer with a train on the label for my dad - that gets him drinking!), which was the first time in quite a while we could catch up, but then it was already bedtime.

The next day had a moderately good weather forecast, so that one was scheduled to be used for urban activities. While we had breakfast it was illustratively raining. Petra had done her research, and decided the sights of choice would be the Mayflower exhibition and the Marine Aquarium, but when we got out she decided that first we should get some fresh air, and explore a short stretch of the South West Coast Path first, and not just any stretch, but the one going east from Mountbatten. So that's what we did. Petra was so kind as to give me an excuse to add some more Margot-style bushwhacking; we came across an electricity line that seemed to go nowhere. I spotted a small track going in the same direction, upon which she said: go check, have fun, and we'll see you in Jennycliff cafe! And that is of course an offer I cannot refuse. Properly scratched and sweaty I could report over lunch... 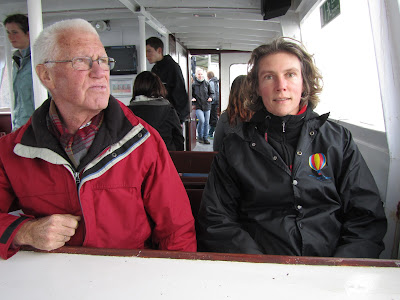 Wim and Petra in the Mountbatten water taxi
On the way back we visited the Mayflower exhibition. There's still a lot I don't know about the history of Plymouth and the rest of the world! And by then we had deserved a big cup of tea. After the tea it was still not beer time, so we had a stroll through the old town, past the gin distillery, past the Merchant's house, St. Andrew's church, Charles Cross, the university, my modest office, to very illustratively enjoy a pint in the JSV (the campus pub). And after that it was dinner time, and then bed time! As I said: the days flew by.
The next day was Dartmoor day. A good one for it! Excellent weather. Due to my colander memory we first had to stop by a supermarket for lunch, and the Tesco had cunningly disappeared to make me look foolish in the eyes of my family, but M&S came to my aid and sold us all we needed for the walk. I had picked a nice round walk on paths marked on the map, but after about ten minutes we had lost it. As we did know exactly where we were (three Sahers on the go: almost fail-proof!) we just decided to cut through to the path we would take on the way back. That was invisible as well! And I was the only one dressed to bushwhacking, so this expedition was a bit flawed. We came back onto the visible path with only the same ten minutes to go, and we extended that a bit with venturing in the direction of Burrator on another very visible path, but then we returned to the car. Back home! 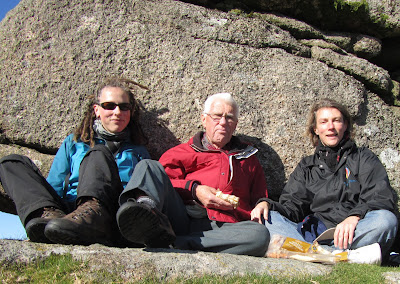 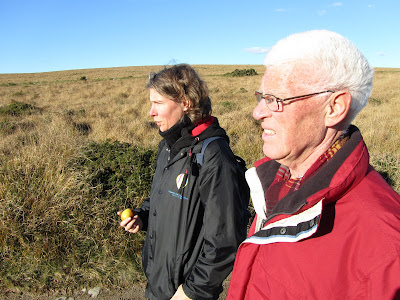 Petra and Wim admiring the view
We had a cup of tea and a beer, and went for dinner. On the way back we strolled around on the Hoe in order to scrutinise all memorials there in the dark, and then it was bed time. And the next day they would already leave with the 10.25 train! 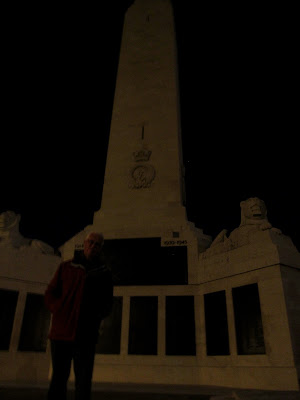 Wim in the dark at the naval war memorial
So what have we done? Not much more than strolling around a bit. But now we all are fully updated on the size of Petra's kids, on why caving is fantastic, on what Wim would have studied had the variety in academic education that exists now existed in the fifties, on how Petra's husband's political career is coming along, how her eldest son's football team has been performing over time, how it is different to immigrate into England compared to Norway, how rowing combines with pregnancy, and all sorts of other things. And that was the main point!
Posted by Margot at 19:54