Next time I'll wear a wetsuit! That's what I though the first time I went down Redmoor Mine. The water in there is very cold. And I ended up surveying with Ali, and that involves lots of standing still. At some point I was shivering uncontrollably. Time to get out.

So a wetsuit. Until I got an email from Lionel: "Will be coming, with waders this time"; waders! That's another thought. Staying dry. The parts of the mine I had seen the previous time had water comfortably below maximum wader level. But in the end I decided to go for maximum flexibility: a wetsuit, after all.

In the cold October night I changed into it. And no time later I was lowering myself into the inclined shaft. This time with less friction than the previous time, so I was down quickly. This was working out well! When a few of us were down we started exploring. It's a pretty mine. 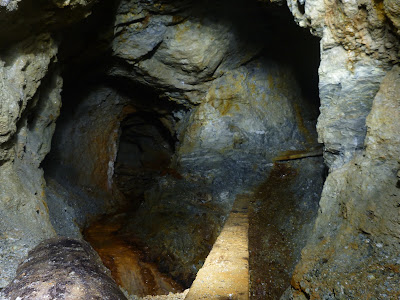 15 seconds exposure time can lead to confusing perspective effects... here a triple junction with a hole in the middle.
With Lionel I went all the way down one level until an inpassable collapse, taking pictures along the way. Then we went back to where we came from. Close to the inclined shaft there is a chute that connects two levels; we saw the lights of all the others, and knew they were in the other level. We walked around and followed. The previous time I had not gotten very far in this level, as I was really cold; now I had a blast in my wetsuit! But the water got deeper and deeper (strangely enough; this level was above the previous, less flooded one!), and Lionel, who had stuck to his prediction and had showed up in waders, could not go any further without filling these up entirely. Which would be most undesirable. When he decided to not go any further he was standing on tiptoe with the water only two inches below the edge of the waders... I am such a kind person, given that I did not give in to the temptation to give him a bit of a push! 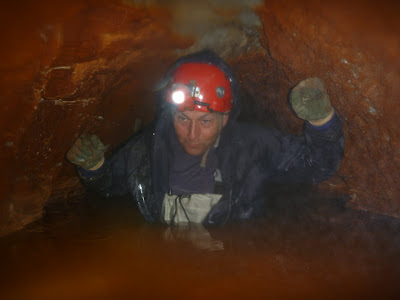 I went on, reaching a T-junction; I arbitrarily chose to go right, and after a while I had walked to a dead end. So I tried the left arm too, but that left me no choice but to swim. And the water got deeper and deeper while the ceiling got lower. And still no sign of the others! So there I was, swimming in a narrow space, on my own, in an orange dreamworld. It was magic! 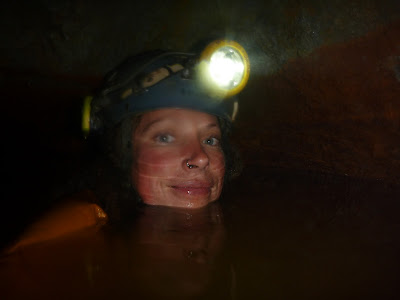 After a while the water table reached the ceiling. No others! They really weren't there. I resisted the temptation to see how far I could go, took some pictures, and went back to Lionel who turned out to be chivalrously waiting for me. He was as surprised at the absence of the others as I was. They must have taken a way back to the lower level just as we were walking around! But at the lower level we found them again. And unitedly we decided it was beer o'clock. 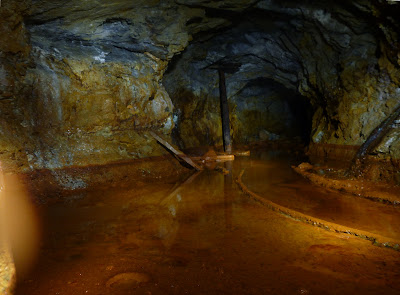 I took the fast road back to the inclined shaft. To my surprise I was the only one, and I heard the voices of the others from a distance when I reached the rope. I made a quick decision; I was in a wetsuit, so there was no urgency in getting me out and back in dry clothes again. Worse: I didn't have Dave's car keys, so I would be exposed to the wind while not having access to my clothes. But I knew I was one of the faster ones, and decided to just get back up before anyone else reached the rope. And off I was! 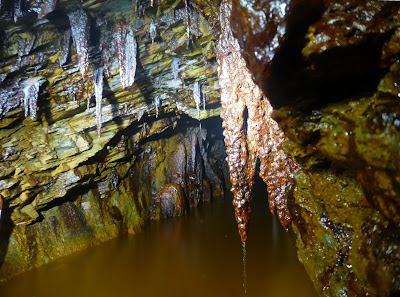 The lower level; it's a bit hard to take pictures of a tunnel if the only places where you can put your camera is on the side... but it gives some idea.

About three seconds later Lionel was up, then Rick, and then Finbar. Lionel was surprised to see two ropes attached to him; we only had one there, didn't we? Then we saw he had accidentally taken the end of the rope with him. Down there they were left without! Lionel thought it was hilarious, shouted "rope free!", imagined the surprise of the next in line at not finding any rope, and almost killed himself laughing. But then got his act together and brought the rope back down. 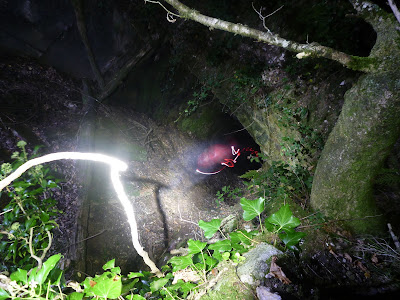 The inclined shaft, with Lionel, who is reduced to ghost status by the long exposure time, bringing the rope back down
By the time we were all out the pub was almost closed, but we did manage a pint and plans for the next three weeks. It had been a very good night!
Posted by Margot at 17:38