When I had just signed off with RSI, I saw posters at the nearby village hall. They were drawing attention to an initiative associated with the bicentenary of the village. The council wanted to celebrate this with a mural, and had proposed several designs. The population was encouraged to vote for them. The most popular one would be realised. I didn't vote, as the voting was online, and I did not want to switch my computer on.

I suppose the response might not have been positive. Nothing happened for a while, and then there were new posters with new designs. It was months later, and by then I felt comfortable voting. But I wasn't sure when anything would really happen.

A short while after the side wall of the local charity shop had been used as a canvas for displaying old and new pictures from the local high street, that same wall acquired scaffolding. And soon a mural started to appear! So it was happening! And the painter is making good progress.

I quite like this; if you now enter the village from the direction of the coast, one of the first things you see is this mural. And before the painting it was just a rather non-descript wall. It is already looking good! And it's not even finished yet… 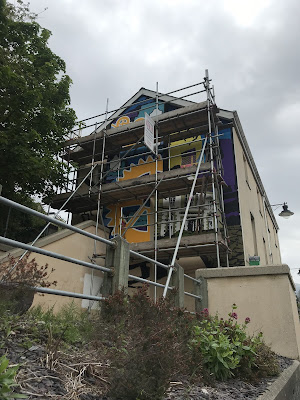