Last year, Bethesda was 200 years old! But it was not a good year for celebrations. This year actually isn't either, but one has to make do. So this year the village got some stuff organised. One of the initiatives is that they put out a call for pictures of the Bethesda High Street. If they were old pictures they wanted to recreate the modern versions. I didn't know what they were going to do with it, but that became clear!

Another thing that happened was a series of lectures. I assume that in normal times, they would probably have organised them in Neuadd Ogwen, but as it is 2021 they were done on zoom.

On Friday evening I made sure to be ready for the lecture on the development of Bethesda. There have been villages in this area since forever, but Bethesda as we know it now started with the road from London to Dublin (which is now known as the A5) being built. Slate quarrying was already happening in the area, so as soon as the road was there, someone built a chapel along it. That chapel was called Bethesda, after the pools where miraculous healings took place in Jerusalem, according to the Bible. The area had before been known as Glanogwen, but now it became Bethesda. And within no time there was a pub called "the Star", where the parking lot is now. And some 20 years later, my house was built.

The lecture spoke of the three estates that cover the area that is now greater Bethesda; Penrhyn, Coetmor and Cefnfaes. The speaker went into detail on the planning, and the division between the areas of the village that are on the various estates, and such things. He said that that legacy is still there, and he was pleading for somehow connecting them better nowadays. He suggested the site of the old Pant Dreiniog slate quarry, which is now mainly a field for walking your dog, could be used for that. And he was wary of increasing tourism, as he feared the village could turn into some sort of St Ives, where way too many of the houses are holiday lets. He also wanted more connections with Jamaica. In case that connection is not evident; the lords Penrhyn made their fortune with sugar plantations in Jamaica. I'm sure they added generously to their fortune with slate quarrying, but without the slave labour in the Caribbean they wouldn't have been able to buy up all the small slate quarries that they turned into one big one. And he figured we have the debt here!

After the lecture I went out onto the high street, as I had seen an announcement of the various pictures of the high street (and other areas) being projected on the gable end of the local charity shop. That was quite beautiful!

It is all a bit improvised. I suppose some mass gathering would have been nice, as local cohesion is important in this context. But maybe we can still do that once it is a good idea again! 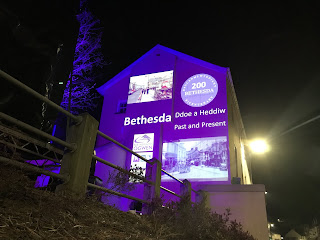 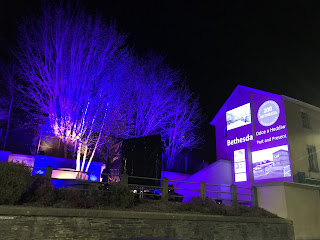