Anglophones might call them nurses! I was dragged to Pontio again, to see a play. It was a Welsh play, and our Welsh teacher had suggested we go see it instead of having one of our course nights. Most of the course agreed!

The play, Nyrsys, was a mixture of paying attention to the NHS's 70th birthday, and celebrating Welsh women. It was a Verbatim play, meaning that the maker had interviewed lots of nurses and assembled the whole play from the direct words of the interviewees. I had never seen a play like that before. It was also in a way a musical; there was much singing. 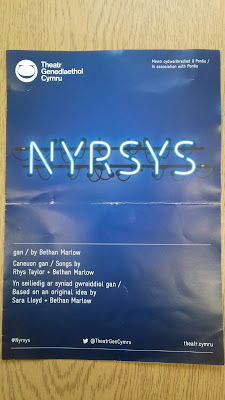 I was completely knackered after a trying day, but I was glad to just relax and think of other things for a bit. Upon walking into Pontio I immediately found the others from the class. And soon we went into the room where the pre-show talk for Welsh learners was held. The lady who had written the play was interviewed by one of the Welsh tutors. And questions from the audience were encouraged. It was quite nice!

When it was done there was some time left, so I went to have a drink with two of the men. Then we went into the actual room.

It went the usual way! I enjoyed it, but couldn't quite follow everything. That happened before with Brecshit, the Father, and the Huw Edwards talk. Oh well! It was important I enjoyed it. And I liked the verbatim aspect. It wasn't a play with a plot as such, but it gave a good idea of being a nurse in this day and age, and the fact that everything was a quote made it extra poignant. And even though it was heavy at times; a cancer ward is not a place where you can avoid tragedy, there was plenty of humour in it too.

The five characters were distillates from the countless people interviewed, but became credible characters. They spanned the ranks in the ward. And they were all passionate about nursing, and all regretted the relentless financial cuts that had lead to them not being able to provide the care needed. They all wanted to sometimes just be able to sit down with a patient and talk. At the end of the play, some announce they are leaving to work in the private sector. I can imagine! And that was the saddest; that the government gives so little priority to healthcare that patients suffer and dedicated staff get pushed out. I hope one day that stops being true!

We all enjoyed the show, but when it was done, and there was an after-show chat available too, we all decided it had been enough. We went home. And I already have my next Welsh language public event lined up! A discussion about the Welsh government's aim to have 1 million Welsh speakers by 2050...
Posted by Margot at 09:09