Office away from the office

Being in the School of Ocean Sciences has its advantages and disadvantages. One thing that could be either is that we are separate from the main campus. Our offices are on Anglesey, but we do the bulk of our teaching in Bangor. This involves a lot of moving to and fro. That can provide a welcome source of fresh air and exercise, but it can be a bit of a pain too. And you don't want to do it too often.

Sometimes, you have contact hours spread out over the day. It's not always worth going back to Menai Bridge in between! I used to either pop into the library for some work, or find an empty lecture room. That's not ideal, though; the library computers are sometimes all in use, and you can't really do marking in there as your own students may well be right behind you. And lecture rooms can be heavily occupied too, and some have rather awful facilities, with monitors that won't hang at face height, or which don't have a proper chair.

Since a while, we've had a hotdesk in one of the buildings on the central campus. That's brilliant! You have a proper computer in privacy, and a chair, and a building that contains a kitchen. I haven't had use of the kitchen yet; you need to borrow a fob for it, and that has to be signed off by your line manager. As if he doesn't have anything better to do! But one day I'll be able to make myself a cup of tea in there.

It's for all of us, but it only happened once that I found it occupied. By no fewer than two colleagues! But altogether it's a lovely invention. We can use our time more efficiently now! And the last time I was in it I had brought a radio. If I am doing things that don't need too much brainpower (faffing with spreadsheets, answering emails) I like to listen to some music or talking. It's still not as good as in the office (I like my double screen, for instance) but it's quite good! 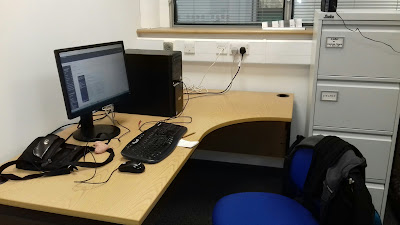