In Britain, it is allowed in many places to park on one side of the road, even if that means the road effectively becomes a one lane road. I suppose there is little choice; the cars are there, the old towns are not designed to hold so many, so there is no other space to put them than on the road. But it doesn't make for pleasant driving.

The two roads that lead to work both have parking on one side. The one is quite narrow so you really can't pass each other; the other one is funnel-shaped so on one side you can pass an oncoming car, but somewhere along the way you can't do that anymore. Depending on exactly where the cars are parked you have to make a call on where to pull in. Generally that works fine. You have to wait sometimes, but in general, it works out with the people technically having priority just periodically letting a blob of cars coming from the other side pass. Sometimes someone demands their priority when that is quite against the unwritten rules of the road (probably people who live elsewhere) and then some angry gesturing follows. Sometimes someone is not quite certain if there is enough space, which can lead to either unnecessary waiting or close calls. And sometimes it goes wrong.

I don't know if it had anything to do with me having had a bit of a hard few days behind me, but the day after I was told I had to re-do the unpleasant job of allocating dissertation titles to students, I misjudged the situation myself. I thought I could just squeeze between a passed car and an oncoming one. I couldn't! That was two wing mirrors damaged. Shit. I was already quite frayed but this didn't improve anything. If I want to be careless with my car that's my problem but now I had damaged someone else's.

The lady whose car it was was a bit upset, but luckily, she kept her cool. I apologised and admitted it was my fault. She just took my contact details. I suggested we sort this without insurance companies involved; I suspect both our premiums would go up if we would involve them. And she trusted me. I think! She did take my car registration so maybe she did want to be able to sort it out officially if I proved untrustworthy. I can't blame her.

I went to work and phoned the garage. Did they by any chance have a spare wing mirror lying around? I didn't expect so but one never knows. They said they wanted to see the car. I brought it in, and they agreed I needed a new mirror, but they didn't have one. They recommended two scrap yards that might. So I went back to the office. One of these was not open yet; the other one only scrapped cars, they didn't dismantle them to sell the bits on. My idea of a scrap yard has to be revised now! What do they do with them then?

I decided I didn't have time for this and phoned a shop selling new parts. Did they have a wing mirror? Not yet they said, but they would order one. Could I come pick it up at one? I could really do without that as I was still trying to get the bloody dissertation allocations done. But I also wanted to get this over with. So I said I would. I then locked myself in the office for a bit. I had to get my composure back! I was a bit shaken by it all. Luckily I have practiced so after a while I got me a coffee and cracked on with work.

After lunch I picked up the new mirror, and delivered car and mirror back to the garage. I have practiced replacing wing mirrors, but this wasn't the week for it. I hoped it would be done before I had a lecture in Bangor! I didn't get a phone call so I wasn't confident. But it was done! I have a lovely new mirror.

The next day the lady contacted me to say she had too, and told me how much it had been. I refunded her and that was it. That was a rather expensive split second but well, nobody was hurt! We both have working cars again. And I will now be more careful at these funny parking-on-the-street traffic situations! 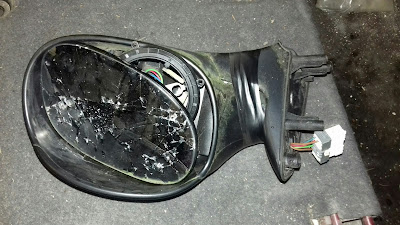