Which father, one may ask? Not mine, fortunately. (Mine’s turning 80 today though; happy birthday Wim!) I had seen announcements for a Welsh language play that would come to Pontio, and I thought I'd give it a go. It came with a discussion for Welsh learners beforehand. I booked myself a ticket on the front row for both occasions.

The day approached. It was a busy time (with a strike coming up and all) and I wasn't actually looking forward to it. What didn't help either was that I first got a batch of emails saying my original ticket wasn't valid and here were new ones, and then another batch saying they had reconsidered giving out front row seats and I was relegated to somewhere further back. I would have to get my even newer ticket on the day! What a faff. And then work was so hectic I decided to work through the discussion for learners. I wanted to go into the first strike day with a cleanish slate! I also realised I had left my glasses in my car, which was at the garage for a MOT. A front seat doesn't require any, but now I was probably quite at the back!

When I got to Pontio, got my ticket and sat down, I saw I wasn't that far back It would be alright! And soon my new Welsh-speaking colleague walked in and sat beside me. That wasn't her seat, but it was free, and this was nicer. Good! Let it all begin.

So what was the play all about? Well, the Father. A man with Alzheimer who doesn't realise he has it, and thinks everyone around him is losing the plot. It starts with his daughter storming in, being angry with him as he has been threatening to a nurse sent to help him. He doesn't remember a thing about being menacing. He does know he thinks she is a thief as his watch is missing. His daughter suggests he looks in the kitchen, and hey presto, of course that's where the watch is. But he still doesn't need any help!

The play goes on, with changes being made in his house, his daughter sometimes having a husband and sometimes not, sometimes moving to London and sometimes not, and he is quite confused. What the actual situation is we don't quite know either; we see most through his eyes.

The situation doe snot improve. He loses his grip on reality even more, and it turns out his daughter really does move to London. He is put in a home. It's heartbreaking. But you can see the daughter can't cope with it anymore.

I could see my colleague hurting beside me. Her father has Alzheimer! It was hard enough for me to watch, but for her it must have been a lot worse. We talked about it a bit, also with Dani from my Welsh class who was in the audience too. It was a sad play, it came at a busy time, but in the end I was glad I had come! It was beautifully done... 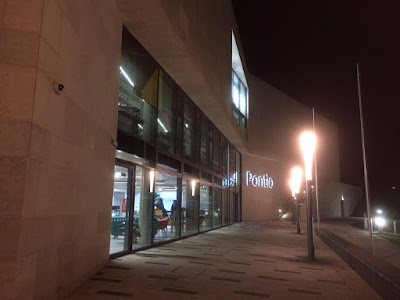