What is a Welsh speaker? It seems that the Welsh Government thinks it's a person who lives in Britain and who considers themselves a Welsh speaker. Or a similar minor of which the parents think they're a Welsh speaker. When you see a statistic about how many people speak Welsh, it is not unlikely to have come out of the census. Every 10 years the Brits do a census and one of the questions is about what languages one speaks. It leads to nicely clear numbers: you know exactly how many people have ticked the box that says 'Welsh' in response to the question what language(s) they speak. And you can easily track from census to census how that number changes. But what does a tick mean?

Fluent and native speakers will tick that box. People who don't speak a word of Welsh will not. But what about people in the middle? Do people tick it when they can have a conversation? Do they tick it when they know a few phrases? Do people not tick it until they're fully fluent? I don't think anybody fully knows.

The Welsh government wants to see 1 million Welsh speakers by 2050. But what does that mean? I don't think anybody fully knows that either. And is it even a worthy cause? An invitation to a panel discussion on the topic fell into my mailbox and together with Jenny I went. When we got there we teamed up with Dani from my (old) Welsh class, and a lady I dan't met before but heard of.

The discussion was chaired by a Welsh writer and journalist. When he started, he joked that he hoped the audience, which in all likelihood consisted of Welsh speakers, would still be alive in 2050. Then he introduced the panel: academics from three different Welsh universities, and one from an Irish university. So what did they all think? 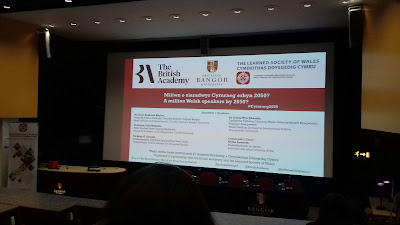 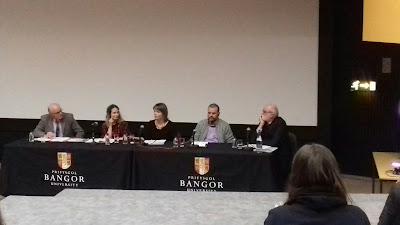 Some were optimistic and some pessimistic, but all of them were skeptical to a certain degree. Why this number of one million? Where is the money? What is actually done? And the most skeptical was the Irishman. He started by claiming that the Irish language was effectively dead. He said no young person used it as their main language, and thus the language would die out. The government had promoted education in Irish, but there was nowhere to use that skill. As he put it, they lead children up the stairs, but at the top of the stairs, there was no floor, so the kids all walked down the stairs again. And I know things are better in Wales but I know what he means! I put a lot of effort in learning Welsh, but at work I'm surrounded by English speakers, and I haven't had time to climb for a while, and climbing is my most Welsh hobby. If I speak Welsh in the local supermarket I tend to be answered in English. Where is that floor at the top of the stairs? The Irishman said research had pointed out that when a language is spoken by less than 70% of a community (and I assume, if there is an alternative available) that language goes into pretty much unstoppable decline. Just having spread-out Welsh speakers will not work; they have to clot together in >70% communities! But the risk is that if any money is spent, it goes to the communities with a lower percentage, and the viable communities are in peril.

I was wondering, though, if Jenny would not almost have caused a million Welsh speakers on her own. And now we need to clot together! Easier said than done, though, with a heavy academic job devouring one's time and energy. Oh well. We'll see how it goes, and I'll do my best within the limitations I work with! And I hope to still live here in 2050. If I do I sure will list myself as a Welsh speaker the next time the census comes along (in 2021). And probably in all ones that follow. We'll see! Let's hope the Welsh don't make the same mistakes the Irish have...
Posted by Margot at 09:26