Whatever happens, I should be allowed to stay in the country until December 2020. That's the end of the 'transition period' all EU citizens get. But I can apply for settled status. That process opens on March 30th, but there is a pilot scheme. It is a collaboration between the government and UK universities. I suppose the UK wants to keep the sort of people they like to keep; academics among these. So I was invited to register for the pilot scheme. Of course I jumped to the occasion! So I registered straight away. I was told I would get the actual invitation after some two or three weeks.

After a day or two I received the invitation. So now I should go and sort it! They only want a scan of my passport, and check whether I really live in the UK and not have committed too much crime. I should be OK! My National Insurance contribution seems to be enough evidence for me living here. And I am hardly a prolific criminal. I hope it all works out! Provided I get my hands on the required technology. The somewhat baffling fact is that you need a fairly recent android phone for it. I don't know what percentage of the population has that but I think it's a minority. Think alone of all the iPhone users! I have an android but, surprise surprise, it's too old.

Our Head of School had said he had tried to get phones for the school for the specific purpose; among the academic staff only, we have seven EU citizens (of 32), and at least 3 Brits married to EU citizens. The school would suffer a lot if EU citizens can't stay! Unfortunately, he hadn't succeeded.

I then tried to find out if the University had sorted something centrally. I figured it would; imagine how many EU citizens it employs in total! And indeed it had one (!) phone one could borrow. I seemed to have been the first; the app wasn't installed on it. I was a bit hesitant about putting it on; you need to log in on your Google account for doing that. I will have to make sure that login information will be removed afterwards! But I did it. 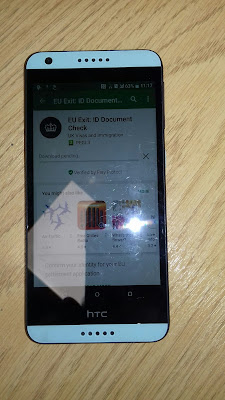 I got the app, but my passport was at home (oh dear). I made sure I Googled how to remove my login details from the phone, and did that. The phone was ready! But before I got to use it I already got a request to give it back asap. They will get that more often. One phone for the entire university!

I had a drop-in session at four, but I wasn't really needed so I decided to go home and use the phone. But that was harder than expected! The app scans the passport and your face, but it needs light for that. I have rather low light in most of my rooms! I should have done it in the bathroom; that has the brightest light in the house. I didn't think of that! And they don't let you have many attempts. I made do with the kitchen and the master living room. The passport was successfully scanned. I took a picture successfully, but some other scan wouldn't work. I will have to file additional information on the government website. I hope that's not too much hassle! Stay tuned...
Posted by Margot at 12:03