I had spent pretty much the entire Saturday in the hills. No chores got done! But I had plenty. I started on these on Sunday. By lunchtime I had done enough to grant myself a jolly! I made some sandwiches, packed a bag, and set off. My goal: a small lake I had seen from yr Aran. It was only a small walk!

It didn't start well. I got into a serious traffic jam (by North Welsh standards). When I came to a roundabout I had to take I saw why; the police had blocked everything except the first exit. I didn't want to take the first exit! But I didn't have a choice.

I saw some cars in front of me turning into a small road in front of me. I decided to follow them. I wasn't sure where it went but it was the right direction. I would recognise something soon enough! And so I did. I got back onto the road I had wanted to be on, and drove on. I got to Llanberis and there all went slow. It was a bank holiday weekend, and nice weather, and everyone wanted to be in Llanberis/Nant Peris. And Nant Gwynant. Especially people looking out for a parking space (forget it) or very, very insecure drivers who though 15 mph was a fine speed. Argh! I was glad to hit the tiny and quiet road into Nantmor, until I came across another car. Oh dear. I was fairly close to something that could function as a passing place, but I felt like I almost reduced my car to a total loss trying to get to it. These walls were so close on both sides!

I got to my intended parking space but by then I was ravenous. I sat on a convenient slate spoil heap and had my sandwiches. I needed those! It was 3PM by now...

Then I set off. The path was very soggy but quite easy to follow. The landscape was magical, as usual! And I had an amazing view on yr Aran (although it looks dull from this side) and Cwm Llan next to it.

At the lake I sat down on a rock and admired the scenery. I also got out the map; maybe I wanted to go somewhere again on Monday. I made a plan! Then I went back. I ate my fruit along the way. When I got back I had only walked some six kilometers, and climbed some 200m, but I had got my landscape kick. And seen a new lake! And even driven a new road. I drove back in the other direction so I had seen all of it; I had been tipped off it was very beautiful. And so it was! And still very narrow. I again met a car coming in the other direction. This time the other car backed up! And with some manipulation of wing mirrors we managed to pass each other. Brr! A beautiful road but not one to take lightly. But I had already seen another walk in the same valley I wanted to do. Note to self: not to do it in a bank holiday weekend! Especially not a sunny one... 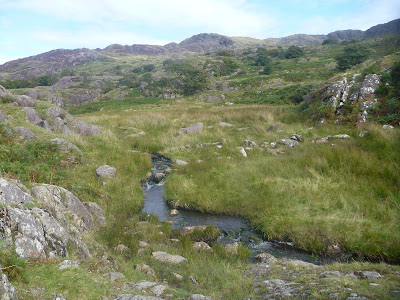 At the start of the walk 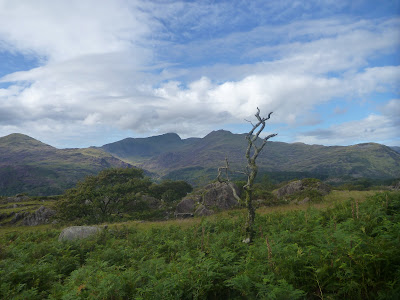 Snowdon in the distance (and yr Aran at the far left) 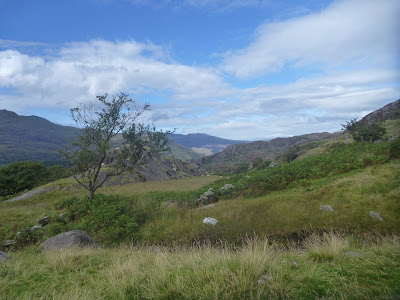 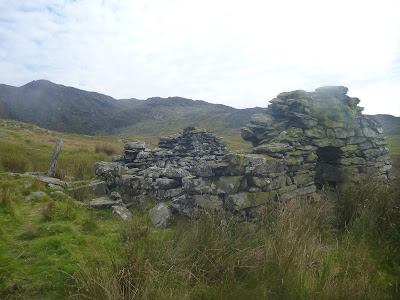 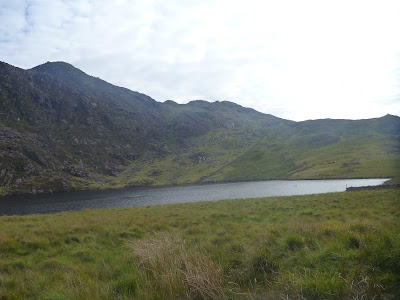 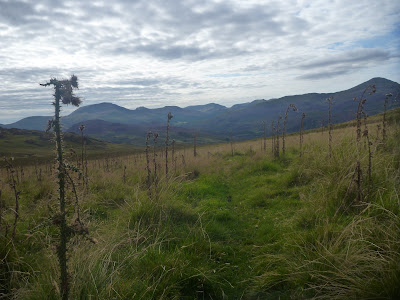 Thistles frame the view towards the west
Posted by Margot at 08:50