Wild goose chase for a tunnel

Thursday nights normally work like this: I go digging, and David sorts a trip out for the others. This week, though, both Miles and David were away and things descended into disarray. The previous week, the men had already made a plan for the week after. No emails about it were forthcoming, so on Wednesday I sent an email around to check if that plan still stood. Then the two men who had made it in the first place dropped out. Oh dear. Who was left? Soon it appeared it would only be Chris, Jason and me there. Maybe Edwyn.

I would pack my car on Wednesday, and go straight from work on Thursday, so I just packed everything. We decided to park at the site of the original plan and take things from there.

I got there and found Chris. We chatted until Jason appeared. Jason had mentioned he knew of some tunnel entrance not far away which he had never explored. It was really close to Dinorwic Quarry, so if we would find out it was a bit of a dud we could just go and explore the quarry. Which is lovely! For climbing too. So we had a plan. We decided to forget about the original plan; Chris would not want to do that physically and technically challenging place, and I knew a lot of the other men were keen on it too. It could wait! We sent a text message to Edwyn regarding our plans and set off.

We parked nearer to the incline Jason thought the tunnel was close to, and grabbed our stuff; form Chris, that was a helmet. Jason had little more. But I brought two hot flasks, some food, my tripod, my oversuit, knee pads, gloves, my hat and my boots. I didn't want to do the walk up in my wellies! It did mean the bag was huge and heavy; the boots alone are a kilo each. Oh well. Jason had said the entrance was a squeeze and squeezes are best done in protective clothing!

We set off. It was a lovely evening! And the area is very nice. Chris saw a kingfisher. We walked to the incline, past Vivian Quarry where I had not yet been. A nice detour! Then we walked up the first part of the incline. No tunnel! Then the next. Nothing. Now what? We might be on the wrong incline. We decided to keep walking up, and then walk over the top of Vivian Quarry and down the incline on the other side. So we slogged up, me with my silly bag. 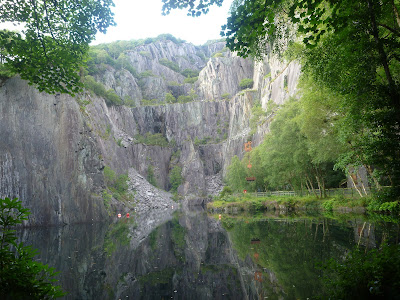 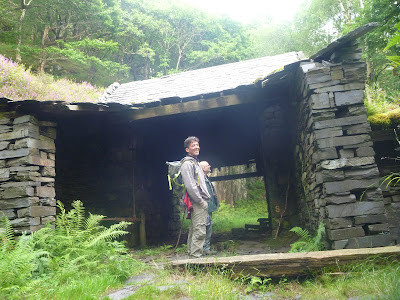 One of the drum houses on the first incline 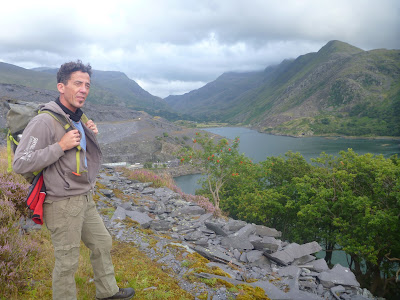 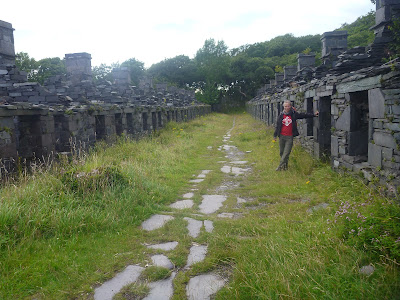 We got to the path leading to Bus Stop Quarry, and decided to go there, and then down again via the outdoor centre a bit further down the hill. We did. In the meantime we got a text message from Edwyn; he had showed up just after we had left the meeting point and had decided to turn back. Luckily he lives very close by. In the meantime, our route did not bring us to the other side of Vivian Quarry. We came all the way down the zig-zag path (which I have also tried to run, during two different races) and ended up where we had been before. Oh well, we could reach that other incline from below. I was starting to feel my feet, though! So when we got to the old quarry hospital I suggested we sat down at its picnic table and have a tea break. We did!

While we were sitting there, suddenly Jason muttered something and ran away. Soon he was back; he had found the tunnel! It wasn't on an incline at all. Oh well! Apart from my feet we were having a lovely night. We finished our tea and packed up. Chris took my bag. The men had already offered doing that at Bus Stop Quarry (which is officially known as Allt Ddu slate mine) but only now I thought it was a good idea. The tunnel started inside a little building with water tanks behind the hospital! Strange.

I changed. At least I hadn't lugged all that stuff up for nothing. Soon I saw Jason worm his way through the entrance. I followed! We walked in. And seconds later we saw the dead end. Well, that wasn't much of a surprise; if it would have been something spectacular we would have heard of it before. But now we knew! And we had had a nice night. 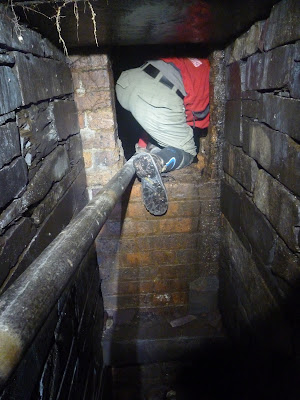 Jason negotiates the entrance to the tunnel 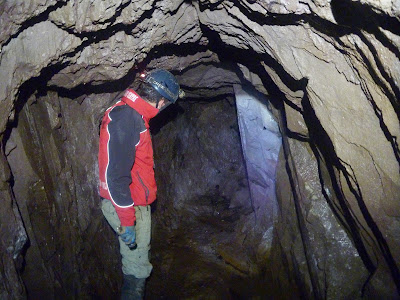 Looking at the dead end

We walked back. It still was a lovely night! We walked into a dead end at the slate museum, but otherwise we got back without issues.  And it wasn't very late! All good. 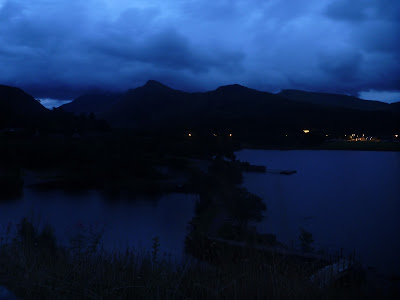 The next day I traced our route. The actual distance from the car park to the tunnel was less than a kilometer, and only some 50m up. We had actually walked 5 km and gone 265m up. Oh well! It had been a good night! 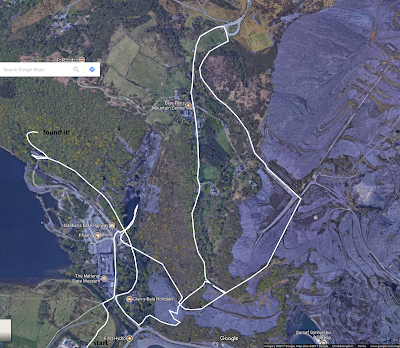