This spring I was contacted by an academic from Florida Gulf Coast University; he wanted to bring a group of students to North Wales on a field trip; could I help? And I could, to a certain extent. I mailed him information on the locations we use for our field trips. I couldn't attend in person, as they had planned that trip slap bang over our South Wales field trip. He had previously had contact with James, but he had left; he had after liaised with Suzie but she was off on maternity leave. So he ended up with me!

Then I got another request last week; this time from the Virginia Institute for Marine Science. One academic wanted to bring some students into Red Wharf Bay. He too had previously dealt with James. I told him James' shoes are hard to fill, but as he had booked his trip when I was around I was happy to give it a try!

Interesting to see that so many Americans come all the way to Wales for their field trips. They have a whole continent full of facinating geology themselves! But we have more science history, I suppose. Maybe that's what attracts them. Or maybe it's just James... 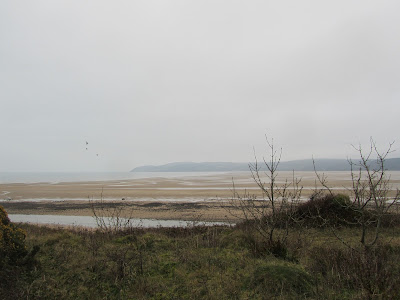 An early spring view of Red Wharf Bay
Posted by Margot at 15:20