There seems to be a pattern in my Thursday nights! It looks like Miles can go digging every second week, so every other week I join the Thursdaynighters. This week was one of those! And Simon had suggested going to Pen-y-Ffridd. That's not a very exciting mine, but it has a big fireplace. I thought a calm evening wouldn't be so bad. David was just back from the festival he had been at, so we were back to driving up together.

Simon, who had suggested the mine, had said he'd bring bacon and baps. David offered a frying pan and soft drinks. Jay promised cake. I thought I'd give it a Margot-ish twist and bring healthy stuff. If the others wouldn't eat them I would! So before coming to work I popped by the supermarket, where I bought plum tomatoes in two varieties, and strawberries, and plums. And some beer for at home.I had none left!

When we got ready at the parking lot I suggested perhaps bringing the beer. Almost all of us were driving, but you can legally have a pint in this country! I brought them. We walked up through dry weather. Soon we had a fire started! And I was hungry so I looked forward to some food. It was forthcoming! 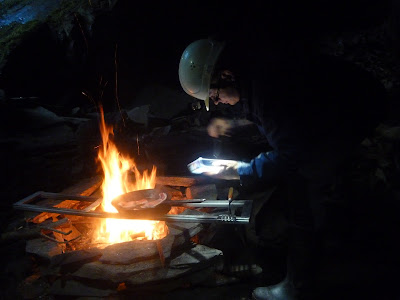 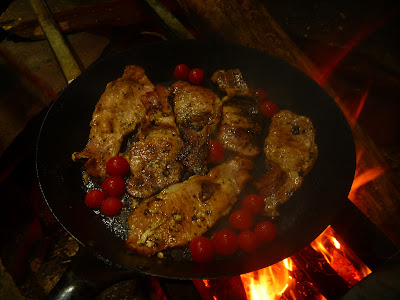 I liked the addition of the tomatoes! And the others did too. They were all eaten. I also had a beer. Simon and David shared another. It was good I had brought them!

When we had eaten all the bacon we could manage we went for a stroll. The mine is quite long. When we got to the end we heard it was raining rather hard, so we went back the same way and not around the outside. Then it was time to eat strawberries and cake! Don had brought a cake too. We didn't even manage to finish one. We had three! And we did manage the strawberries but not the plums. I'll manage with those.

By then Jay was getting impatient. He had to get up early the next day so he didn't want to linger. We packed up and checked the fire (or what was left of it) was safe to leave. We walked back, partly in the rain. Then we said our goodbyes! Would this be the last time we'd see Simon as a non-parent? Stay tuned!
Posted by Margot at 09:15