We would climb again at Bus Stop Quarry! I looked forward to that. I drove up and saw Simon already parked up. He was keen too! Then we saw Eifion approach. And rain. Oh dear!

Glyn and Eirian appeared too. Together we discussed the situation. I was up for giving it a go anyway; Bus Stop Quarry has plenty of easy routes that are doable when wet too. But that may be a bit of a mine explorer's opinion; climbers tend to REALLY not like rain. Especially on slate! On the sandpaperish rocks of Anglesey, like at Rhoscolyn or Holyhead Mountain, it matter less, but slate really does get slippery. Eifion suggested going to the Beacon climbing wall instead. I was in two minds! I decided against. I can climb indoors all winter.

Glyn said he wanted to look at some of the routes. I was glad to be outside, surrounded by slate, so I decided to join him. In the background we saw several cars leave. He had a look at some of the routes, and was clearly tempted to give it a go anyway. Some of these routes were rather sheltered! Soon we saw Eifion approach too. He brought the book! That helped. We had a look at some routes we could perhaps do, especially 'Fool's Gold'; a route Glyn had been psyched up to do. And while we did that the rain abated. We decided to have a few climbs!

Glyn decided to warm up on an easy route, one I had lead the previous time. He climbed it, and Eifion seconded it, and then it was time for something more serious. We chose 'Septuagenarian'; a 6a. Glyn lead it. It looked a bit tricky! But he did it without much effort.

I hadn't climbed yet so it was my turn now. It did start to rain again, but that didn't stop me. I was on top rope! Nothing too bad could happen. And the rain did make things a bit harder but I did it. Not bad, an outdoor 6a in the rain, on slate! Eifion wasn't keen on trying it too (even though the rain had stopped again) but Glyn talked him into it. And he managed! 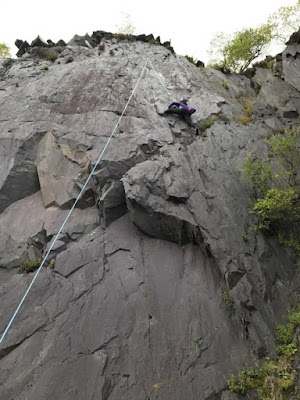 Me doing the splits on 'Septuagenarian'. Notice the long tights; I remembered the midges from last time! 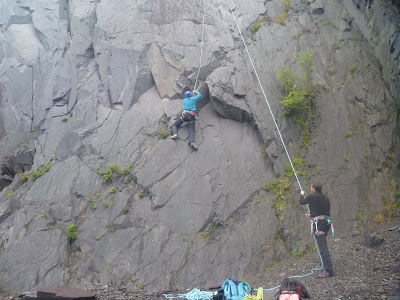 Eifion on Septuagenarian too

So now what? Fool's gold? That was a trad route. I figured Glyn had wanted to do this all evening and now he should. I suggested Eifion would do the belay; in trad climbing you can have big falls and Glyn is easily one and a half times my weight. Eifion is more his size! I did scamper up to the top to see what was there. The route came up a crack, to a ledge, and the final anchors were on the back wall of the ledge. A funny configuration; two anchors, but no maillons or bits of chain or anything like that; just a piece of rope. On well, it would hold! We do this underground too, sometimes. And the thing was; if Glyn made it to the ledge he didn't need these anchors; he could just walk off. 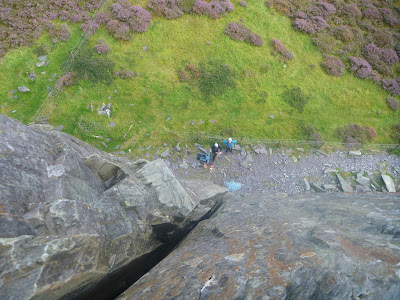 Looking at the men from the top of the route

He gave it a go. He used two ropes. He climbed effortlessly to the crux,where you had to transfer from an easy crack on the left to a difficult one on the right. Not easy! That right crack didn't have any footholds in the beginning. He was struggling. 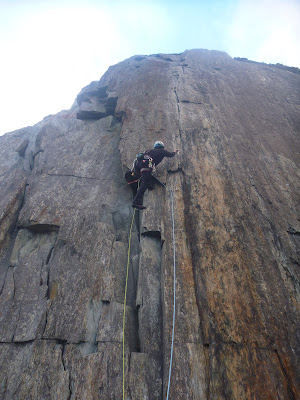 Glyn places gear at the crux of Fool's Gold

I thought he might want to try on top rope. Sometimes it helps to do that first before you lead it. He was in two minds (he doesn't like top-roping) but I ran, fetched another rope and some karabiners, scampered up and fixed the rope. When Glyn confirmed he was safe I chucked both ends down. Better for Eifion to belay from the bottom; I didn't have enough kit with me to do it from the top! The men sorted out the re-rigging and I looked on from the top. Not for long; Glyn had worn himself out on that crux, and his arms were too tired now. Oh well! Maybe next time.

Light was fading now. We packed up! I had only climbed one route, but I was glad I had stayed. It had been a nice route, it was cool see Glyn do his thing, and it was a lovely evening in a slate quarry! What more does one want?
Posted by Margot at 07:20