Paramedics get several years of education to prepare them for administering pre-hospital care. If you are in Mountain Rescue, you have to pretty much deliver the same kind of care (albeit with more limited means) in more trying circumstances. And typically, you only get one solid weekend of training for it. Eek! Luckily, the course I had done came with additional sessions later on. And after half a day at the Eisteddfod, and a few hours in the office, I reported at the Owgen Valley Mountain Rescue Base for an evening of additional training. In the time between the original course and this evening, I had acquired a printable copy of the book that forms the basis of the qualification, and managed to make my way through half of it. 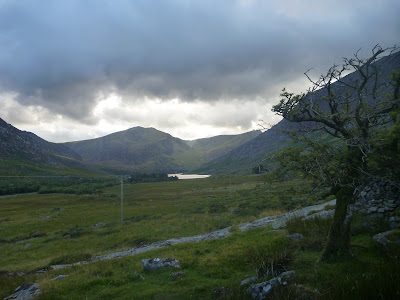 I was early and there was nobody there yet, so I started by admiring the view. Then a lady, Gill, appeared; she didn't have a key. Then more people appeared; Stefan, another person coming for training; Jamie, a qualified doctor (with his charming dog) who would help train us; and Chris, who wasn't involved in the training but who had a key. He was there not only for us; there was also a call-out. A man had a lower leg injury on a nearby hill.

We went in and Gill produced some tea and bara brith. Soon physicians Glynne (an orthopaedic surgeon) and Lisa (an anaesthetist) appeared. They spent quite some time pondering what we would do. In the meantime there was a lot of running around going on related to the call-out. There seemed to be a call-out as well of the Llanberis team; some climber had fallen out of a route. And there was a lot of reconnecting with Jamie; he had been a member of the Ogwen team for years, but had been away for years since too. He was back!

About half an hour after we got in we actually started. Gill, Stefan and me were taken upstairs by Lisa. Glynne had joined the call-out. And upstairs there was a very advanced dummy. Not your average CPR dummy; no, this dummy could also breathe, and had a pulse, and could scream and gargle and cough and wheeze and whatnot. In theory, that is. It seemed that operating it was no sinecure! Initially they only managed to give him asthma. And before he was willing to noticeably breathe his lungs had to be inflated with a pump. But stubborn insistence got Lisa and Jamie to get the dummy to do most things they wanted. Although there still were some blips; while I was taking the pulse of my patient the rate changed so strongly and abruptly I don't think a living patient would have managed that.

We all three did a scenario. Gill had someone with a serious allergic reaction to peanuts; Stephan had someone with a seizure and I had a person with a heart attack. That was OK! I think we all did fine. Of course we were flawed; it took us ages to find the adrenaline for the anaphylactic patient, Stefan missed a medical bracelet, and I forgot that the threshold for giving oxygen to a patient is not the same for a heart attack case as for most other cases. But I think we did alright! And there is another session coming up.

By then Glynne was back, and he helped me get a lot of my logbook almost filled. We need to have 28 items signed off before we can do the exam! We could have a serious session now, as I had nothing else planned that evening. And Glynne had to stay anyway until the next rescue party was back; there had been yet another call-out in the meantime. Something with someone lost in woods. So we worked steadily on; either with Glynne demonstrating things to me, or him interrogating me on theoretical knowledge and signing off when my answers were satisfactory. At the end I had eight more items ticked off. I'm at 27 now! Not bad.

By then everybody else seemed gone. Time to go! I had to first get one of the men to move the car of one of the chaps on call-out; he had blocked my car with his. But they are prepared for this (their parking lot encourages, if not necessitates, such parking) and these mountain rescuers tend to leave their car keys behind. Off I was! Homewards, where the other half of that book on casualty care was waiting...
Posted by Margot at 08:37