James had left in January. My office mate Juan followed a few months later. I went to the pub to say goodbye. My office mate Stella moved from our office to one that was closer to the lab. Then she moved to Paris, where her boyfriend lives, for writing her thesis. She was back a week later, though, for a meeting. I missed the official goodbye party as I was in the Netherlands, but I got a chance to say goodbye myself when she organised a small-scale get-together later on. It was in the house of friends, and we just ate, drank, reminisced and did some games. It was nice! I will miss her. And I hope Paris (and whatever comes after that) will be good to her.

Then my relatives arrived and I was out of touch for a week. On the day my sister left I got an email from Paul, the last office mate remaining, that he would soon leave and would have goodbye drinks that evening. Oh, OK! That was earlier than I expected. I went. It's a bit sad! They are a nice bunch and now I'm on my own. I have already heard rumours that the neighbour is eying up my office; it would be a bit silly to have such a big office for myself. It would also be silly to move if my contract runs out rather soon, but if other people make a reasonable claim on it I will go. I'm not afraid of ending in some broom cupboard; with the financial situation of the university (which might not be getting better), they can't possibly hire enough people to fill all the empty offices. I'll be fine! And I'm sure Paul will find his feet in the far south. This is science; people come and go. And generally, all turns out well... 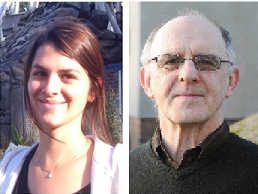 Stella and Paul, from their university profiles