When I had been digging the men had been having a look at a mine none of us knew much about: Bryn-y-Felin near Beddgelert. They found an interesting shaft that went places! But they didn't have enough rope and/or bolting kit to go all the way. So on Saturday suddenly one of the men started mailing around; should we go back on Sunday? And people had stuff to do so the trip was put on the late afternoon. That suited me; then I could go for a walk with Dani, sort out my pictures from the Saturday, and blog a bit before going underground.

We drove to the meeting point, and found Edwyn, the instigator, there. Phil and Jason appeared too. Lots! And the entrance was close to the road. Very nice! It was located in a scenic bit of woodland, with moss and whatnot, next to a field with handsome Welsh Blacks. 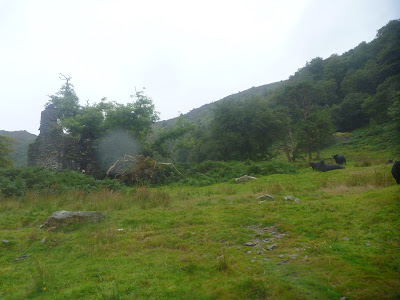 Field with farmhouse ruin and pretty cattle next to the mine 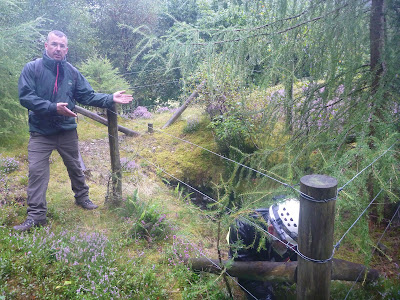 The entrance: a hole in the ground

We rigged the pitch and I was the first down. I waited at the bottom of the first pitch; there were three in total. It was just a level of a few meters long; not much to see there. I had a sandwich while I was at it! Soon we were all down, and I could go down the second pitch. That lead to a similarly small stretch of new ground (new for me, anyway). 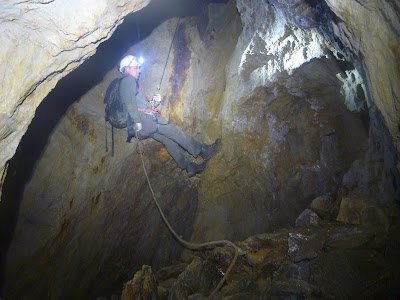 When we were all down the second pitch I could pop down to the lowest level, which none of us had visited before. Exciting! There was a main, central adit; it had water in it, which looked about crotch-deep. That was one to leave until the end! I explored all the other levels. Nothing went far, everything was backfilled! Edwyn performed some marvellous antics involving lassooing in order to explore some passage high up. That didn't go far either. Time to explore the wet bit!

I stepped in and Jason followed. He tends to be up for that sort of stuff! We waded on, and the water did not get more than waist deep. And the end had collapsed. It was stoped out there! Interesting. 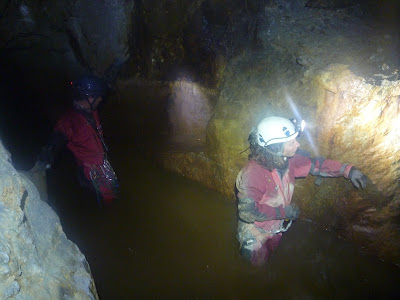 Getting ready to wade 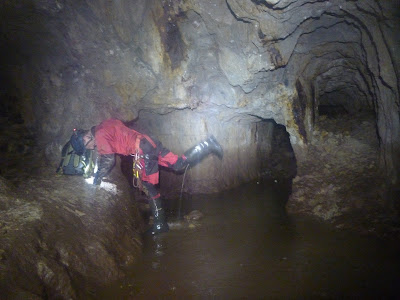 We went back. The first was already making his way up and out. This wasn't a big place! But that's OK. We all got out, and by the time I got back to the surface (I was last up) some others were exploring some other parts of the mine. A bit further on was a gunnis. A big deep one! Interesting! The men had a good look at it, decided today wasn't the day for it, and figured it would make a nice Thursday night trip. One I would probably miss, given my one week on - one week off schedule. Oh well! I'll hear the stories. 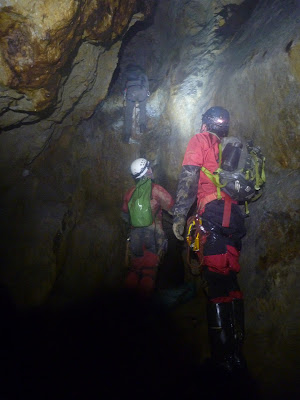 Starting our way back up 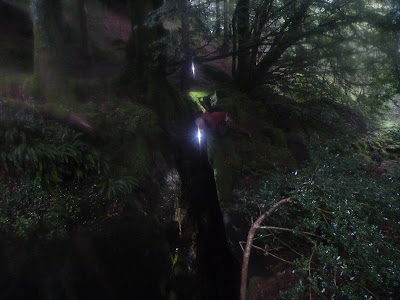 Staring down the gunnis in fading daylight
Posted by Margot at 08:25