Along the ceiling in the dig

We were digging again! I was keen. That route along the ceiling was very enticing. But I knew I should limit the amount of time I would spend in the space below the ceiling; Miles could not follow me there, and if anything would go wrong I would have a problem. So I anticipated me carefully exploring along, while Miles would have the drill and make the access route wider.

We started out like that. I started out having a better look at the situation; the previous time I had not had much time to explore. The route onward looked difficult but not impossible. I also had a look at a possible route sideways for in case the route onward would not work. I found one that was not passable yet but could be easily made to be. Good! We already had a plan B. 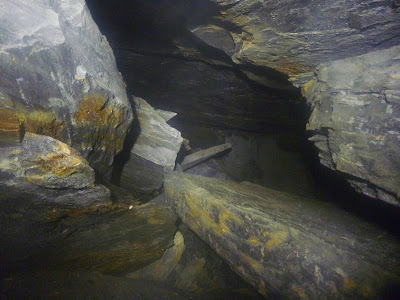 I went back to see how Miles got on. Not very well! He had already exhausted the drill battery. And he had only brought one. The previous session we had drilled our derrieres off without exhausting even one! He must have drilled hard. And he had started rather low. The bottlenecks were higher up! But that's how he works. Start at the beginning and work your way to the end. I am more for working on the worst bit until it's not the worst anymore. Then I move on to what's the worst then! But we are all different.

As the cordless drill was empty I suggested we go get the other drill; the one powered by the generator. Miles thought it was a good idea and went to get it. I seized the opportunity to chuck some big rocks down, knowing he was well out of the way! Then I took a few pics. As Miles could not get here yet, pictures would be the best thing I had for showing him what the situation was. I also went on to clear a pile of big rocks that were in the way at the far end. They weren't easy as they were very big and heavy, and on a slope towards me. One had to proceed carefully! But I did. It went rather well!

After a while I heard the drill again. Miles was back! With the drill! Good. I came down again to have a look. He was almost ready to charge the shot holes! I should be on the correct side of that. It took a while to connect it all up; Miles had used every last charge.

We had some food and drink while we waited for the resin to dry. Then we tried to blast. It didn't work! It turned out that the detonation wire was damaged; probably because of the big rocks I had thrown down. From where I had been I had not been able to see where they landed. We fixed it and tried again. Success!

We had a small look. Miles had blasted a big hole! We had a lot of tidying up to do the next time. But then we noticed a big slab of the ceiling had almost come off. Oh dear! That really had to come down altogether. Without us underneath it. We had to leave it for now. Hopefully it will have come down on its own accord next time we get down there! If not, we have to sort that out first...
Posted by Margot at 08:33