Taking Americans to the beach

There were Americans in town; they sought James to take them to Red Wharf Bay. They got Colin and me. They asked me first; when you have Colin, you don't need me anymore. But once they knew Colin was coming they did not retract their request.

The Americans would be in the lab in my building during the day. I popped in to make sure I would at least recognise the people I would be liaising with in the afternoon. They were a nice bunch! Only four students, with three members of staff. A nice staff-student ratio.

In the afternoon we set off; they had rented a people carrier that could contain all of us.

We got to the beach and pretty much did the usual excursion with them. Colin and I took turns giving a bit of a spiel at interesting locations. And we got up close to the carboniferous limestone rock! With our own students, we did not do that anymore; we take many tens of students onto the beach, and the path to the cliff has eroded away. One has to clamber a bit to get to it now. But with only four students (and five staff!) this can be done. 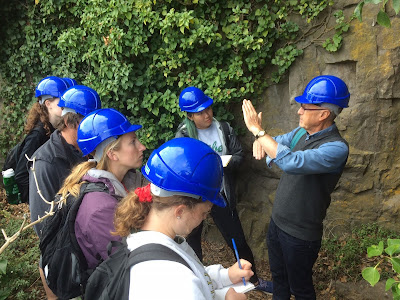 Colin gesturing at the Carboniferous limestone

We shared the talking, but when Colin talked I learned. He's been in science since before my parents ever met; he is a treasure trove of knowledge. I will actually not do the Red Wharf Bay excursion we do with our students again either, but learning things is always useful!

That was the excursion! By now it was pub time. Part of the deal was that the Americans would take us out for dinner afterwards! And the Ship Inn looked lovely; I was glad to visit it. And having a nice meal with nice people is always nice. I won't be here anymore next time the Americans visit but it was nice to have done this with them once! 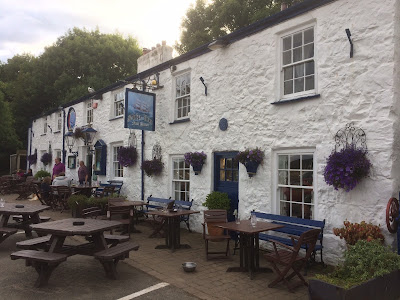