Finish the Thursday on Sunday

We left several holes in the ground unexplored on the Thursday. Then on Friday we got an email from Phil, who was venting his disappointment with barely ever managing to come to a Thursday night mine exploration mission or a Monday night climb, with a mention that only Sundays seemed to work for him, leisure-wise. That prompted an email correspondence suggesting finishing the Thursday mine that Sunday. The good news is: we did it. The bad news is: after that one email we heard nothing of Phil. He didn't show up.

David and I were a bit early. Soon Don appeared too. Where was Edwyn, who had started this all off? We got into our kit. Then we started walking. We figured he'd know where we'd gone. But then we heard a car stop; it was Edwyn! We told him where we went and left him to change.

We headed to the house we had admired the previous time. This time we went the other way around. Soon David had found a hole. Not one we had seen on Thursday! But it was very wet; not much air space. And none of us had brought a wetsuit. We moved on.

The next hole up was another new one. To us, that is. This was dryer, but it ended with a small stope which led further down. I followed it; it ended in an adit in which the water got rapidly deeper. I think I know where that one gets to the surface! 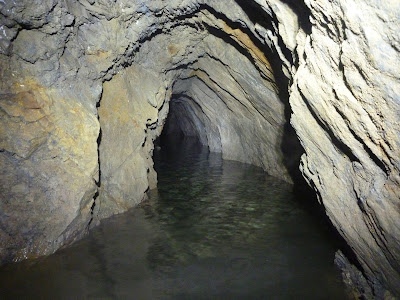 Up the hill we went. We found yet another hole. This went too, but not too far. When we came out Edwyn reappeared. He had found our three holes higher up the hill! Time to go there. We went up; the first hole (which I had missed on Thursday) went into a small stope. The next hole came into the same stope. The third hole came into that same stope but a bit further on; this went a few meters. The fourth hole went a few meters. Not much of interest going on!

We went back to the "main entrance"; last time a rope hadn't been long enough and we hadn't been able to get all the way down. Now we went back, with more rope. This was a bit of an anticlimax again; it turned out David had already been there some other time and it didn't go very far. But well, now I've been there too. Time to get up and out! I thought I'd be effective and went up while Edwyn was doing some scampering and David and Don were coming up from below. I sat at the top of the pitch eating an apple when suddenly I heard heavy footsteps behind me. Then some heavy breathing. What? But then I recognised the breathing (don't ask me how). It was Edwyn! And then I remembered a hanging level behind me. He must have found then connection to the level below...

We all came out, had a sandwich and then went back to the cars. Mine exploration isn't always exciting. But at least it was a sociable outing!
Posted by Margot at 12:31