I already blogged last year our new building was in use. It was not quite finished, but surely finished-ish. And it's even more finished-ish now. So much so it is scheduled to be officially opened next month. It seems to be a big secret who will perform the ceremony, but well, that it is secret indicates it's an important person. And there are more signs of that: suddenly all sorts of old structures around the new one are made to look spic and span. A crumbly wall has been tidied up again, a fence is being painted, and, which is a much bigger job: they painted the old, adjacent, and even connected building! It has a new wing but a lot of this building is from 1965. A lot of dirt has had time to settle on its inelegant, pebble-dashed exterior. Clearly, it was so dirty the imminent VIP could not be confronted with it!

Big, noisy cherry-pickers appeared, and men in them turned the grey building bright again. It involved not only the noise of the machines, but also the covering the windows with plastic, which flapped in the wind, and did not allow us to open the windows on hot days. We also couldn't look out. The worst was the smell, though. After a few hours in the paint smell I started to get a bit of a headache! I'm not sure if that was due to the paint fumes or to what I expect to get from paint fumes, but either way, I'm glad last Friday the men were done on that side of the building, and removed the plastic. Freedom! And it looks quite nice now! These ribbon-cutters come with nice side effects sometimes... 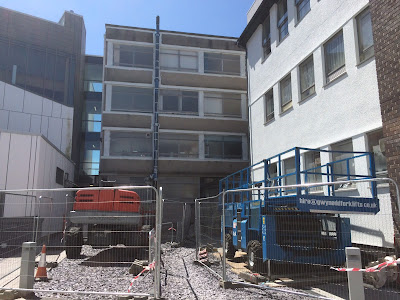 Stage 1: the wing on the right has received one coat of paint, and the wing straight ahead now has white bits around the windows 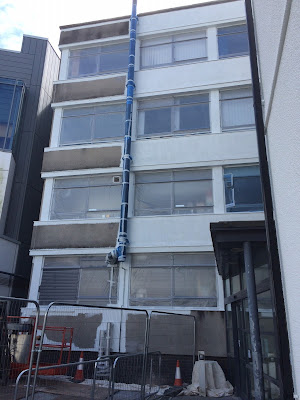 Progress: part of the wing straight ahead now has paint on all of the walls
Posted by Margot at 09:11