Death of an appliance

When I left home my father did the same. Or rather, when my father left home I had to do the same thing. He had sold the house I had grown up in, and he was moving in with his then girlfriend (now wife). So where would I go? I vcould choose between going with him, or moving in with my mother. I chose the latter. It would probably not be for a long time; the only thing I still had to do in secondary school were my final exams. University was waiting on the horizon.

When my father and I both set off in opposite directions we both moved into fully equipped households. We didn't have to bring much! But my father wished to later move, girlfriend and all, into a bigger house, and I anticipated a place of my own, so all the stuff from the old house went into storage. Me and my sisters were encouraged to run through all the stuff and place a sticker on anything we wanted. In practice, that meant only my eldest sister and me; the middle one was abroad and not in the position to go stickering. It worked well for me; I stickered furniture, lamps, crockery, cutlery, pots & pans, household appliances, and whatnot; as soon as I found myself a room in Amsterdam I had everything shipped and voila; a place of my own. Perfect!

A lot of that stuff still serves me now, 23 years later. I still have my old desk + chair, my old cupboard, a standing lamp, and most of the contents of my kitchen. And I still have our old vacuum cleaner. But that will soon end.

Some time ago I was hoovering, when suddenly the machine started to make strange sounds. It then proceeded to emit a trail of smoke, accompanied by an awful smell. That wasn't good! I immediately unplugged the thing, and dragged it outside. I tried to open it to get to the problem, but it was somewhere you couldn't reach without unscrewing things. I just left it there to sort itself out. Some day I'll bring it to the recycling centre.

I think this machine is from the early eighties. My guess is it's almost 35 years old. It's done its term! I won't try to fix it or have it fixed. I just bought a new, more energy-efficient, and smaller and lighter specimen. It sucks bigtime, as they say! It also smells less bad (this is a reference to its default smell; not the one-off smell of burnt plastic), which is nice. But still, I think the old one served me well! And I still delight in all I still have which I took from home. I think the lamp and the old mixer are now the senior electrical items. May they last long! 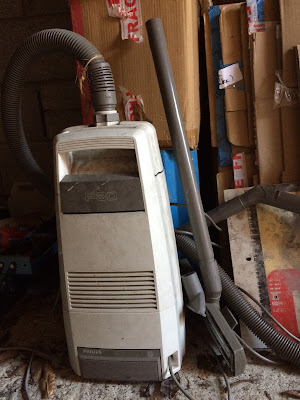 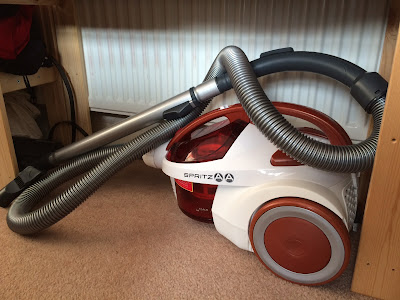 Its successor
Posted by Margot at 19:11