A fair amount of Cwmorthin, the mine we spent more time in than in any other, is submerged. At the time it was pumped but, of course, no more. Nobody gets to see the submerged bit, unless they dive. And we have a submersible, but the captain of it has never got it back to working order after our trials one and a half years ago. But Miles, the man who runs Go Below, had hatched the plan to siphon a normally flooded level out. And we'd go and see if we could explore it now. But he had warned us he could not promise we could, so he had also mentioned he would give us a go on his free-fall machine if the water wasn't low enough. The free-fall machine! The thing that scares and fascinates me! I have been quite interested in the idea of overruling my instincts with my determination. Jumping off something high is probably the most basic version of that. And I really don't like it. I was never a fan of the high diving board. I was reminded that I don't like such stuff when I had to do survival at sea training. I sometimes struggle with auto-belay machines in climbing walls. This machine, which is a lot worse than both, would really put me to the test. Of course I could go sky-diving or bungee-jumping, but the first is a bit elaborate and the second involves bouncing a few times, and I think that would turn my stomach. This would be my chance!

We gathered, and walked up to the entrance. Miles let us in and we walked briskly to where he had placed his siphon. The water was still rather high! I had brought a wetsuit, so I could explore in water too, but there did not seem to be very much head space, and that's not very nice. Edwyn had already put his wetsuit on in the car park, so he volunteered to get the siphon and move it to a deeper part of the level it was in. I volunteered for standing in the water, posing for pictures. 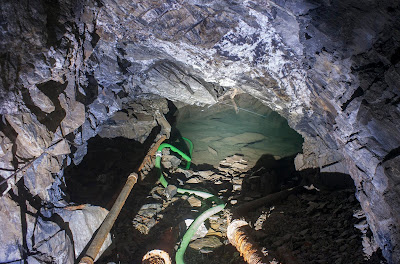 The siphon in the level 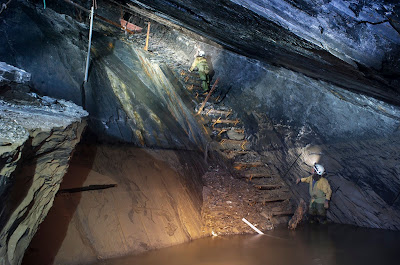 Edwyn also crawled into a rat hole as we was wet anyway, but then we gave up. We would have to come back after the siphon would have sucked the level empty down to the lower level, and then try again. And with that decision made we split up. The free-fall enthusiasts went with Miles, and the rest went towards the Lost World. I wasn't sure I'd dare! But I was keen to find out. Soon we came to a cute hobbit door which protected the free-fall machine from all too inquisitive mine explorers. I put on my harness!

Miles asked who wanted to go first. I heard no other voices so I volunteered. I clipped in and stood on the edge, letting the ~16m drop sink in. The adrenaline was rushing! And jumping off when the bungee is slack is rather counter-intuitive indeed. I had to gather myself a bit. And I felt it was a momentous occasion so I didn't want to just jump off like that.

After a while of hesitation I stared straight ahead and stepped off. The free-fall bit was very short! And the machine caught me, and lowered me gently. Once you had stepped off all was well! Better than in Blackpool. I first thought I'd go straight back up (walking around), but I figured I'd then miss the view of the next person (a guest called Dave) coming down. I stayed to watch!

Dave couldn't do it; he hesitated a bit and then decided against. Then Llion had a try; I thought he'd just hurl himself off. He didn't! He hesitated and hesitated and then unclipped as well. Blimey! In the meantime Edwyn had appeared out of nowhere and asked if he could have a go too. Of course he could! In no time he was up there. In the meantime Llion had had a cigarette and that gave him courage. He jumped!

Then it was Edwyn's turn. He clipped in, checked the karabiner, and just jumped off. Of course! Nobody else would jump, so we walked around to retrieve our bags and walk towards the entrance. At the top of the incline Miles said goodbye; he was heading home, but he wouldn't leave before he would be certain we had a key too, so we could get out. Very considerate of him! But we had a key (David had it) so all would be well. And while we sorted that a lot of the others appeared. They figured Miles would go out, with our guest Neil, and with Edwyn who was cold, and en masse they decided to go with them, to sit outside in the fresh air. Only our other guest Dave and I headed in the opposite direction, to the others in the Lost World. He had never been!

When we got to the pitch we saw the lights of the others. They had only just arrived! We joined them and went to the dig. Dave was impressed. We scraped around a bit but it was getting late, so we soon went back up. I had to help our local Scouser Brian on the traverse, but otherwise we came out without problems. And soon we were outside!

This had been a lovely, three-pronged night. A siphon, the free-fall machine, and the dig! What more could one want? We intended to come back either the next day or the day after, but for now we were very satisfied. Even the walk back to the cars was beautiful, in the last remnants of dusk. And we had something to look forward to!
Posted by Margot at 08:24