When I had been away somewhere, the men had explored some mine they didn't know much about. David had found a shaft going up with a ladder in it; he had climbed the ladder, installed two bolts, hung himself from one and hoisted up the ladder to anchor it on the other (I think; there were two bolts so I hope that's what he did) but by then he had got cold and left things as they were, and gone back down again. They had also seen holes in the ground higher up, of which one may connect to that shaft. We would go back to finish the job! I was keen; it sounded like my kind of mine, with water and rope work and daftness.

It was a warm night so I dressed up in zip-off trousers and a T-shirt; the rest of the kit (caving suit, wetsuit, SRT kit, etc) went into the bag and onto my back. It was a beautiful place! We first dropped the bags at the bottom and had a look at the holes we thought might connect to David's shaft. They looked promising! But we all went in the hole the others had been in before. I first explored to the right; it went a fair way. Upon coming back I bumped into the others. I continued to find David; he was indeed pendant in mid-air with his ladder. He wanted to know if anyone would go out and shout down into the holes, hoping to establish a voice connection. I went back to find the others; they all volunteered to go out and do some shouting. I went back to David. 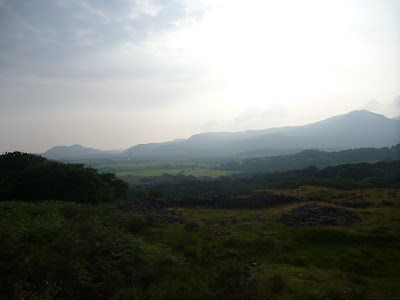 It was a sultry evening 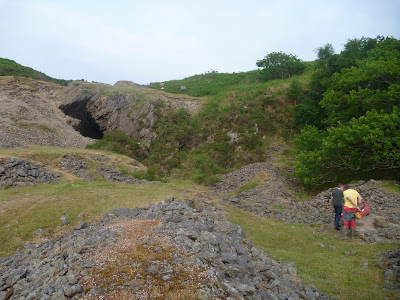 Simon and David at the entrance 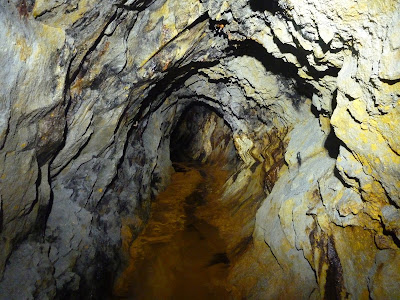 One of the levels 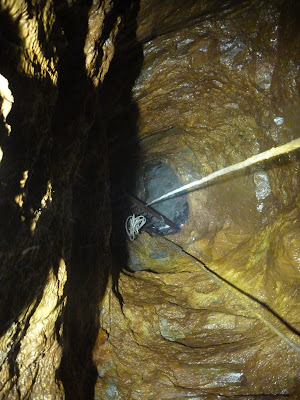 The shaft seen from below; the red thing (barely visible) is David on his high perch

David was a bit uncomfortable. I got a bit worried when he struggled with the ladder, and decided to forget about it and just free-climb up. Oh dear! Not without risk. But he did it. He found out the shaft was blocked, so he just lowered first the ladder and then himself. Mission aborted! Oh well.

He left a rope in place so I had a small look. Indeed, blocked! We went out.

We saw the others frantically trying to fight off the midges. It was that kind of night! We legged it back to the car and changed. It was fairly early so we went to the pub. Maybe we should stay properly underground on evenings like this. No scampering around trying to find connections back to the surface! A pity these sultry evenings come with such big disadvantages...
Posted by Margot at 09:41