On Thursday we had tried to explore a recently drained level, but it wasn't quite drained. Someone had suggested coming back the next night, but I thought that was a bit soon. I didn't initiate anything myself, and neither did anybody else, so that evening was spent in the lab. When I got home, though, I got a message; Edwyn was mailing around, trying to get people interested in a 7AM trip the next morning. That is 7AM in Tanygrisiau; it's a hour's drive. I went for it! And so did Phil. I gathered my kit and went to bed.

I got up at 5:15, had breakfast, and drove off. I was a few minutes early. I had had a message while driving; now I saw it was from Edwyn. He would share a car with Phil, but he hadn't materialised, and now Edwyn would be late! I had coffee and a newspaper with me, so I was happy to wait.

Edwyn phoned to say he was nearby, alone. Oh dear! What about Phil? But we kitted up and walked up, this time both with a wetsuit in our bags. It was a warm day! We scampered quickly to the siphon. I fell over along the way; I had forgot my orthopaedic soles, so I was uncomfortable in my too big and too shapeless shoes. But we got there. The water was indeed very low! We waded in, but it got deeper and deeper and I decided to put my wetsuit on. Edwyn decided the same.

In Neoprene we tried again, taking pictures along the way. It got deep and cold! But it was nice to walk where nobody had walked for a very long time. At some point the water got so deep our cameras, tripods and all, did not reach above the water anymore. We left them behind. But we got to the bottom of the incline where I had been swimming with David a long time before; we could get out there, so we fetched our stuff. We left it at the incline and explored ahead. There were some more chambers; one was the smallest I'd seen in this mine. We reached the end and went back. Edwyn decided to risk taking his non-waterpoof camera to the second last chamber, as it was photogenic and at the edge, the water wasn't to deep. By the time we were done photographing we were quite cold and keen to get out. We went back to the incline, got out, walked around to the siphon, collected the clothes we had left there, and walked out. It was only 10AM, but we already had a trip in our bags! 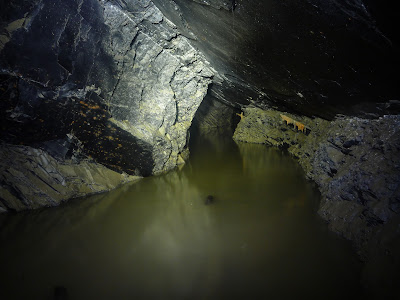 Nobody had seen this in probably over a hundred years! 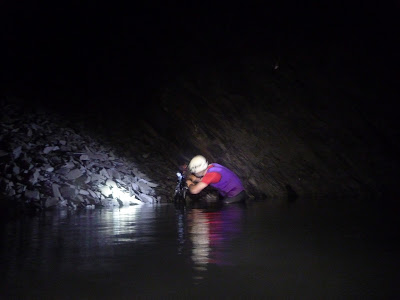 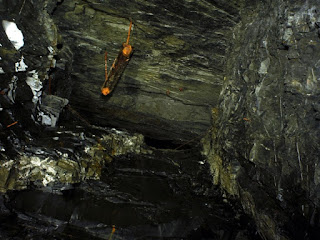 The picture he tookin the picture above. Pic by Edwyn 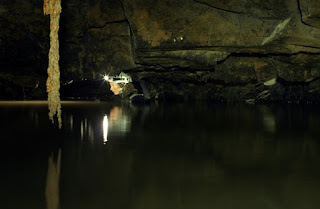 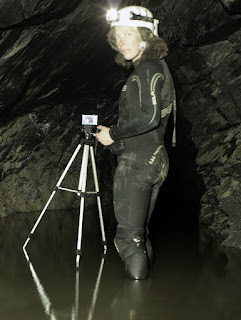 At the parking lot we found a Go Below group; its leader was interested in what we had seen. Maybe he'd have a look too! But we changed into dry clothes, and relocated to the Lakeside Cafe for a cup of tea and something to eat. Neither of us had a message from Phil by now. Disconcerting!

After the tea we each went our way. I wanted to have a walk in the surroundings; I had driven all this way anyway, and it only was 11AM. But after my walk I still had no message from Phil. He lives in Bangor, so I decided to just pop by to see what was going on. He wasn't home, but his wife was. She said all was well! And minutes later Phil came back. He explained he had accidentally sent his message explaining he wasn't coming to some old number of Edwyn's. I suppose he hadn't paid attention to his phone since! But I was reassured, and we just had a cup of tea. The dog was very happy with an attention-providing guest. And while I was there anyway Phil suggested climbing the next day. How could I decline? So the weekend was starting to look like the one two weeks ago; filled to the brim with good stuff! My chores won't get done but I'll have a spiffing time!
Posted by Margot at 14:13