Visit to the Netherlands

My father's side of the family consists of him and his two brothers, and all their descendants. Since a long time ago, they come together every year to catch up. We're not a very tight family; we don't beat a path to each other's doors. And the family day is never complete. I wasn't in the habit to show up for a long time, but then, slowly, I turned a bit away from the fast life of living somewhere else every few years and building a new social life every time, and focus some attention on the people I knew since birth. My interest had been heightened by nice family dinners with cousins only, but last year I joined the actual day. It was fun! I decided to do this more often.

As our family is not the most harmonious in the world it is understandable one seeks solace elsewhere, but with age comes the realisation the best thing to do is to make the best of the situation. You only get one family; enjoy it as much as you reasonably can! And no, perfection won't be found there, but then again, where would it. So when my sister announced the date for the 2016 episode I booked tickets. I had intended to visit the Netherlands a bit earlier in spring, but well, life got in the way.

My first port of call was, of course, my mother. Last time I visited her she had recently been knocked off her bike, and that had certainly not done her any good. This time she fortunately was in a better state! And rather excitingly, we went to buy an iPad together; she had tried a (different) tablet before, but got fed up with it. This time she'd buy an iPad, on purpose, as she knew I have an iPhone; as they pretty much work in the same way, I could provide tech support. So now she can read my blog! (Hallo, Lien!) And of course there was time for buckets of tea, and a beer in the sun. Always good! 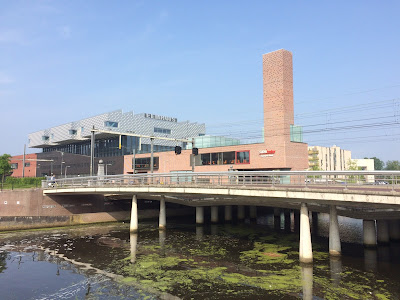 The next day was the family day. I found my father and stepmother on the railway station, and in Hilversum we met my sister and her family. From there we would bike to where the rest of the family would gather, but there was some misunderstanding about where I would get a bike from. In the end I hitched a ride with her husband who was bringing in the food for all 18 people, which is a bit too much for bike transport, even for a Dutchman.

We got to the country park-ish place and waited for the other relatives. It was a lovely day, so that was nice! We admired the resident frogs and storks, and I caught up with my eldest nephew's school achievements. After lunch we went geocaching, or rather, we went for a walk, and had the children find some two caches. The non-children tended to not be overly keen, and none of us had downloaded the premium version of the geocaching app, and one of the keener children cooled down a bit when he realised we were not finding actual treasures. But nothing wrong with just a walk! That also allowed for some updating. How are everyone's jobs, children, relationships? And more of that. And some silliness that helps maintaining the bond too. 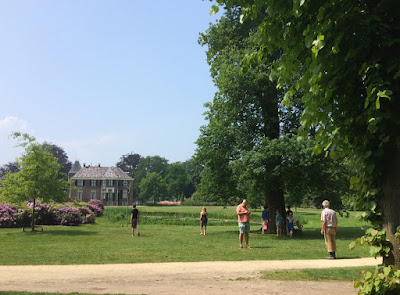 Geocaching on a beautiful estate 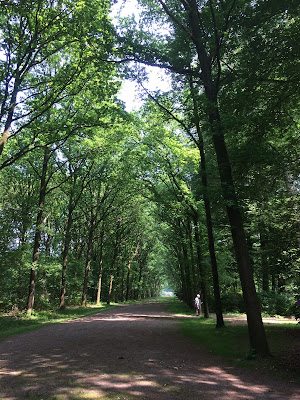 Arty pic of my father reading an information board 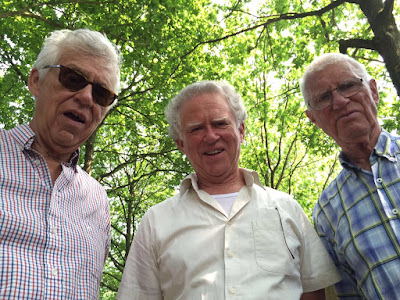 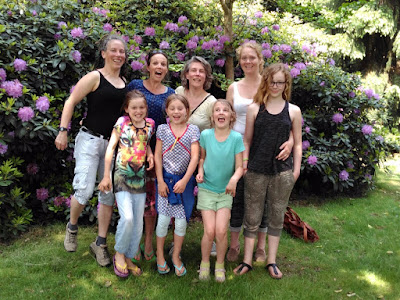 All the ladies, doing an optional and not-very-synchronous jump

When thunder approached we jumped on our bikes and into our cars to go to my sister's. I got to borrow my other nephew's bike. Once there we did a special family day puzzle made by my niece, and then we had soup and quiche. And then people started to leave. My sister was knackered after a day like this, as it had also been busy at work, and she was in bed at a time that's even early for me. That allowed me for some more tea and discussion with her husband until it was bedtime for me too.

After breakfast I went to Amsterdam to see Roelof. We caught up and then had a picnic lunch at the Amstel. Lovely! And then people started to join. That way I also got to see Sløtl, Monique, Erik, Henco, and Maaike. Good! We solved all the world's problems, had a pint, and some of us then went for dinner. 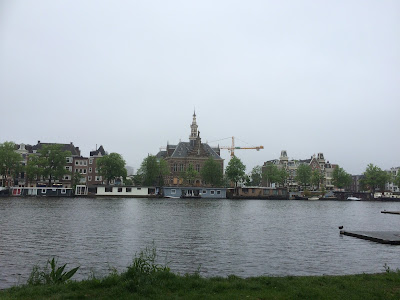 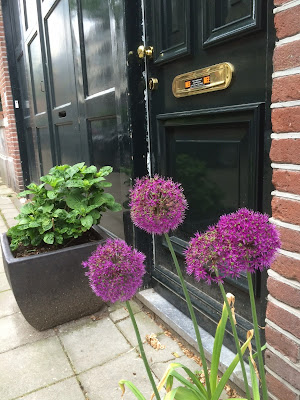 That already was pretty much the end of the trip. The next day I breakfasted with Roelof, and then walked off to go and buy cheese in the Utrechtsestraat. From there I went to Schiphol, where I had some time to read as my plane was delayed. Such happens! But I hope I'll be back within a few months. One only gets one family! But the first next family encounter will be in Wales. My sister will visit! Watch this space!
Posted by Margot at 19:13