Talking about the North Sea

Last year we ventured onto the Celtic Sea, the Irish Sea, and the waters west of Ireland looking for traces of the ice sheet that had once covered these lands. That should sort out our knowledge on the western edge of the former British-Irish Ice Sheet. But it had an eastern end, too! This year we'll go and sample the North Sea. This is the difficult bit; from the moraines and drumlins and other (sub-aqueous) landforms you can pretty much straight away how the ice moved on the western side, and all you have to do is date the movements; in the east you have to figure out what happened first before you can go and date anything. We had a lot to learn. And an outstanding opportunity presented itself. The Quaternary Research Association had chosen the North Sea as the theme for its annual discussion meeting. So while still struggling with the last spate of marking of the first term I registered. I wouldn't present anything; we had nothing to say on the North Sea yet. But I'd soak up all that North Sea knowledge! 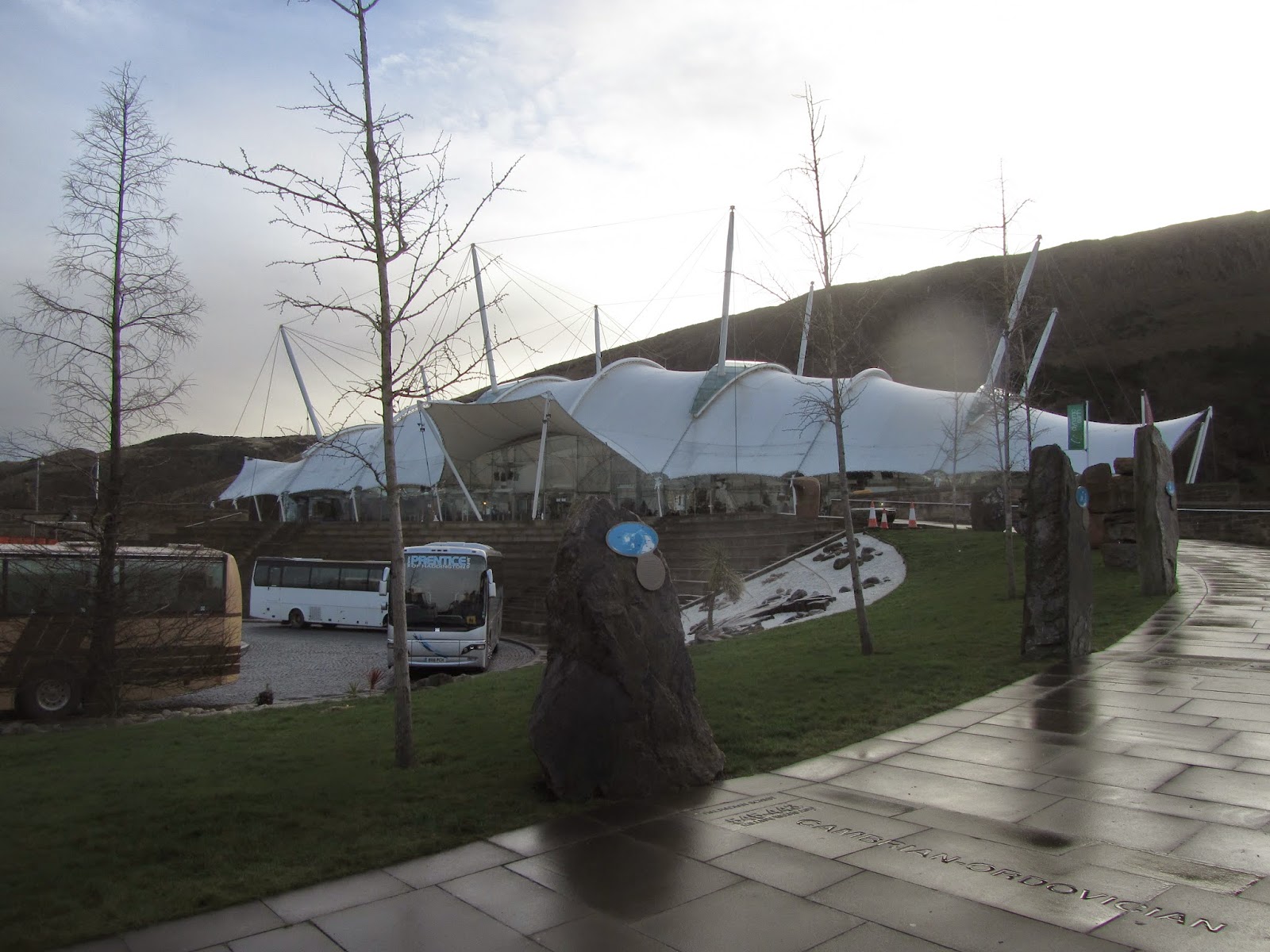 The venue, which one reached along a path that represented geological time and the Scottish rocks associated with it

The meeting would be in a venue called "our dynamic Earth"; some millennium-related place of popularisation of general Earth science. I hadn't been there before, but I was pleased to see it was right at the edge of Holyrood park. I had been there before, some three years earlier, going for a walk. This time I would try to use it for another training run! I didn't want to lose momentum this close to the race. But first things first. I took the train to Edinburgh, walked to my hotel, dropped my bag, and went to the venue for the icebreaker. I got my name tag and my information package and went to find the drinks. And upon descending into where these were distributed I was flagged down  by Robin Edwards. Nice! He had done a postdoc in Amsterdam between 1998 and 2000, which meant I had already known him for 16 years. Later I saw there was an equally old acquaintance there: Wim Hoek. But most people there I either didn't know, or had only known for a few years. I was good to see him! 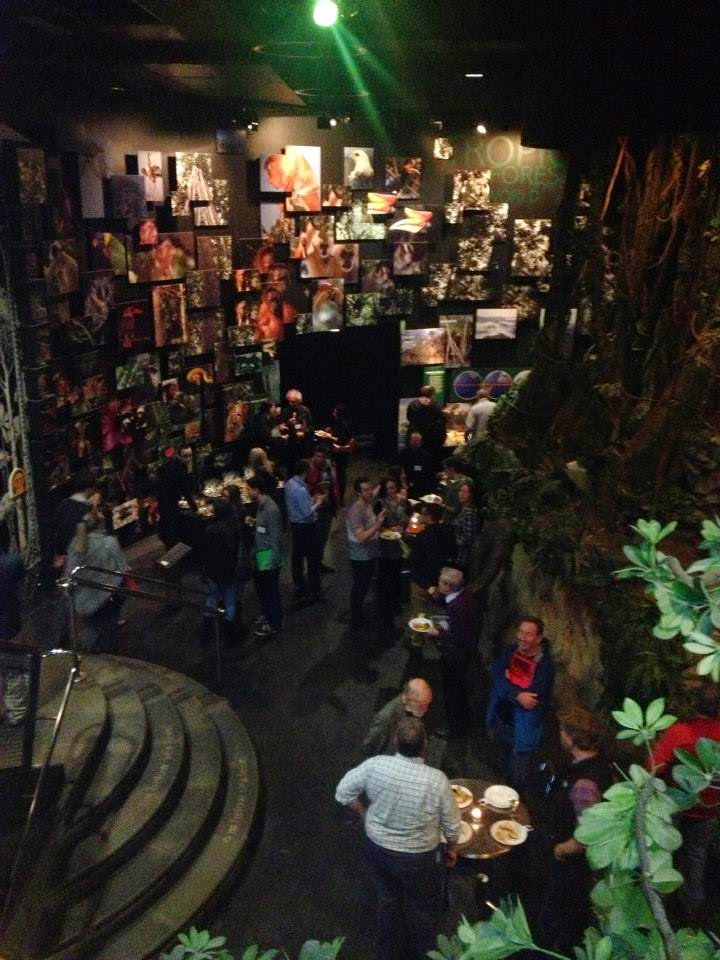 The icebreaker in the rainforest-themed part of the venue. Picture by Marian, last cruise's Marine Mammal Observer 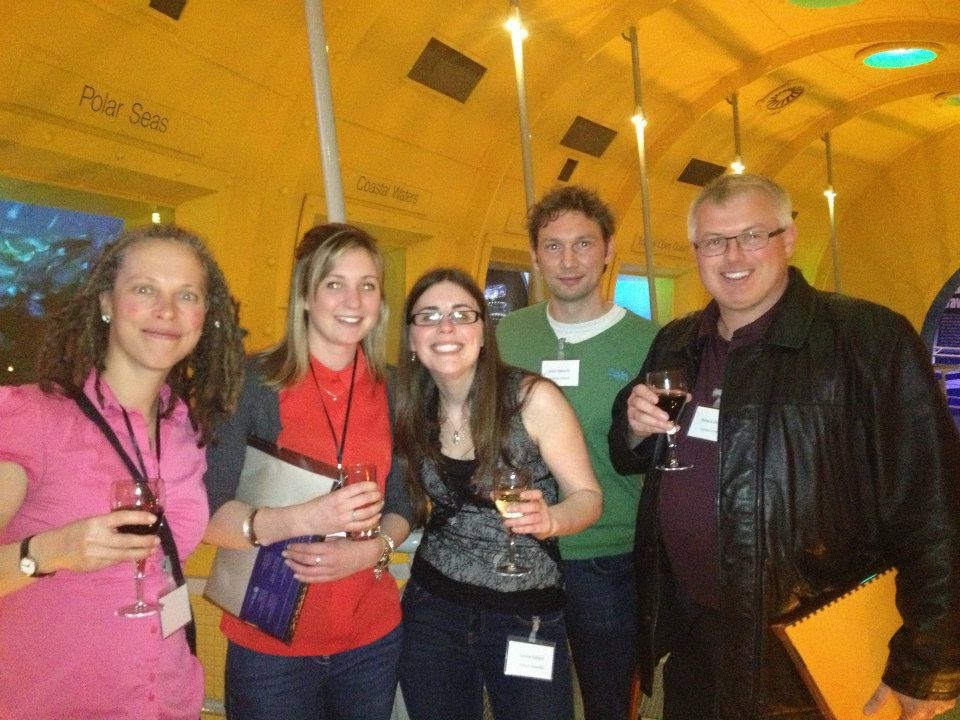 Socialising during the icebreaker: fltr me, our own student Zoe, Louise, Robin and Richard. All these except Robin were on last year's cruise. Picture by Marian

From the icebreaker we went to the pub. I managed to leave my information folder there. Oh dear! I feared that would happen. Luckily I had printed out the preliminary schedule. So the next morning I was well-prepared for the talks. And it was very interesting! People have done a lot of research on the North Sea. For all sorts of reasons. And I was sitting there, taking it all in.

After the last talk we would gather with a lot of BRITICE-associated people, to discuss what we would do with radiocarbon dates. We found a table somewhere, but were booted out as the venue would close. James suggested we relocate to the hotel where we were both staying. And chose my room. As one does! But I must say, I never had such a stellar scientific team in my bedroom. BRITICE's primary investigator, the chief scientist of the cruise, two more BRITICE professors, and then two radiocarbon experts and my fellow postdoc Louise. It was interesting to fit them all in but the meeting was a success.  We're ready for the dates coming in! And afterwards we went to the pub. Of course. And while we were there anyway, we had dinner there too. Haggis!

The next morning started with a session on stuff that was older than the last glaciation. Very interesting, but not of acute use for the current project. So that was my chance on a run! I went into Holyrood Park. I noticed it was very windy, and I figured I should not go up to Arthur's Seat, but when it came down to it (or up, rather) I couldn't resist. I had to hold on to the triangulation pylon at the top for dear life! Blimey. I had to get down. On the way I was caught by the wind once, and struggled to regain control. I decided to stay low from then on! Which I did. A nice run. And then back tot the North Sea. 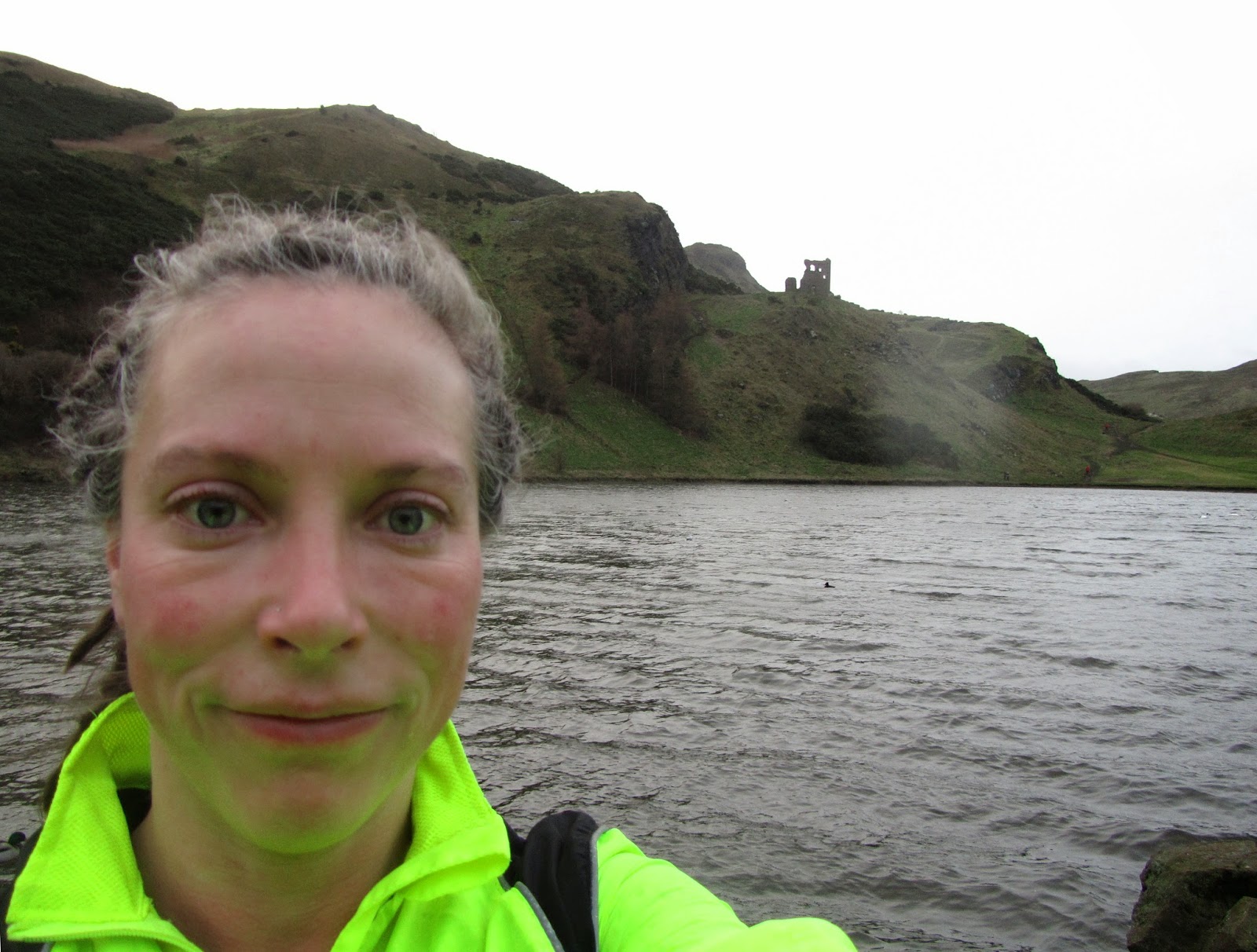 Nice ruin passed on my run through Holyrood Park 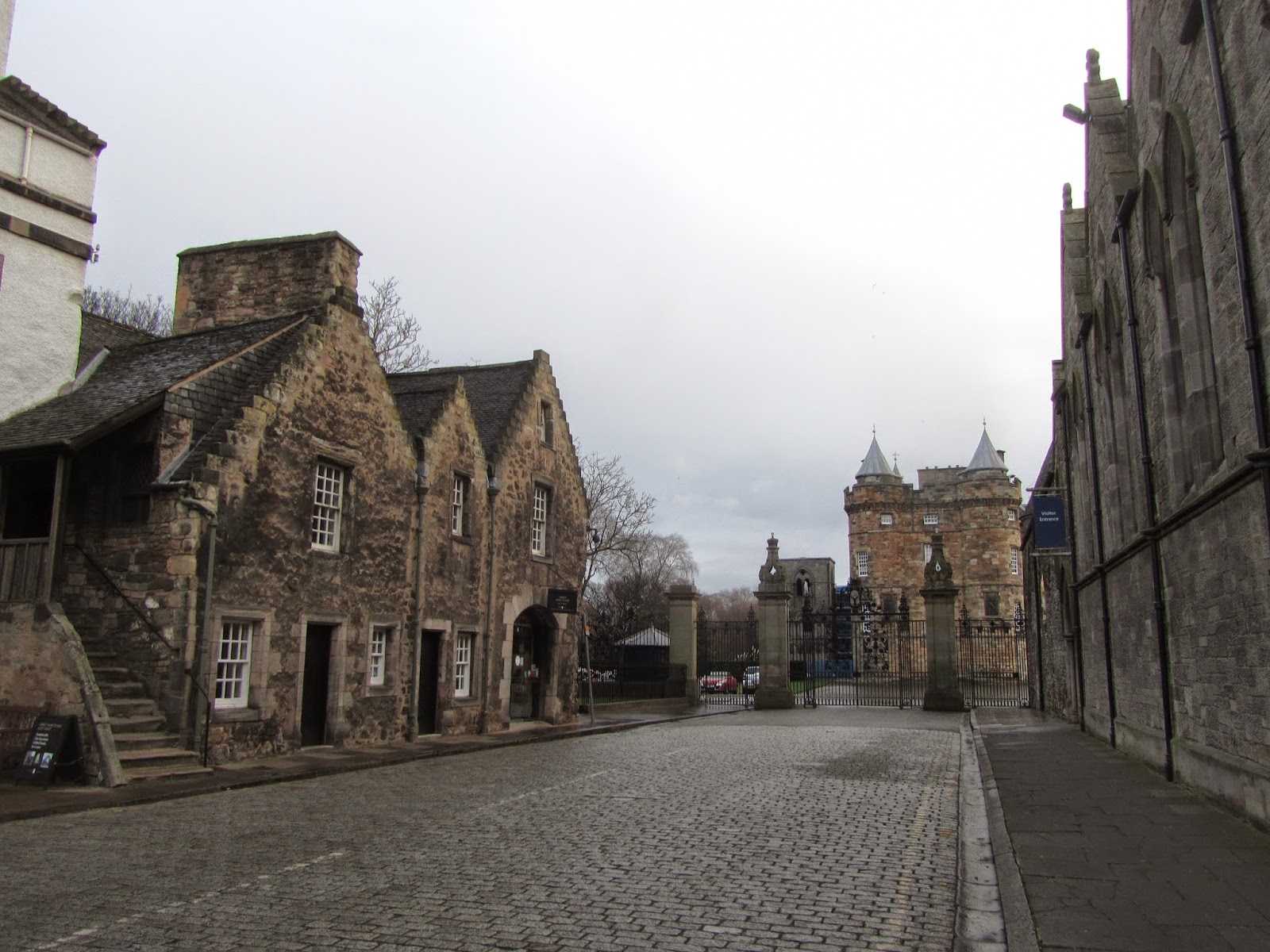 I came past Holyrood itself too

The North Sea is studied by people like me, but also by archaeologists, and windfarm engineers, and geophysicists and geographers and who not. But they all aim to understand the sediments, which means understanding what happened. So all of that was useful! And it's also good to consolidate existing contacts, and make some new ones.

That day ended with the conference dinner. It was on the other side of town. It rained when I set off; it poured when I was on my way. Blimey! But one is not made of sugar. It was nice to have a pre-dinner pint and the dinner was nice too. I went to the pub for one post-dinner pint, but was very aware of bedtimes, and was the first to leave. 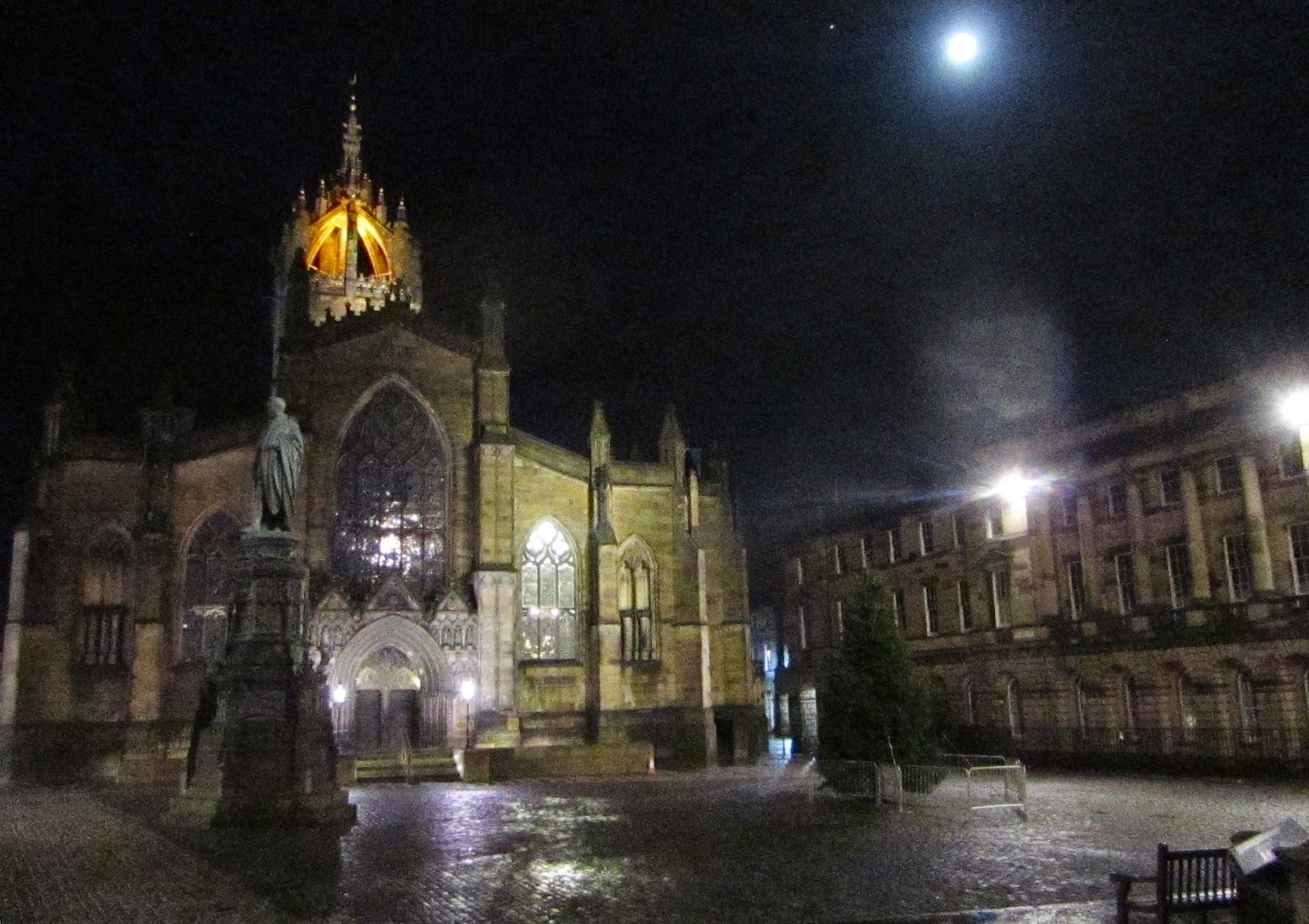 On my way back from the conference dinner

The next day was interesting from start to finish. And at the end of it I just had time to kiss as many people goodbye as I could (mainly the Dutch, of course; Brits aren't much into that, although I managed a few) and had to then scamper to the railway station. A good start of the working year. The next day would be back to normal!