Am I stuck in a rut? No, I suffer invasion! I'm not sure if I'm in a mould of sorts but I certainly encountered too much mould. (In spite of what I initially thought, it seems you can't distinguish the cast and the fungus by spelling.) When autumn hit I noticed my house was very damp. When autumn progressed I found out that means several annoying things: firstly, the damp gets into food. I chuck tonnes of rice into my salt caster but it doesn't help. The salt gets chunky and won't come out. And foodstuffs that attract water have to be packed water-tight as otherwise they get soggy and slimy. Not nice! And secondly:  mould. In the wardrobe, in the clothes cupboard, in the boxes under my bed; it pops up everywhere. It's very annoying, and I can't imagine it being very healthy. When I came back from my trip to the Netherlands I switched the heating on, and kept it on 24/7. That goes a bit against my upbringing, but that way I might get to dry out the place.

And then someone mentioned the concept of a dehumidifier to me. I was aware of them, of course; they especially tend to pop up after emergencies. When a colleague in Norway had her house flooded by a burst pipe, for instance. Or when a colleague here in Bangor was so unfortunate to have a radiator in his office that transformed itself into a nice hot fountain. While he was teaching on the mainland, which meant it could proceed unchecked until someone saw the water creep underneath the door. When the bailing and the mopping was done, the dehumidifiers came in! But I hadn't thought of them as a possible solution to my issue. But they very well might be!

A few days later I popped to the local B&Q and bought the most suitable-looking specimen. Big enough to make a difference, but not so big as to get massively in the way. After a stint in the kitchen I moved it to the hall, where it might sort out all the rooms at the same time. And it's got something to do! When I came back from the Netherlands I emptied it; it had been cold, so it wasn't very full. Cold air doesn't hold much water. But upon coming back I switched the heating on again. And then it filled up completely within 12 hours, twice in a row! That's 4 litres out of the house in only a day. I think it was a god investment. And now I can sprinkle salt on my food again. And no new occurrences o mould since! 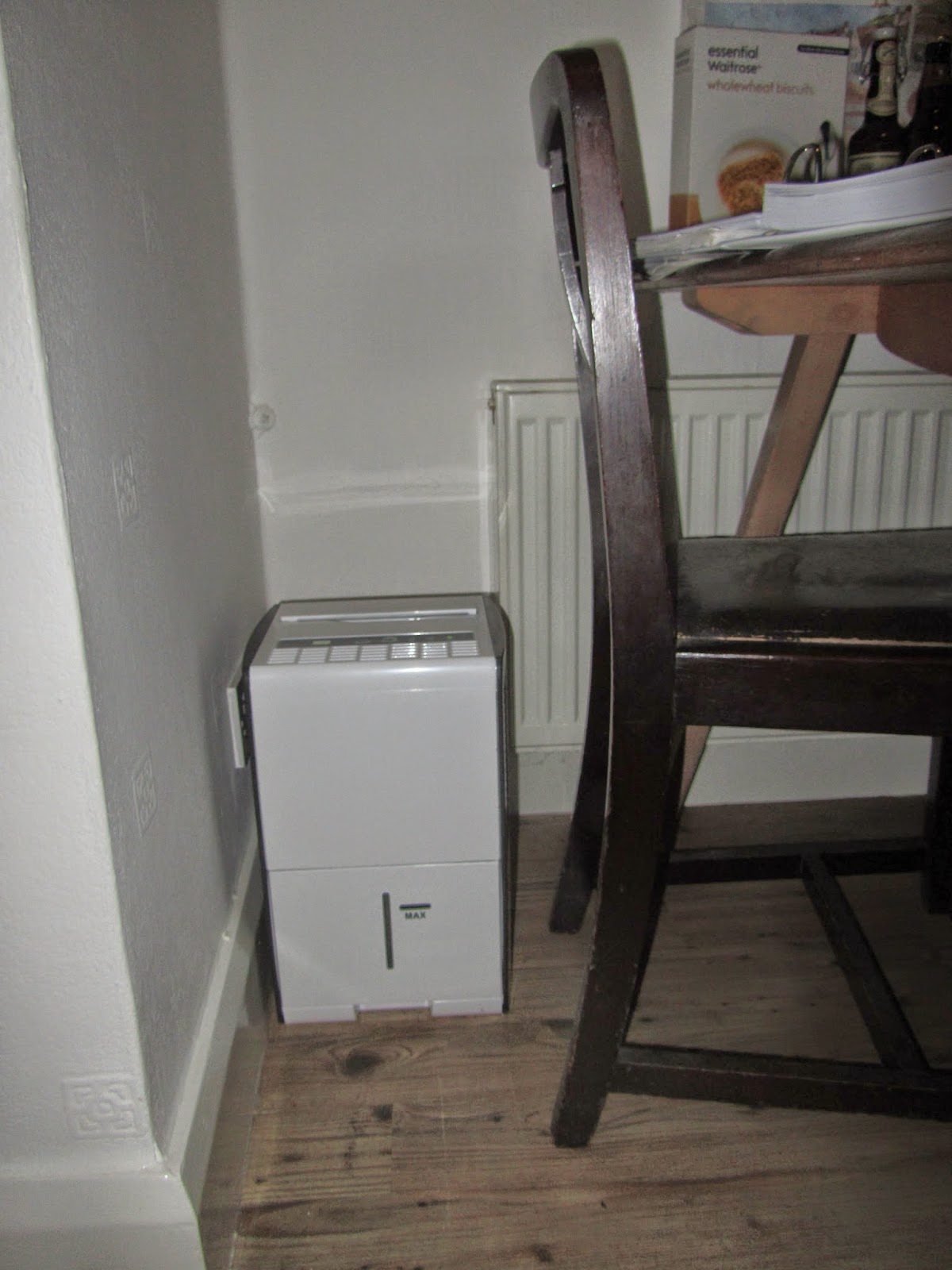 Modestly gargling away in the corner: my new dehumidifier!
Posted by Margot at 10:20