A firm behind; an asset in a car

Nobody who has seen my car will be surprised that some parts are not working quite as good as they presumably did when it was still new. Some don't work at all. One bit that had started out alright but was now giving up was the tailgate. Or rather; the struts that keep it open. In dry, quiet weather and on flat terrain they still worked, but if it was rainy or windy, or I was parked uphill, the door wouldn't stay up. And my drive is a slope. While I write this I figure I could have chosen to reverse onto it; that would have made it easier to get stuff out, but I didn't actually think of that before. And that wouldn't have helped against the habit of the tailgate to slam shut when the wind catches it. I have been knocked on the head many times by that bloody door! It hurts. And my car is often used for caving purposes, and when I go caving I bring a helmet, so an interim solution was just to wear that anytime I had the boot open, but you can't wear a helmet when you're taking off a T-shirt, or putting it on. And sod's law decided it is these moments when the door comes crashing down. And trying to get big heavy things out of the boot with one hand while keeping the door open with the other is a faff too. As is resting the door on your head while you get stuff out with both hands. So to summarise; the tailgate wouldn't stay up and it was a nuisance. But I was resigned.

Who other than David offered the simple suggestion of replacing the struts that do the keepy-uppy work of the 5th door. I see cars as mobile enigmas; for him they are projects. These struts seem to be both rather affordable and easy to replace. That sounded spiffing! And thanks to him referring them as struts I now knew what they were called. It can be a nuisance to try to find information on things of which you don't know what they're called! And that is a common feature of car parts. In my world, at least. But armed with this new knowledge I went to eBay to see what I could do. And saw a pair of struts. And bought them. I thought. I hadn't paid enough attention; the picture was of a pair of struts, but the description was singular. The cheeks! But it promptly arrived.

I found a description of how to replace them on internet. I love internet in such occasions! There is hardly any chore you could ever need to do for which you can't find a guide online. And it looked simple. And when the rain abated a bit on a Sunday I arbitrarily chose the right strut and replaced it. And the door stayed open! On a damp day, on a slope! Sometimes the simple things in life can be so rewarding. 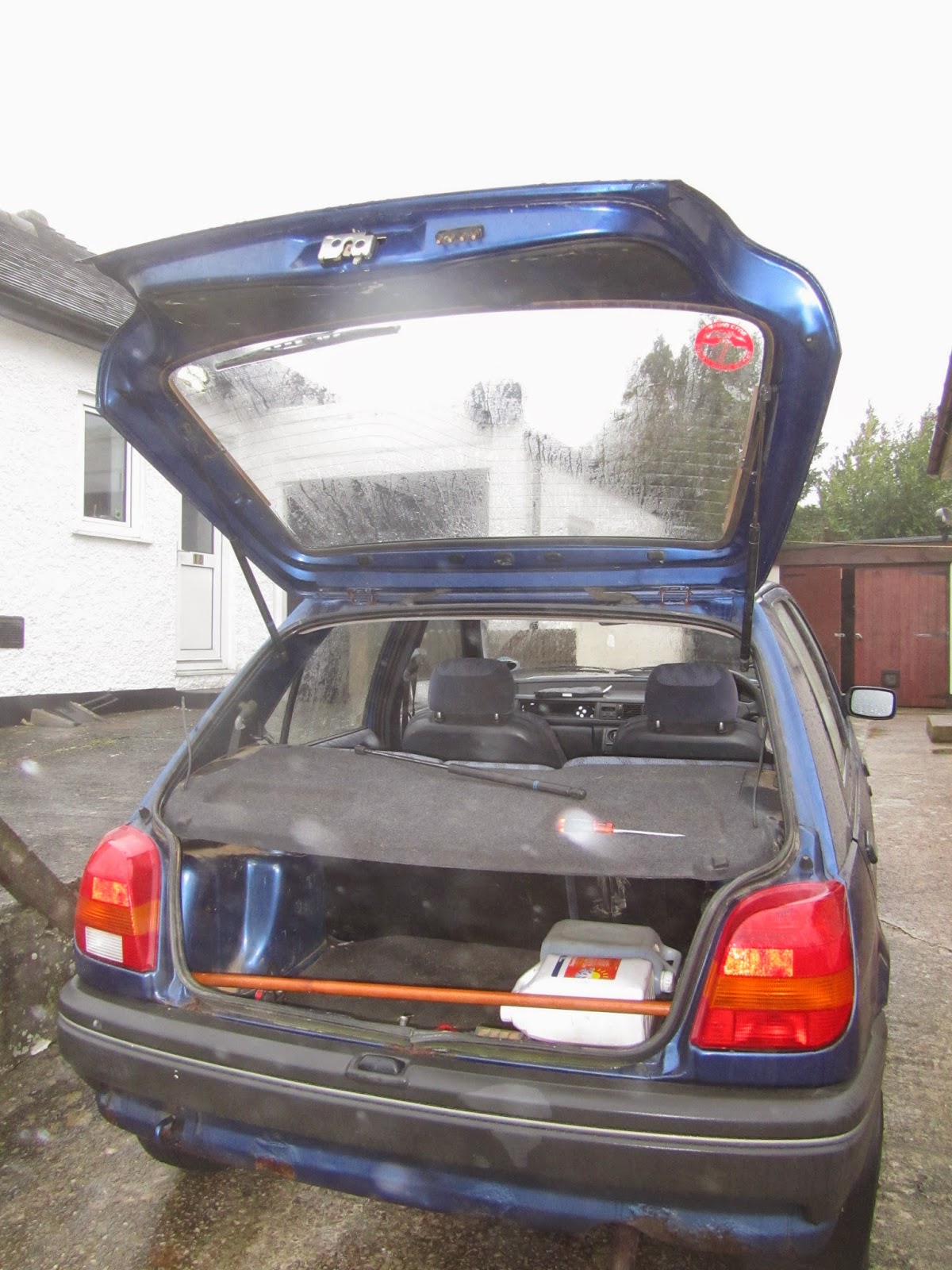 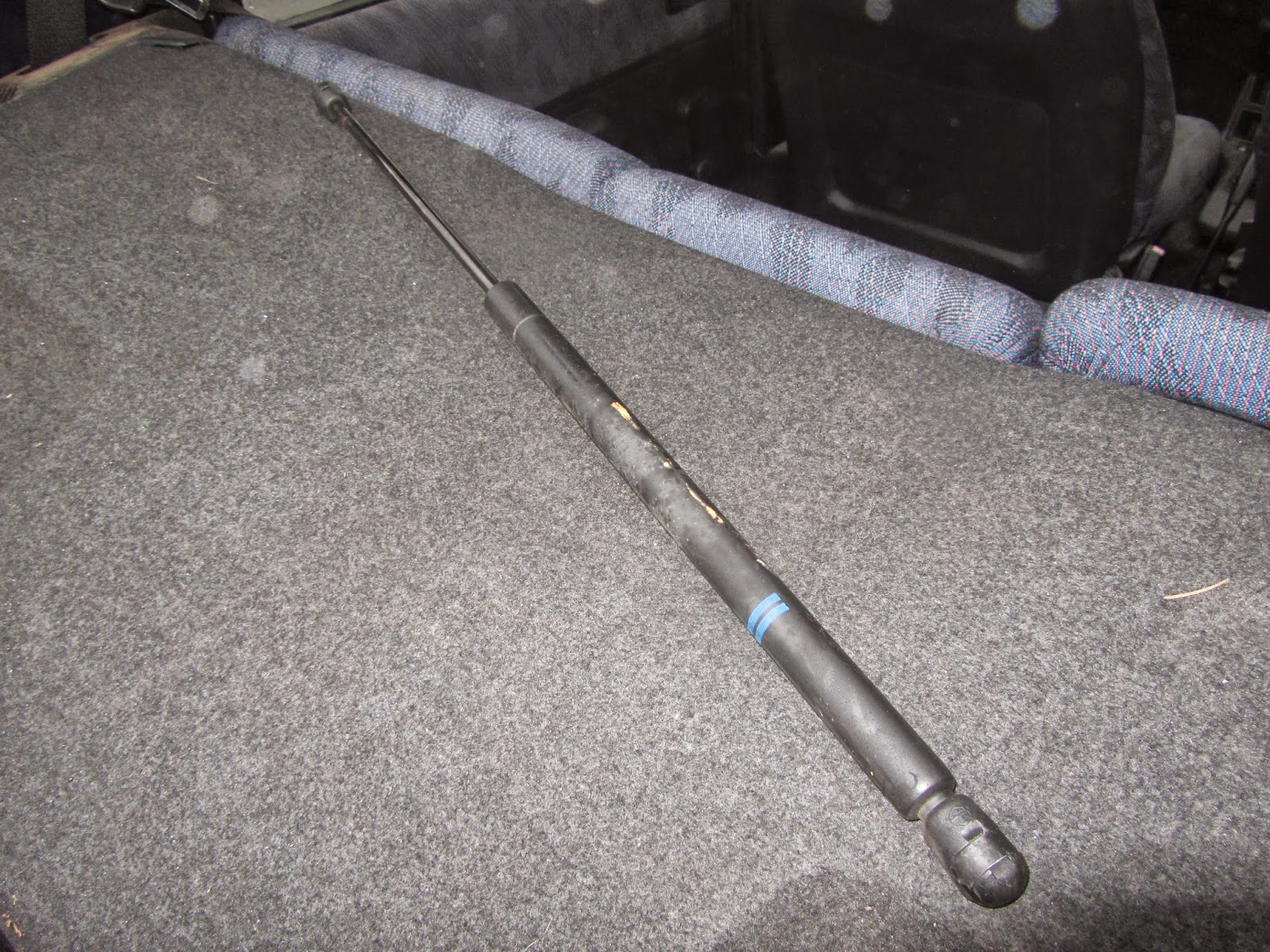 
It had been a calm day, though, and it's nice if your tail also stays up in the wind. When I was packing my car for the next underground trip, I noticed that in some wind, the door still comes down. Bummer! But now I knew what to do: I just ordered a second strut, which arrived on the day of the underground trip (nice and quick!) so when it was time to go I just popped out a few minutes early and replaced the left one as well. And since then the door has been behaving. Bob's my uncle!