New Year's Day fell on a Thursday. It's not the sort of day on which routines tend to continue, but some inquiry revealed many of us wouldn't be doing anything exciting the day before, and we could well get underground as per usual. Nice! But not something very demanding; just a nice stroll. Was the idea. And that idea got reinforced my messages saying that Paul wanted to try out a new stove and would make us tea. David wanted to try out an oil lamp. So it would be civilised! I would not even put on my suit. Just quick-dry stuff would do. And I didn't pick any kit; just a flask of hot water (for backing up the stove) and some Dutch delicacies my father had given me. They're best when shared!

David picked me up, and through gales and torrential rain we drove to Blaenau. There would be only five of us today. We walked over the path along the river to the entrance; that was quite something! Mick, who had lived in Blaenau for Donkey's years, had never seen it this torrential. It was very impressive! But we were glad to get out of the rain when we reached the entrance.

We first did an explore. I had only been in this mine once; I clearly hadn't seen it all! It was a nice stroll. We had one scare, when we suddenly heard a thunder; the fear of every mine explorer. Had a part of the ceiling collapsed? Not on us, fortunately! But when we climbed up to investigate we were met by a flock of sheep. Be they the culprits? David kicked a rock down the steep slope. A similar sound! Maybe it had just been them. We decided it had been.

After a while it was time for tea. David had snacks and I had my gemberkoek and Haagse Hopjes. It was a veritable feast! Paul not only had a stove, but also a carbide lamp. A cool little thing! Maybe good for the annual Victorian mine trip. It was all rather snug. 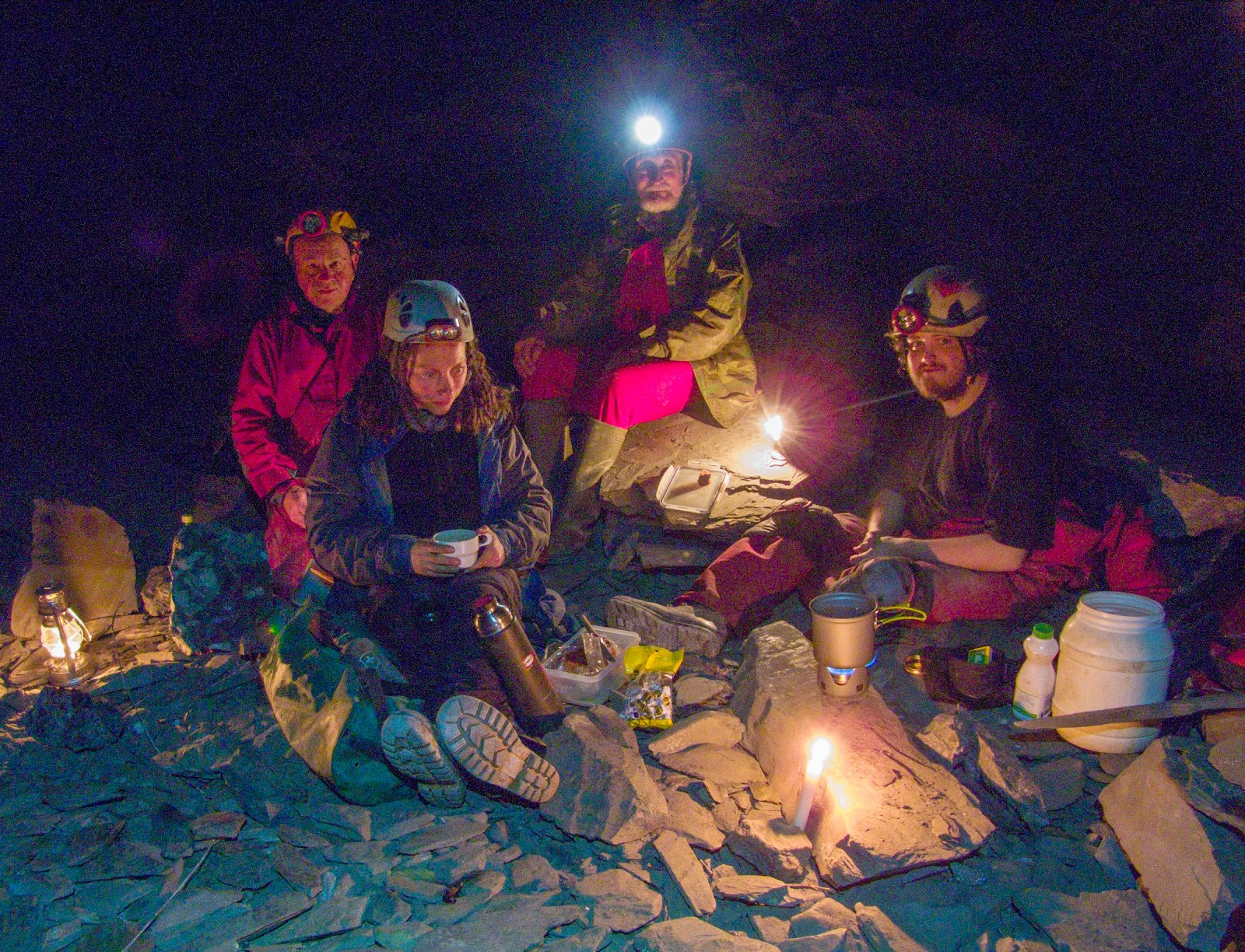 Even though we were close to where we had come in, we didn't go there afterwards; we went all the way up instead, and went down again via the outside. I wasn't so keen; I was tired, as one expects from someone who has already run two hours that day. And it was getting late! When we were finally back on the valley floor we took some pictures of the river, as we figured we'd not see it like that anytime soon. And when we were back at the cars, Mick even suggested having a cuppa at his place first. I declined; we had had litres of tea already, and it was 23:30! Blaenau is an hour away from Menai Brige. I slept on the way back in the car. It had been a bit much of a good thing...
Posted by Margot at 11:52