When I moved to Wales I started looking for races. There wasn't much! After I'd been restricted to a treadmill for six weeks due to being at sea I looked a bit harder. I found the Caernarfon 10k and the Awyr Las 5k. But that was all on the road! I prefer trails. I couldn't find any trail races. But then I found out one of my colleagues ran; he had just done a big fat trail race further east, and he knew of a trail race up here on Anglesey. He said there were many distances; he would go for the full marathon. I had a look at the site.

So there was a 10k, a half marathon, a full marathon, and an ultramarathon. And the races were described as "strenuous". Not a race to try out the concept of a marathon! I want to do one one day, but this sounded a bit too much. The winning time of the half marathon was already twice that of the Plymouth half! So the half marathon would probably already feel like a whole one. I registered for it. And then when the time approached I got a bit apprehensive. Was I trained up for it? My half marathon times had been 1:53 and 1:50; I figured I'd need twice that for this race. Almost 4 hours! I had never run that long. And we had to cross Holyhead Mountain twice; when I had been there the week before I had almost been blown off it. And my knee had played up. Would it do it again?

But then the day came. I got to the venue, parked the car at Holyhead Breakwater, and walked to registration. Along the way I got gestured at from a car; two colleagues were parking too! It was an SOS couple of which the woman would run, and of which the man is my office neighbour. And they had brought the dog too. Nice to see familiar faces!

I walked on, and saw the colleague who had pointed this race out to me start on his epic journey. He looked happy! But he is that kind of guy!

I registered, went to the toilet, and then reconvened with my colleagues Coleen and Andy. And after a while I changed. I didn't want to spend any more time than needed in my running shoes, so I had walked in on my walking boots. Time to start looking the part! But that was cold. And they took forever to brief us. I didn't want to be on my feet all that time! But what can you do. And then we lined up before the start. And off we were. 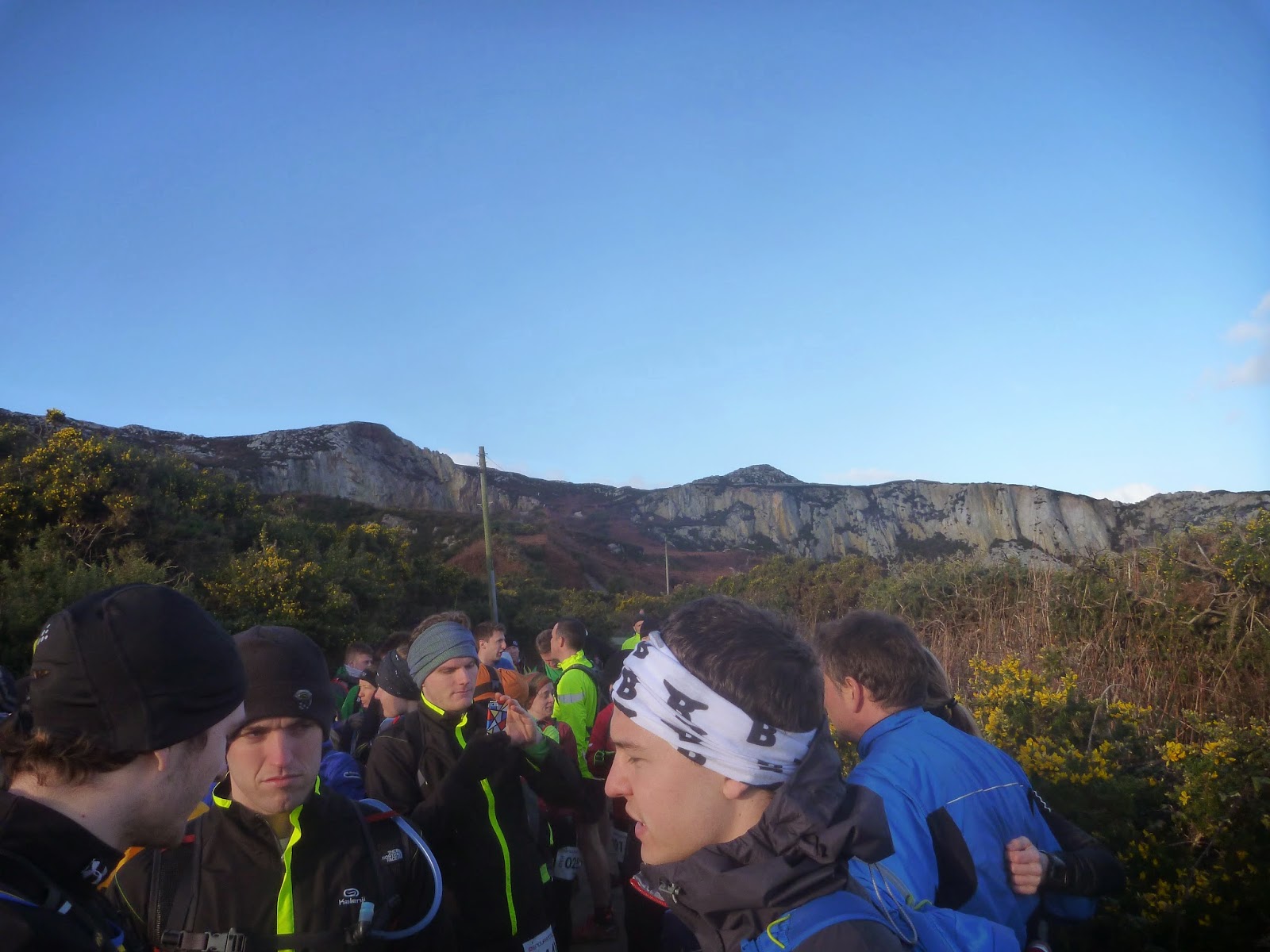 Within tens of meters the road was flooded. One could try the roadside (which were clogged with runners) or go through. Coleen and I went for through! But this is January; we couldn't feel our feet for a while afterwards. Oh dear. But soon we were on the coastal path, with sun and space and loveliness. After one kissing gate Coleen said "see you later"; did she need a shoe laces break or something? No time to find out. I scampered on, onto Holyhead Mountain (but not all the way to the top), and then down again. Later I found her right behind me again. And then I got a stitch. Bummer! It does hurt. Would that be a lack of training? I should look up what they mean. But Coleen thundered past and became a yellow dot in the distance. I hobbled on. 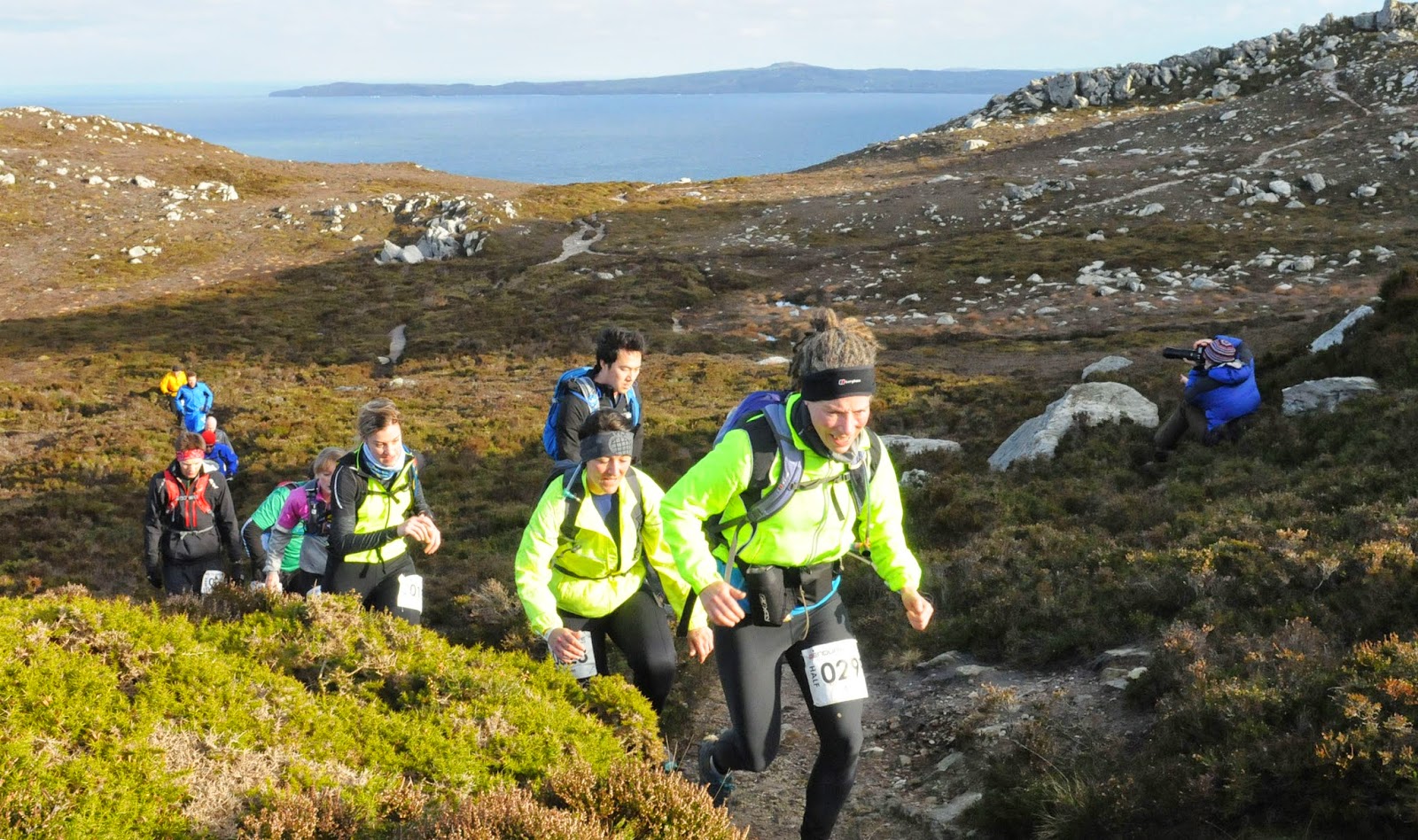 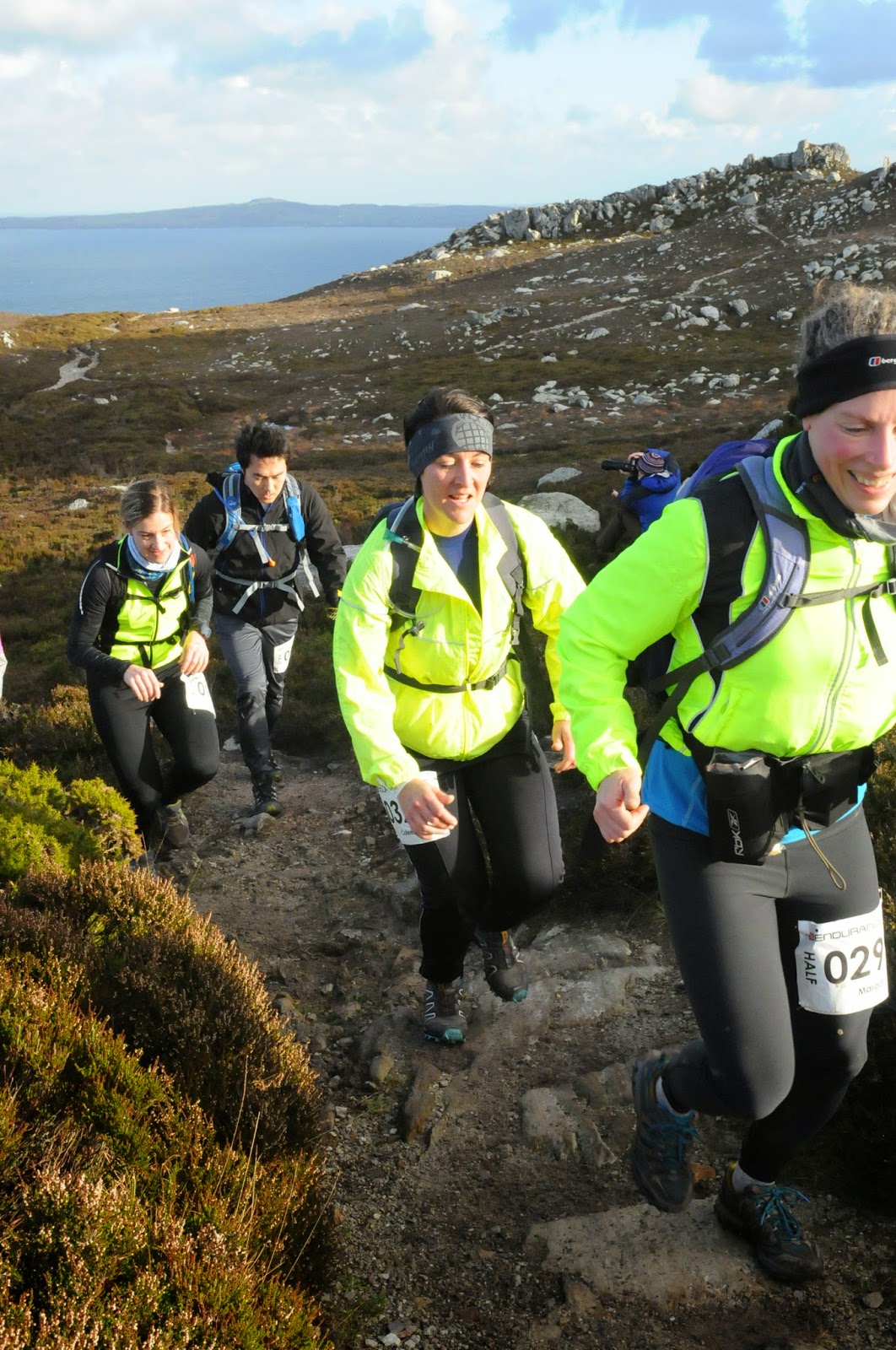 Coleen and me scampering up a hill; we look like we coordinated our outfits!


We got to South Stack, which hosted the first checkpoint. I'd been here before a week earlier! And the stitch started to get less bad. I picked up a bit of speed again. And then I saw Coleen's yellow dot again. I came closer. She was walking; her legs had packed up, she said. Oh dear! There was still so far to go! So legs or no legs, we started running again. I gained a bit of a lead, but I was starting to feel my stomach contract. I had had breakfast before 8AM; we hadn't started until 10:30AM, and by now it was approaching noon. And I was burning calories like nothing on Earth! So I stopped to eat a granola bar. And of course, Coleen reappeared. We scampered on together again for a bit. And together got to the second checkpoint at 9 miles. Beyond halfway! But Coleen's legs were killing her it seemed, so that's when I left her. And happily hobbled on for a few hundred meters. But then I felt the usual sensation in my left knee. Oh dear. That had buggered me the week before! This was going to get interesting. 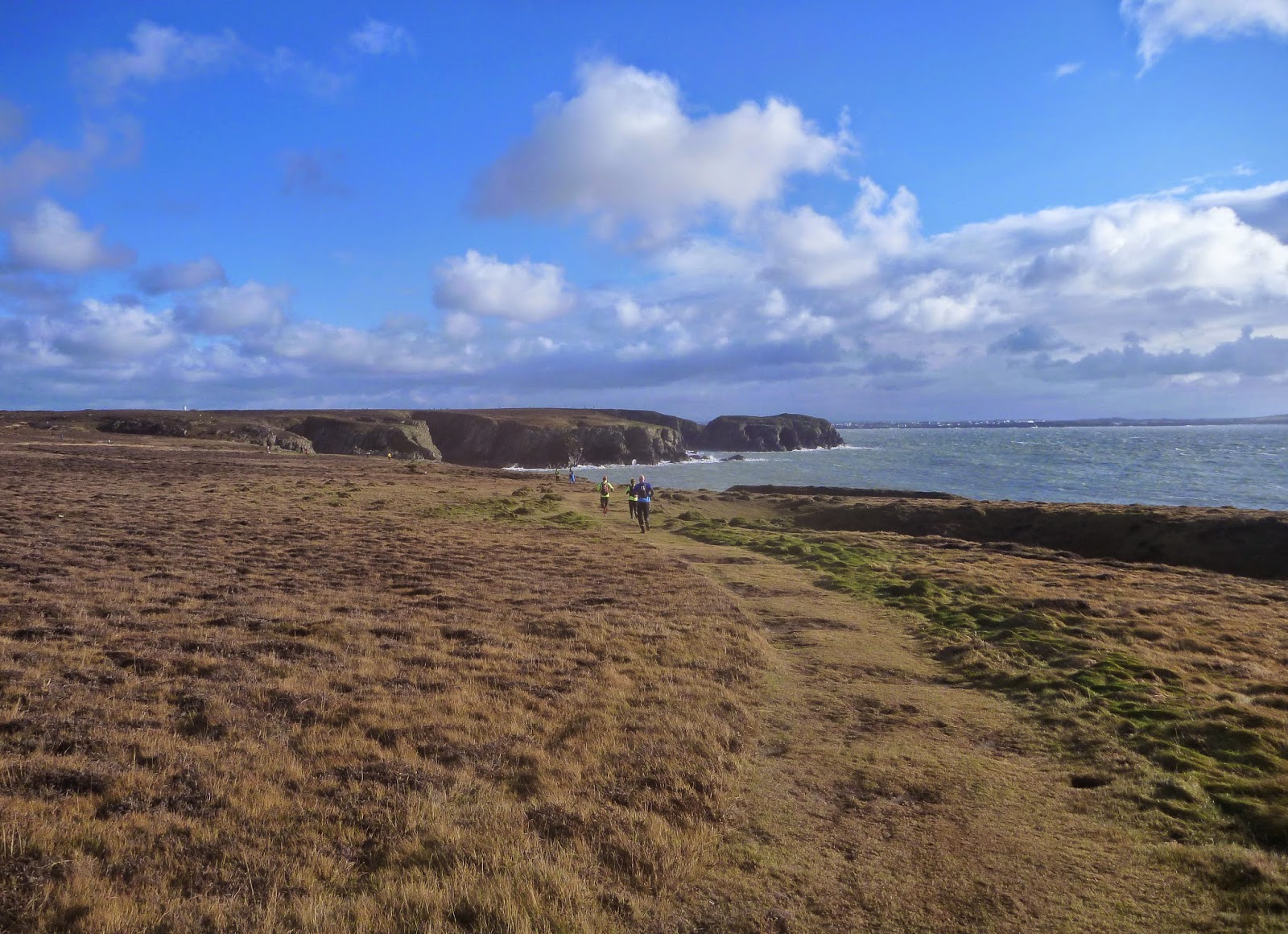 I just tried to hobble along as well as I could. I know this issue; it's been coming and going for some 10 years. If it hurts today it might be all fine tomorrow. I don't think I do much damage by running through it. It just hurts! Especially downhill! I tend to not have a problem when I run on flat terrain. Maybe I should choose my races accordingly. But anyway; I still had a fair distance to go. I just did what I could. And made things worse; we came through a muddy field, and I figured I was dirty already so why not take the straightest route, even if that had the deepest mud. That was a mistake! I struggled to get out of that swamp. And I dragged a kilo of mud with me from there on.

Fortunately I got to the mountain. The paths there are so steep one tends to walk anyway. And up is alright on my knee! But of course I got to the top; from there it would be interesting. I just did some stiff-left-leg hop down the path. I sure wasn't the only limpy person! And on my way down I saw I had only been in the race for 3 hours; a lot less than I had expected. And then I got to the finish. Made it! In 3:07:57. I found Andy and waited for Coleen, who appeared only 6 minutes later. Success! We chatted for a bit, and I got introduced to the woman she had been running the second half with. We might all do the half marathon in Menai Bridge in March. Nice! 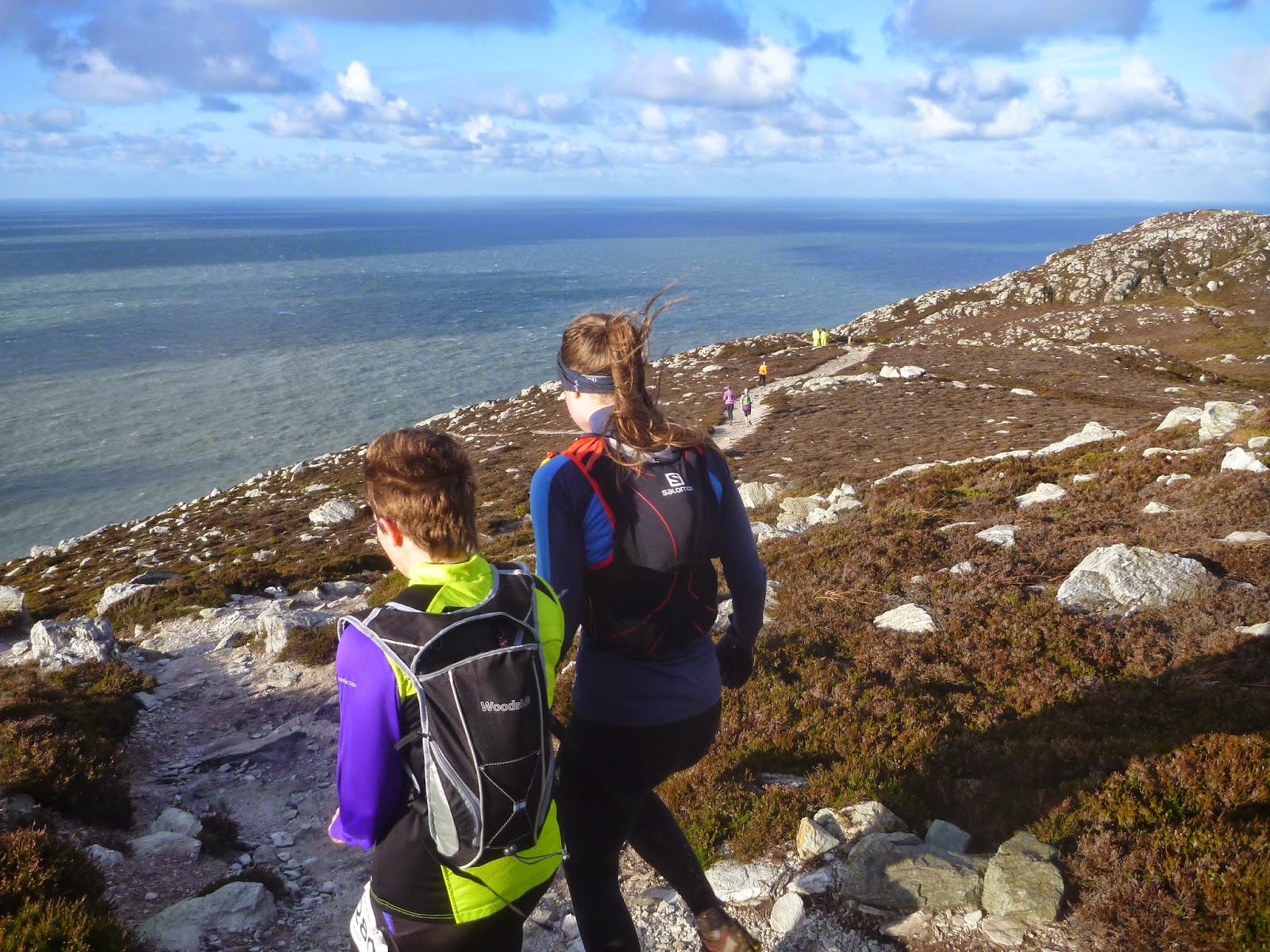 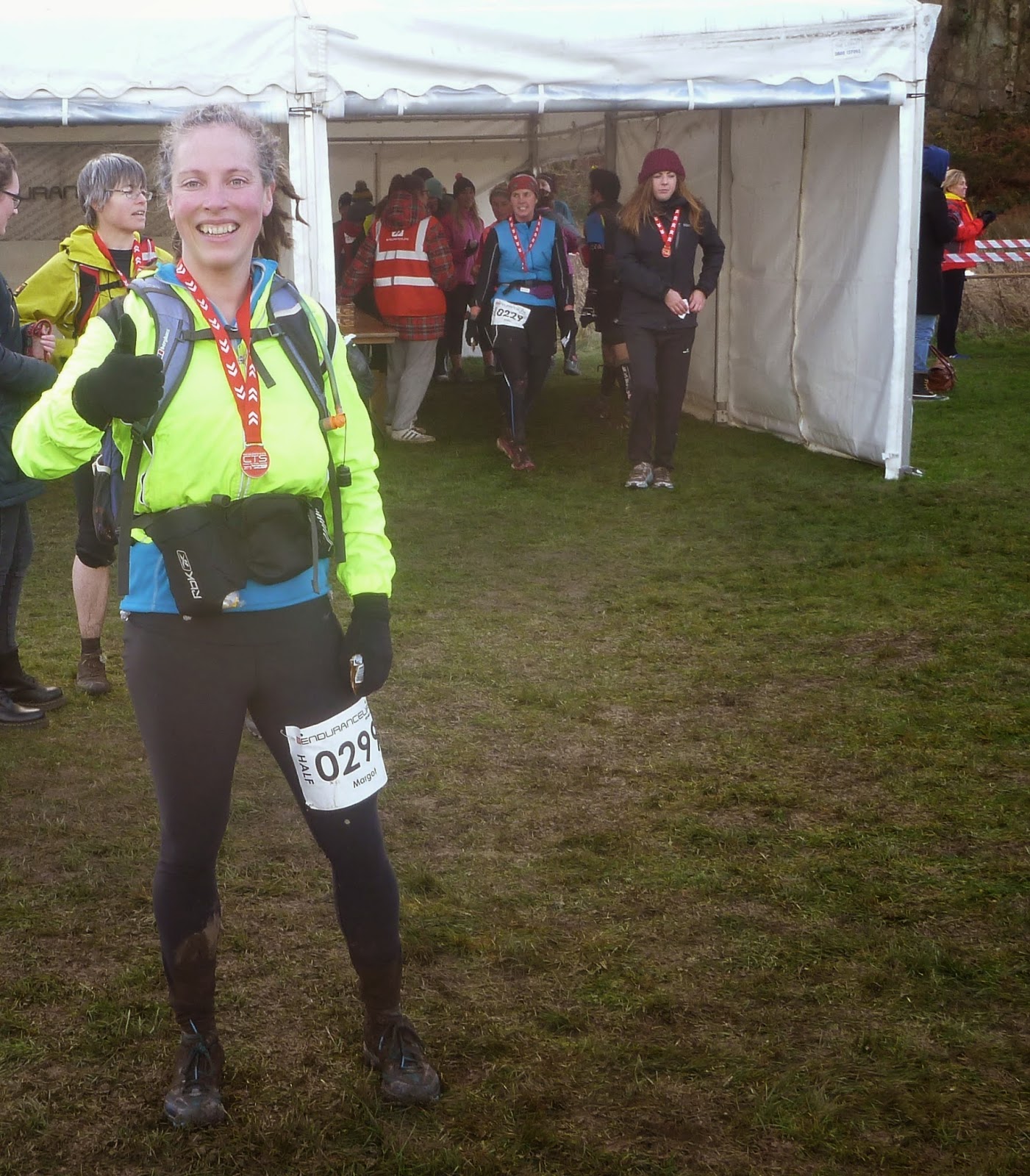 Even though I'd put on a jacket I was getting very cold. I wanted to leave! Together we walked back to the cars, where initially I planned to put on dry socks and shoes, but then decided against and just went home. When I got there I figured I was cold, stiff, dirty, tired, hungry and thirsty, and had sore feet. And that the most efficient thing to do about that was to run a bath, boil the kettle, and then have lunch (with lots of tea) in the bath. And so I did! It was even better than I had expected, and I came out revived. And contemplated my racing future. Should I try a marathon? Should I avoid hills to appease my knee? Should I just stick to max 10 mile races in order to not have to worry about it? Watch this space!