We walked into a pub. And the first of us walked out again almost immediately; "not enough teeth to go around". One can hardly judge someone's morality by their number of teeth, but the sentiment is clear: that pub was a bit to chavvy for given gentleman's taste. This was Plymouth. And it was a sentiment that was not rare.

That was Plymouth. This is York. Things are different! And of course there are chavvy pubs here too. But plenty of nice ones as well! In Plymouth pubs were sometimes needed as a meeting place for friends, but there were only a few that were an attraction in themselves. I liked the Providence, the Clovelly Bay Inn, and Nowhere, and that was basically it. But after only three months in York I already have been in several pubs that are nice places to be in. Go York!

I have a favourite. When I came to York, I asked around what the good pubs were. And tried them out. Nice ones! But the best one came falling out of the sky. In August there was a period where many of us went away for a while. I did too; I went to Scotland. And when I came back there was this one day that everybody was in town. So we went to the pub before everybody scattered in all directions again. Tom suggested "Pivni". I had to google that one! Nobody had mentioned that place to me.

I saw it was in a inconspicuous corner of town, and served many different beers. I came in, and saw that was true; all these unknown beers on draught! And picked an IPA and intended to work my way through them. Until one of the guys came up with a Westmalle or something like that. What? Belgian beers? I had to check out what they served from a bottle. And then I saw an old friend: la Duchesse de Bourgogne! That is a superb beer. 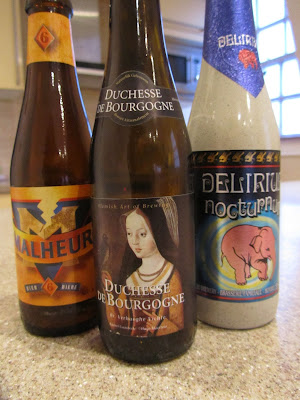 Picture from last year, when I had visited the biggest beer shop in the UK; first time I met the Duchess 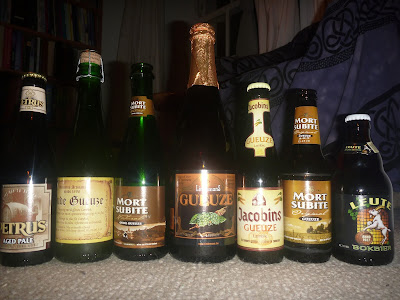 More beers from Beers of Europe. Many gueuzes! And they had several in Pivni too!

They had more interesting stuff. Orval, Oude Gueuze, you name it! I love that place! And it's bad for your wallet; these bottles don't come cheap. But what a range they offer! I want to go back there!
Posted by Margot at 18:33