On Friday, around 5PM, I submitted my paper on sea level in Iceland. And with that, a very hectic week came to a dead stop. I looked around, and there wasn’t anything specific planned for the weekend. Strange! But it meant I could go explore the surroundings again!

I picked a walk around Goathland – there seems to be an old mine there, and I might visit that one day. So why not check out the surroundings first? So after a quiet morning (after a week like this I wasn’t going to rush) I got into my car and drove north. I would drive most of the way to our Tuesday venue, but upon reaching the moor I would go on instead of skirting around its edge.

It was beautiful! Soon the whole world vanished, with the exception of purple heather. I should come here more often! But first things first. Goathland was indicated, and no time later I recognised its railway station, which is part of the historical, steam-powered North York Moors railroad. I parked the car, changed shoes and was off. 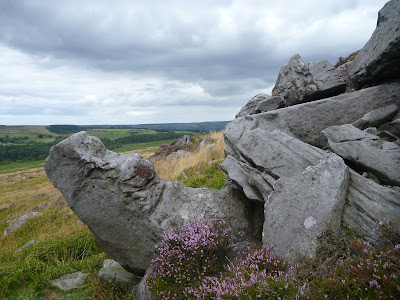 The moors at the start of my walk 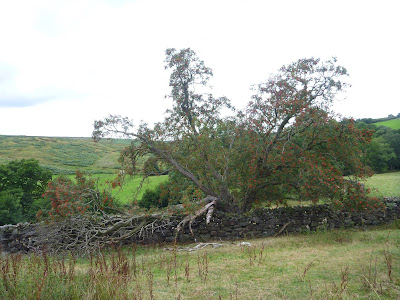 It was a varied route. It started on the moors, which were festooned with signs saying “extreme fire risk”. It then went through farmland, then came through some woodland. And then went past a pub. A pub! When I had gone hungry I had sat down to have my lunch, only to realise I had left my sandwiches at home. Oh dear! But the pub was so kind as to offer me some nutrition. And some company; a friendly family had piled into the chicken coop sized room for a refreshment too. It’s nice to chat away with total strangers. 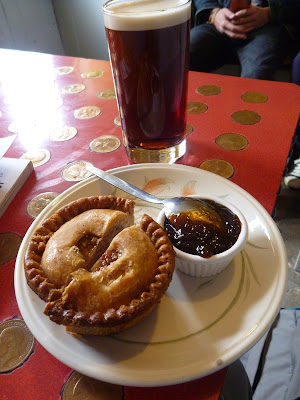 From the pub the path went back onto the moor. That was where the description went vague. After a while I figured I had ended up a bit too far south, but as the paths had not been joined up I figured there must be a cliff or something in the way. I decided to just go on; I did find a path going in the right direction, and it even came with a bonus; I soon heard heavy chugging, and lo & behold, a steam train thundered by. I recognised it as the one of which I have a portrait in my bedroom! We have to stop meeting like this. 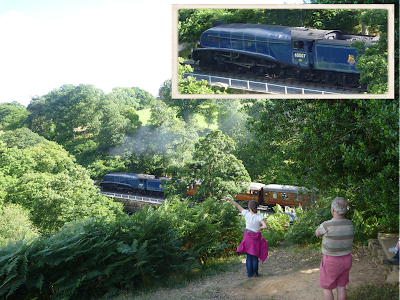 The Sir Nigel Gresley! Such a handsome chap.

Revived by the encounter I went on. The path initially seemed fine, but deteriorated. I figured I would at some point reach a ford, and from there on everything should become clear again. But then I found a path. Which went nowhere. And I got confused. And then I heard “are you lost?” I was. My next question was “am I on your land?” and I was. I apologised. 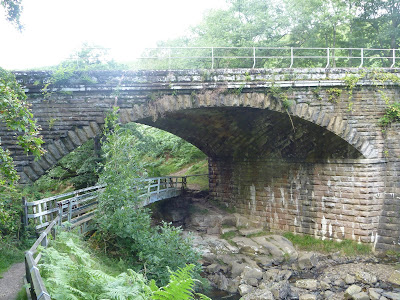 A nice jumble of bridges

The chap, by then joined by three cheerful dogs and a not-so-cheerful man who probably was the chap’s father, showed me to the gate, and said that if I would turn right on the road I would reach Goathland. I asked him if he could point out on the map where I was; he couldn’t. That made me feel better about having gotten lost. But where the road crossed the railway again I realised where I had ended up, and got back onto my route. The last few kilometres were nice, and ended at the very cute railway station. And from there is was only a few hundred meters back to the car. 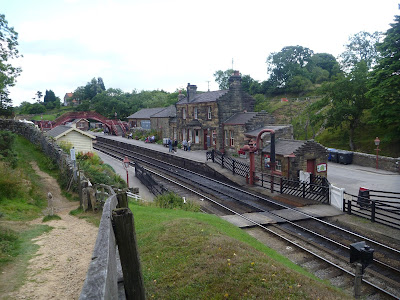 The cute railway station of Goathland

Just outside Goathland I saw it hadn’t been an exaggeration, these fire risk signs; I saw clouds billowing up from the heather. It wasn’t a big wildfire, but it was big enough to have road-blocking fire engines and gesturing men, which provided a photo opportunity. And then I could proceed home! Where the evening still had a pint with friends on offer. It’s good to have a day off once in a while! 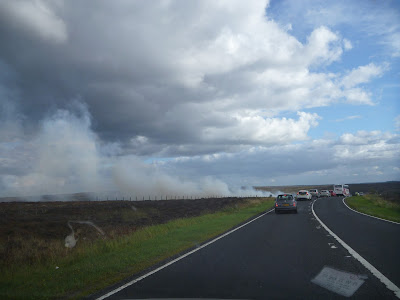 Fire on the Moors!