When we parked for Cwmorthin we saw a beautiful incline on the opposite hill. It seemed to lead into a hole! We figured it would be worth having a look. Laura had been to the top of the incline, and to the quarry she said was behind it, but she hadn't been underground. Matt and Gary had downloaded information on quite a number of nearby mines, including this one; it seemed to be called Wrysgan, and there was mention of some nice little loops one could do. So we went for it! 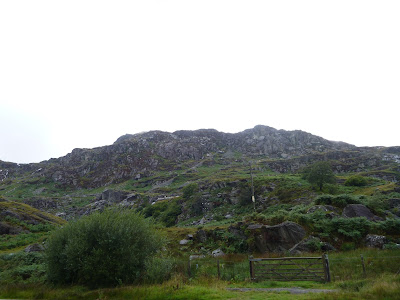 The incline, going diagonally through the centre of the picture,as we saw it the day before.

All further pictures by Gary 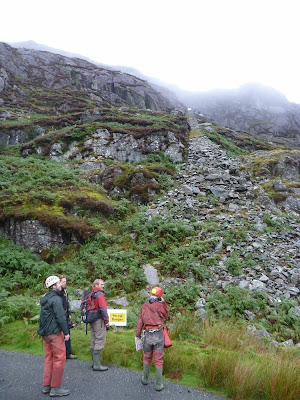 At the foot of the incline. From here you can see it's not a black hole at the top, it's a passage through!

When I tired to take a picture of the rather impressive incline my camera said "this battery cannot be used". What do you mean cannot be used? It clearly works for displaying that message on the LCD screen! And it worked fine the day before! I switched the camera off and back on. I took the battery out and put it back. I tried to clean the contacts. Nothing helped. This battery could not be used. Bugger! 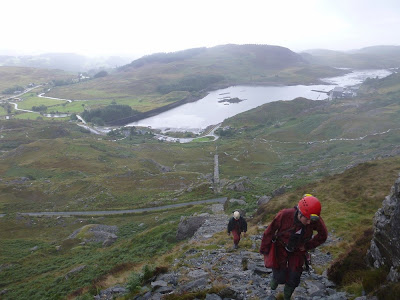 The spiffing view from the incline 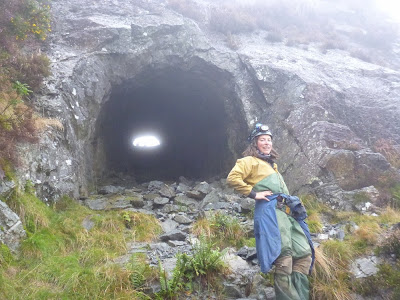 Me almost at the top

We climbed the incline, which had an amazing view over the landscape around (bugger!) and got to the quarry. Now we had to find the entrance! After a while we did; a tunnel at a reasonably steep angle, leading into the rock. And soon we came down to an ENORMOUS stope. This was not a mine like Croesor or Cwmorthin, with separate chambers; here they had quarried away a massive body of rock, at a pretty steep angle. Impressive! It looked a bit like Dinas silica mine. W found ourselves on the top ledge. There seemed to be more levels below, but it was hard to see, even with the brighter lights! But we could go on laterally; there was a robust steel cable bolted into the wall. So we did! And further on we found a rope that got us to the level below.

We followed that level as far as we could. We were stopped by a traverse that was way too dangerous to do without a handline. There were bolts, but we had no rope with us! We tried to make an in situ steel cable stretch across but that just wasn't going to happen. Too bad! But fun to try! 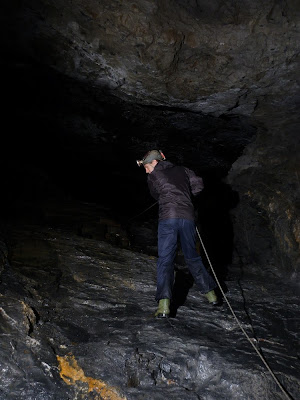 We then went to the other side, and then further down, via a path. We also found a message regarding safety; some levels were declared safe, and others weren't. We could see why; big blocks had been falling out of the ceiling, and there were places where one might expect a bit more of that. But what level were we on? The message didn't say. Hm! Just do what we always do; rely on our own common sense.

We reached the bottom, and checked that level out at its full extent. And when we were sure we'd seen it all we went out through an adit we had seen on the way. It got us out on the other side of the hill! Again with great views. So we enjoyed that for a minute, and then went down. And admired some remains at valley level. And changed. And drove off. We had vacated the hut in the morning, and could go straight back home! Where I would find out that with my other battery the camera did work. So too bad I couldn't document this trip, but I only had to buy a new battery, rather than having to buy an entire camera! So not too bad after all.